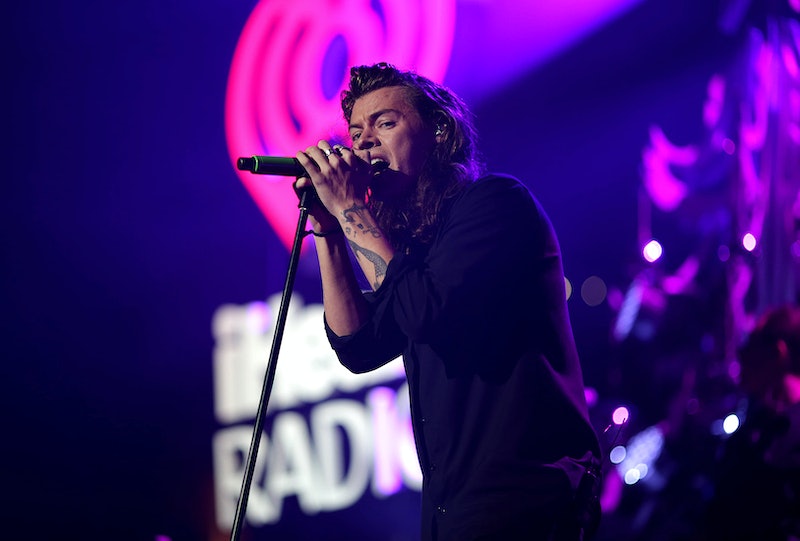 2015 was quite a year for One Direction. Zayn Malik left 1D in March 2015, and then the remaining four-piece announced they would be taking a hiatus after the release of their fifth album Made In The A.M. in November 2015. As the band will be taking an elongated break in 2016 (and possibly through 2017, according to Liam Payne), it seems natural that rumors about One Direction members going solo would be swirling right now. And, like many others, if I had to put money on which band member would be first to release an album (besides Zayn, because like who cares?), it would be Harry Styles going solo in my mind. And the current rumor that Styles has four new songs written makes that even more likely.

Rumors of Harry Styles going solo have been rife for like forevs, even before Malik left the band, or 1D announced that hiatus. While Styles has always been quick to address rumors that he's going solo as false, he's also been busy writing songs for the other artists. Harry Styles has written songs for Ariana Grande and Gavin DeGraw, and has co-written songs on all of One Direction's five albums. It seems likely that Styles will continue to write, and maybe even record, during his hiatus from 1D. Let's document all of those rumors that Harry Styles is going solo, in a super scientific timeline.

2010: Harry Styles Auditions For The X Factor UK As A Soloist

One Direction finished third on The X Factor in 2010. The boys all initially auditioned as soloists, and were put together as a band by the judges. From the start, 1D have been plagued with solo career rumors for this very reason — they applied to the competition as solo artists. Is there still a part of them that wants to go solo?

March 2013: There Are Several Reports That Styles Has Started Recording His Solo Album

In March 2013, UK tabloid Mirror reported that, "Friends say the 19-year-old heart-throb has co-written several of the numbers which he hopes to release on a solo album." The publication also quoted a so-called friend of Styles as saying, “He’s bounced some ideas off his friend Ed Sheeran and has ­already laid down some vocals.” While a collaboration between Sheeran and Styles on a solo effort would be more than OK with basically everyone, nothing materialized from these rumors.

Other reports at this time in The Daily Mail and on MTV placed Harry Styles alone in a recording studio. But a representative for Styles told The Daily Mail, “Harry is not recording solo material... The boys sometimes work up ideas separately as well as working together, as they did last year. Niall for example recently collaborated with Tom and Dougie from McFly on new tracks.” While this excuse almost seems legit, it doesn't stop the solo rumors brewing.

Reps for the band claim that leaked track "Don't Let Me Go" is just an old 1D demo, but are they covering for the fact that Styles has been recording songs alone? Are they?

2013 was a busy year for Styles rumors, with MTV citing a quote in UK tabloid The Sun from Gary Lightbody, the lead singer of Snow Patrol, as saying ,"We wrote with Harry. It was a lot of fun. He’s a real dude actually. We’ve no idea if those songs will make it yet, though." However, these very rumors are shot down in the same article, with a rep for 1D saying, "One Direction always work solo with writers... It saves time, which is so precious for a band under their pressures. The tracks Harry worked on with Gary are 100 per cent for the new One Direction album — and not a solo album.” Surely that's the end of the Styles solo rumors in 2013?

In an exclusive interview with Barbara Walters, 1D refuted rumors that any of them would be going solo, with Zayn Malik saying, "No way. It’s not even, like, a question. We’d just be like, 'No, I’m not doing it.’" Awkward. Harry Styles stays notably silent on the topic.

March 2014: A Source Says That Harry Styles Wants To Be Justin Timberlake

According to Mstars News, a source told heat magazine in the UK that Styles wants to move to L.A. and forge a solo career there. This source allegedly said,"Harry prefers LA because he could be a real star over there. He wants a solo career like Justin Timberlake's." It doesn't sound like a bad plan to me.

Fans go crazy when they hear Ariana Grande's song "A Little Bit Of Your Heart," which is written by Harry Styles.

March 2015: E! News Says That Harry Styles Wants To Be The Next Leonardo DiCaprio

A source tells E! News that Styles has his sights set on Hollywood, as well as a solo career. Speaking at length to E!, the source says, "Harry has distanced himself from the rest of the band over the last year. He considers himself to be on a different path to the other boys. He certainly has hopes of doing solo stuff, branching out on his own." However, this allegedly source was speaking in the wake of Zayn Malik leaving the band, a natural time for rumors to start up again.

June 2015: PEOPLE Claims That 1D Will Stay Together And Go Solo, Like The Rolling Stones

PEOPLE quotes a friend of 1D as claiming, "The boys know that by sticking together they can still pursue everything they want to do as a foursome, as well as individually. And there's no reason why they can't have lifetime careers both as a group and working on their own solo projects — just like the Stones."

According to UK publications The Sun and The Daily Mail, Harry Styles has "managed to work on and record 20 songs already." As One Direction head towards their hiatus, it certainly sounds as if Harry Styles is preparing to release some solo material.

While the legitimacy of the tweets is unconfirmed, Styles having his name on several new songs in listings on the American Society of Composers, Authors and Publishers is sure to further spark rumors that he will be the next to announce a solo career. Judging by his songwriting ability to date, whatever Styles writes next is sure to pop magic.

Whether or not Harry Styles releases a solo album in 2016, One Direction fans are ready for the next step he takes, especially following what feels like a million years of rumors that he's releasing an album! Just hurry up and make it happen already.

More like this
Olivia Wilde & Harry Styles' Relationship Timeline Started With 'Don’t Worry Darling'
By Jake Viswanath
Rita Ora Celebrates Finding Her "Fairytale" Ending With Taika Waititi
By Sophie McEvoy and Catharina Cheung
Why Harry Styles & Olivia Wilde Make A Great Couple, According To Astrology
By Nina Kahn
Twitter Is Freaking Out Over Rihanna’s 2023 Super Bowl Halftime Show Announcement
By Stephanie Topacio Long
Get Even More From Bustle — Sign Up For The Newsletter