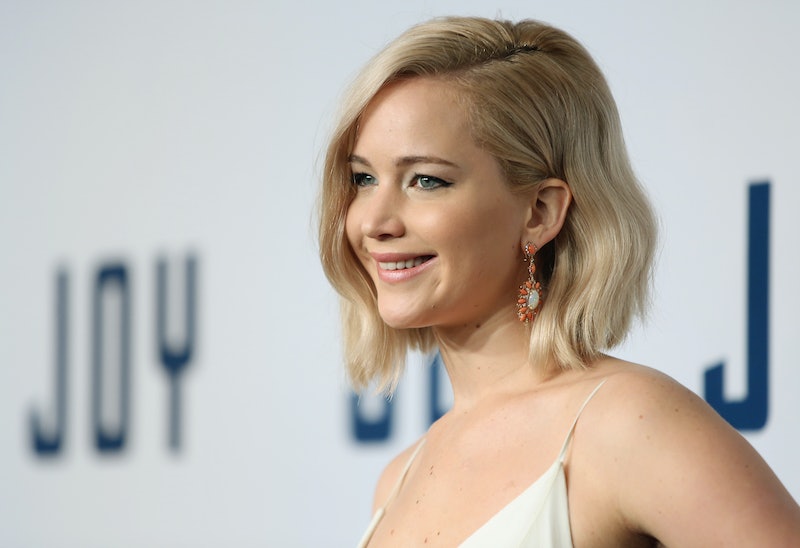 I think it's safe to say that 2015 was the year of Jennifer Lawrence. This year alone, the 25-year-old dominated at the box office and was named the highest paid actress in the world by Forbes. She also spoke out about the gender pay gap in Hollywood, landed a lucrative contract with Dior, and started working on a screenplay with her friend Amy Schumer. Oh, and she was also named Entertainer of the Year by Entertainment Weekly . So it would seem that a star of her magnitude likely has some big plans in store for New Year's Eve... right? Well, not so much, apparently. J. Law just revealed that she actually hates New Year's Eve.

Say whaaaaaat? Yeah, it's crazy but true: The biggest star in the universe right now hates New Year's Eve. She may have a ton of things to celebrate — from having a totally amazing 2015, to a slew of great projects on the horizon for 2016 — but she's not a fan of the whole NYE hubbub.

Lawrence sat down for an appearance on British TV show The Graham Norton Show and told the host her brutally honest feelings about the night when champagne and sequins are a prerequisite, and parties are a given. "I really hate it," Lawrence explained. "I've never had a good one. Everyone's chasing a good time and it's always a disappointment. I plan on doing nothing and then if something lands in my lap... but I always end up drunk and disappointed."

She then quipped, "Drunk and Disappointed should be the title of my memoir!"

Exactly how someone who seems as fun as she does could have a bad time anywhere is uncertain, but I feel terrible that she's had so many bad New Year's Eves. Have no fear, J. Law. I've got a few great ideas that could help you have a fabulous night (and none of them involve going to an overcrowded bar or sweaty house party).

Stay In And Catch Up On Reality TV

A few years ago, Lawrence told Marie Claire South Africa: "At the end of the day there's probably nothing that makes me feel better than junk food and reality TV," adding, "When I'm out, I think about my couch. Like, 'It would be awesome to be on it right now. I bet there's an episode of Dance Moms on. Am I missing a new episode of Keeping Up With The Kardashians?' I'm just stressed by the idea of missing them."

Listen, girl. There is nothing wrong with staying in, ordering a pizza, and having a chill night catching up on your TiVo. You've had an incredibly busy year. Invite some friends over (or don't) — the Kardashians are there for you.

One of the reasons that Lawrence is so beloved is despite her massive success, she always wants to give back to those in need. Her Christmas tradition each year is to visit patients and staff at a local children's hospital in her hometown in Kentucky, and I think she should continue spreading that good cheer by visiting another children's hospital on NYE. I don't think anyone would be mad if she randomly showed up to say hi, and it would end her phenomenal year on a sweet note.

If anyone deserves some fun in the sun, it's Lawrence. She's had a hectic 2015, and all signs point to an even crazier 2016 ahead. She could certainly round up a few friends for an impromptu tropical getaway. Just one thing... since I gave you the idea, can you take me with you? I'll bring the sunscreen! Jet skis not necessary, but would be an added bonus.

Lawrence has admitted in the past that she's both a terrible singer and dancer, but I think NYE is the perfect chance for her to bust out her best Cher on the karaoke stage. After all, even though she doesn't do New Year's resolutions, there's no shame in breaking it down on the dance floor like only she can. We've seen her break it down and it's really not so bad.

I'm rooting for J. Law to have her best New Year's Eve yet!

More like this
Kim Kardashian Father’s Day Tribute To Kanye West Called Him “The Best Dad”
By Stephanie Topacio Long
Dan Levy’s Father’s Day Pic Of Dad Eugene Spoofs The ‘Schitt’s Creek’ Vet’s Past
By Grace Wehniainen
Prince William & His Kids Are Adorable In A Smiley New Photo For Father’s Day
By Stephanie Topacio Long
Selena Gomez Is Fine Being Single, But She Still Manifested Romance On 'SNL'
By Martha Sorren, Jake Viswanath and Jack Irvin
Get Even More From Bustle — Sign Up For The Newsletter