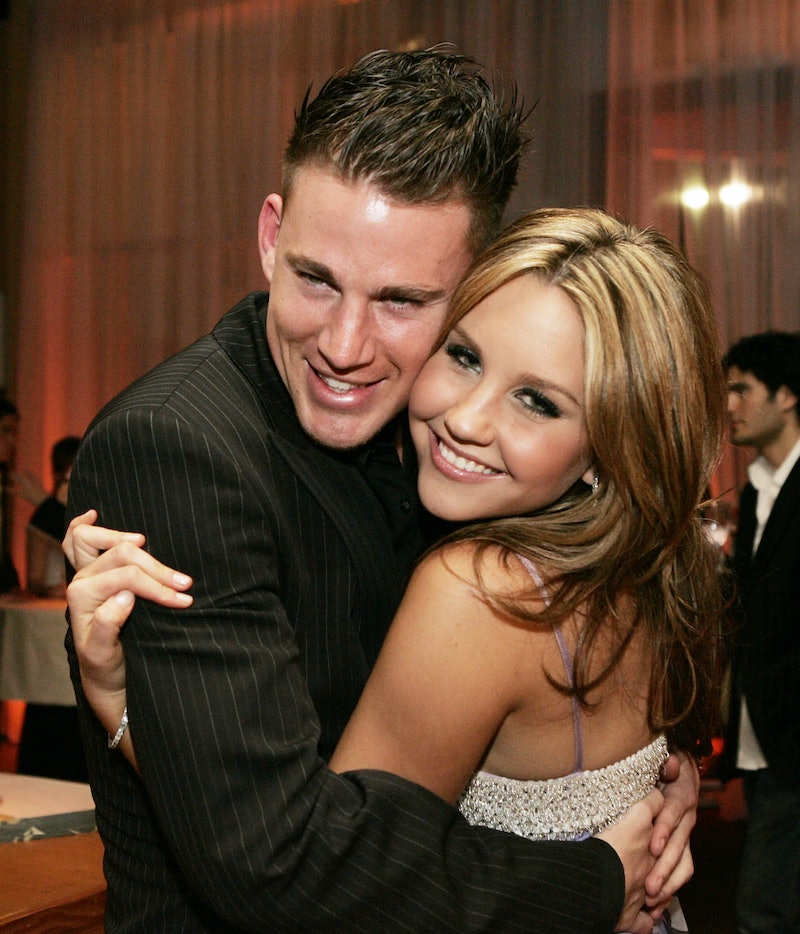 When actors are paired up together for a TV show or movie, they spend a lot of time together in production, while filming, and during promotional efforts after the shoot wraps. It's no surprise that our favorite stars ultimately end up forging very close bonds — after all, most of us end up becoming close friends with people we spend most of our waking hours with every day, if we're lucky (you know those people, your coworkers), so it shouldn't be that different for Hollywood stars. It also shouldn't come as much of a surprise when said co-stars hook up, even if just for a brief fling — hey, if regular people do it, obviously so do celebrities!

Some of the most famous pairings have come from actors who have starred together in a movie or series (Brad Pitt and Angelina Jolie, anyone?), but some co-star hookups have gone so far under the radar you never even realized they happened.

It's hard to believe that anything in Hollywood is kept a secret, but some of these hookups are so juicy and have been hidden so well, no one even knew they were a thing until years after the fact. Here are the juiciest co-star hookups you never realized even happened.

This is one co-star relationship I wish would've actually lasted. The two briefly dated back in 2011 while filming Journey 2: The Mysterious Island. While the romance didn't last, they managed to promote the film with no drama and evade any breakup awkwardness with grace. Props, guys!

Lawrence recently admitted that she kissed Hemsworth off-screen, making all Hunger Games fans' dreams come true. She put it, bluntly: "Liam and I grew up together. Liam's real hot. What would you have done?" I mean, same, girl.

In 2015, Spelling took a polygraph test and admitted that she had a romance with Green (who later married Megan Fox) and one other unnamed Beverly Hills, 90210 co-star during the show's run that she wouldn't cop to. Rumors swirled, but Spelling wouldn't spill. Ah, young love!

Spelling wasn't the only 90210 star with her eyes on a co-star. Doherty and Priestley dated and apparently had some bad blood as recently as 2015, when Doherty accused Priestley of having memory loss about their time together on the show. Though Priestley later reached out via Twitter, and it seems all is well with these two. Whew!

Fans of Dawson's Creek were thrilled that the show ended with (spoiler alert!) Pacey and Joey ending up together, but it seems that Holmes and Jackson also dated in real life! She spoke with Rolling Stone back in 1998, when the show was on the air: "I had really good luck this past year and I had a really wonderful, amazing experience," the actress said. When asked if she was referring to Jackson, she said, "I'm just going to say that I met somebody last year, I fell in love, I had my first love, and it was something so incredible and indescribable." So not only were they the cutest on-screen couple ever, they were just as adorable off-screen. Be still my heart!

This one has never been confirmed, but Bynes and Tatum, then two of Hollywood's hottest young actors, were spotted kissing off-camera a few times while filming their 2006 hit She's the Man. The fling didn't last, however, and Tatum went on to marry his Step Up co-star Jenna Dewan, while Bynes has had her share of public struggles.

Yeah, the two played brother and sister Greg and Marcia on The Brady Bunch, but McCormick copped to a real-life romance with her TV brother. She wrote in her 2008 memoir Here's the Story: Surviving Marcia Brady and Finding My True Voice that Williams was her first kiss. In the book, she said, "Part of me — a tiny part, admittedly — said to myself, 'Oh my God! I'm kissing my brother. What am I doing?'"

8. The Stars Of Saved By The Bell

Even though it was one of the most family-friendly shows of its time, the stars of Saved by the Bell were just like any normal teenagers with raging hormones. They apparently all hooked up at one point or another! Mark-Paul Gosselaar, aka Zack Morris, told People in 2009: "All of us dated at one point or another — it was incestuous!" But Tiffani Thiessen (Kelly Kapowski) added: "Did we have crushes on our costars? Absolutely. But we were so young!" Aw, sweet!

I bet you didn't know these two were co-stars, let alone that they dated. Neither have ever confirmed this, but it's rumored that when Banks appeared on a few episodes of The Fresh Prince of Bel-Air in 1993, the couple ended up dating for a year, way before she was on America's New Top Model and he was a blockbuster film actor. Love it!

They're two major Hollywood players nowadays, but back when they were just high schoolers trying to figure life out on Freaks and Geeks, the two apparently dated for a long time after the show's one season run. It's even rumored that Segel based Forgetting Sarah Marshall off of his breakup with Cardellini, but he told the Los Angeles Times, "I can't control what people think. I was still very much a child [then], and this was more an amalgamation of a lot of different relationships and breakups I've had. People are bound to talk, but she was a great girlfriend."

Though it was never confirmed that these co-stars dated, rumors swirled that Collins and Lautner had a brief romance while filming 2011's Abduction. Lautner had only the loveliest things to say about Collins, telling MTV at the time: "I didn’t know her very well. I had met her a couple times, but she blew me away. She was awesome... She’s extremely talented." Aw!

All Gossip Girl fans have their favorite pair to ship: Blair and Chuck? Serena and Nate? Serena and Dan? Blair and Dan? (Nope!) But it's safe to say no one was expecting Chuck and Vanessa to be an item... but they were for about two years! I guess this wasn't a match in Upper East Side heaven.

Rumor has it, when Fox was on a break from long-term boyfriend turned husband Brian Austin Green, she cozied up to LaBeouf between takes. Fox has since divorced Green, so perhaps she could give LaBeouf a ring?

These two embarked on a year-long romance during filming of their show Ghost Whisperer back in 2009. Hewitt confirmed the news on The Ellen DeGeneres Show , saying: "There are people in your life who are just supportive and who just look at you and they see who you are, and [Kennedy] really saw who I was as a person more than anybody had ever done in my whole life. I think that's for me when I sort of went, 'Oh, wow.' " Sadly, the romance didn't last, but they were awfully cute together.

Yep, Roberts dated her Wild Child co-star back in 2007, and they were so in love, he had her initials tattooed on his ring finger! Pettyfer doesn't regret the tattoo, though. He told Glamour U.K. "I got a girl’s name tattooed on my ring finger because I was in love. We’ve broken up, but I don’t live in regret."

They dated for more than a year despite a sizable age gap (he was 31, she was 19), but the Heroes co-stars were an adorably photogenic pair together.

Woodley has waxed poetic about the fact that she's gotten to kiss a lot of really great looking guys in the name of her craft, and she says she's never hooked up with a co-star during filming. But after? Well, that's a different story. She told Teen Vogue : "I've never even hooked up with anybody I've worked on a movie with." As for afterwards? "Well, that might have happened on something..." She remains tight-lipped about who the hookup was, so only time will tell if his name rhymes with Shmansel or Shmiles...

Though these romances didn't end up lasting for whatever reason, they sure make for some fun and sweet reminiscing, don't they?

More like this
Natalia Dyer & Charlie Heaton's Relationship Is Still Going Strong
By Allyson Koerner and Sophie McEvoy
'Stranger Things' Star Joe Keery Is Dating An "Indie Scream Queen"
By S. Atkinson and Grace Wehniainen
Laura Dern Said “Cultural Awareness” Made Her Rethink This 'Jurassic Park' Fact
By Grace Wehniainen
'Heartstopper’s Kit Connor Admitted His “Fat Crush” On A ’90s British Rom-Com Star
By Sam Ramsden
Get Even More From Bustle — Sign Up For The Newsletter