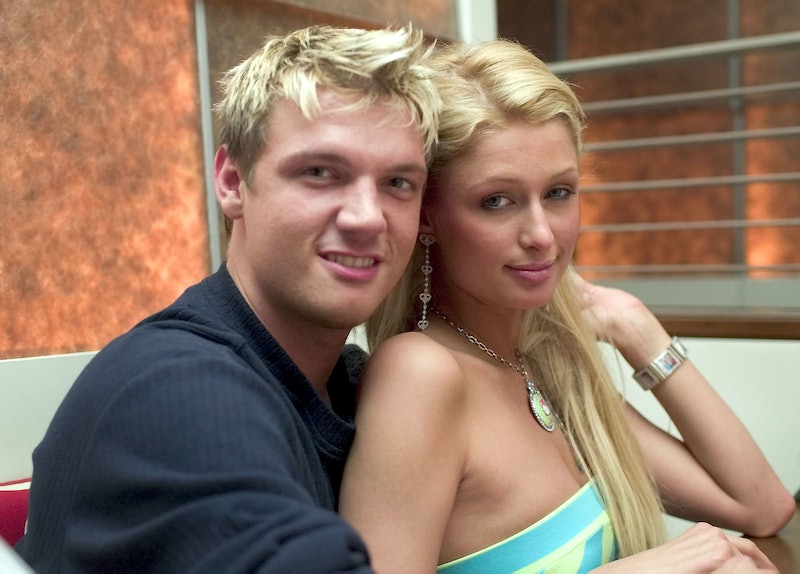 The early 2000s were famous for a lot of questionable things like bell-bottoms, pink-tinted glasses, and braided belts, but one of the greatest things to come out of the time were the ridiculous pop star couplings. At the time, Britney Spears and *NSYNC were on the top of the world and bubblegum pop and boy bands were suddenly on everyone's radar. Sure, we had superstar couples like Spears and Justin Timberlake sitting on top of the pop throne, but there were plenty of other, forgotten pop star relationships from the '00s that deserve to be memorialized, too.

During the early aughts, I remember being very concerned with who Leonardo DiCaprio was dating and calculating our age difference, but the Timberlake relationship was the one that destroyed me the most. I mean, he was totally winking at me and only me in that 50,000 person arena! I eventually did start getting into pop culture and following celeb couples, and it wasn't only because I was jealous. Sometimes these couples were just plain bizarre — and very entertaining.

Here are some of the most interesting and forgotten early aughts pop star relationships to take you back to simpler times.

Willa Ford was the boy band girlfriend who had to deal with the wrath of millions of Backstreet Boys fans. Ford herself was a singer and found brief fame with her hit "I Wanna Be Bad." She dated heartthrob Nick Carter for three years until they split in 2000. She opened for BSB during a 1999 tour and dealt with signs in the crowd reading, "Die Willa." I am glad those girls didn't have Twitter back then 'cause wow...

Right after the Royal Couple of Pop — Timberlake and Spears, duh — broke up in 2002, the *NSYNC singer dated Alyssa Milano for a few months. It seems like they were all good friends and that they remain on good terms today, because Milano recently shared a #tbt of all of them together taken while Brit and JT were still a couple. Milano told Access Hollywood in 2013, “Yeah that’s true, that was right after Britney broke his heart, I swooped in for the kill!”

Recently news came out that Nicole Scherzinger was having a fling with Ed Sheeran, which I thought totally weird (it ended up not being true), but it wouldn't have been her first foray into a surprising relationship. Back in 2000, Scherzinger met and dated Nick Hexum, lead singer of band 311 for four years! There are also rumors that 311's epic hit, "Amber," released in 2001 is written about Scherzinger. It'll never sound the same to me now.

Um, I dare you to tell me that The Ashlee Simpson Show wasn't one of your biggest guilty pleasures in the early '00s. One of the story lines on Simpson's show was her blossoming relationship with singer Ryan Cabrera. She ended up starring in his super cool 2004 video for "On The Way Down," but the two didn't last very long.

Sometime after *NSYNC broke up, J.C. Chasez embarked on a solo career and ended up dating some hot Hollywood starlets. I totally forgot that he had a little fling with Tara Reid, who was it in the late '90s and early '00s. She starred in his video for his solo single, "Blowin' Me Up (With Her Love)." The two were spotted around a few times in 2002, but didn't flourish beyond that.

Ex-LFO lead singer Rich Cronin wrote "Girl on TV" for Hewitt in 1999, and I was always jealous of her for that. The two met through their publicist and dated for about a year and half before calling it quits.

I loved Mariah Carey and didn't really follow her love life too much, but was super stoked when she started dating Luis Miguel, who was a staple in my Latin household — it was like my two worlds collided. After she divorced husband Tommy Mottola, she had a relationship with Miguel. But things don't seem to have ended well as she reportedly denied even know Miguel during a Mexican interview.

It seems like eternities ago that this happened, but it certainly did. In 2004, the boy band star and the socialite hooked up at the height of both of their careers. It seemed like they only had partying in common, and Carter confessed to that fact in his memoir, Facing the Music and Living to Talk About It. He wrote, “Paris was the worst person in the world for me to hook up with.” Burn.

The early '00s seem like lightyears ago, but after some not-so-great relationships, it seems like all of these stars ended up with the right person eventually.

More like this
10 Famous People You Forgot Guest-Starred In The Original 'PLL'
By Brad Witter
Now That 'Renaissance' Is Here, Let’s Revisit Beyoncé’s First Solo Album From 2003
By Grace Wehniainen
The Beyhive Is Defending Their Queen After A Reported ‘Renaissance’ Leak
By Grace Wehniainen
Victoria Beckham Brought Posh Spice Back In A Very Rare Performance
By El Hunt
Get Even More From Bustle — Sign Up For The Newsletter