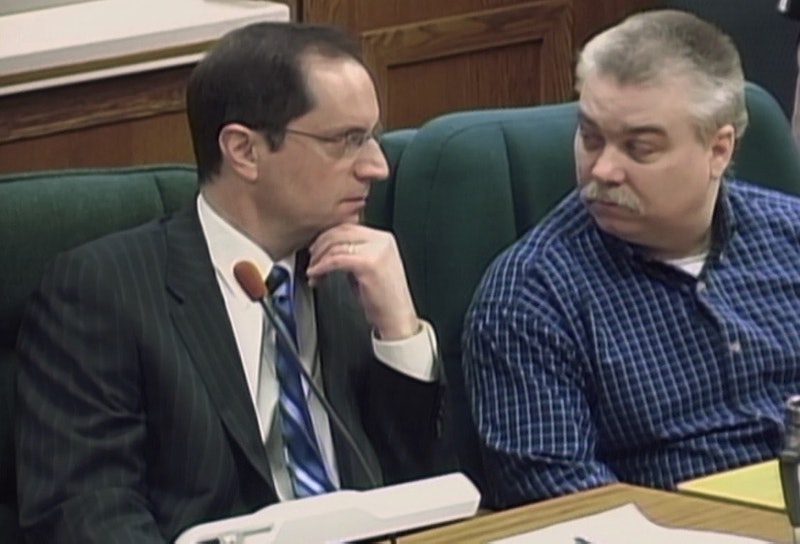 Whether you think Steven Avery is guilty as the courts ruled or innocent as he claims, most viewers can agree that Netflix's docuseries Making a Murderer is both gripping and thought-provoking. In a case that proves truth can be stranger than fiction, Avery was wrongfully convicted of sexual assault and spent 18 years in prison from 1985 to 2003 before DNA evidence exonerated him. Two years later, he found himself arrested again — this time for the murder of Teresa Halbach, a 25-year-old photographer. As viewers saw in the series, Avery's defense attorneys, Dean Strang and Jerome Buting, claimed that the Manitowoc Sheriff's Department had framed Avery — allegations which Under Sheriff Robert Hermann denied in the documentary saying, "It's not realistic. It's impossible ... it's so far fetched it's impractical." Despite his lawyers' best efforts, Avery was found guilty of murder and sentenced to life in prison in 2007. Strang and Buting got a substantial amount of screen time in the docuseries — both in and out of the courtroom. Not only did viewers see them in action during Avery's trial, but the filmmakers interviewed the attorneys at length and showed them discussing the case and visiting the crime scene. So, what do Steven Avery's lawyers think of Making a Murderer?

While many of the key players from Making a Murderer haven't directly spoken out about the series, Strang and Buting have both been vocal. Shortly after the series premiered on Netflix, Strang spoke with The Cap Times. When asked if he felt it was an "accurate depiction" of the Avery case, he responded that he was pleased with it.

In the same interview, Strang revealed that he, Buting, and the entire Avery family received an onslaught of hate mail and threats before and during the trial. Since Making a Murderer debuted, they've experienced the opposite — praise and well wishes have been sent their way. He points out that all the attention he's received, both positive and negative, should probably be taken with a grain of salt:

A lot of it is literate and thoughtful and all that, but both of those experiences are artificial and distorting. Neither of them represent any particular reality other than what’s going on in fevered social media at the moment among a self-selected portion of the population.

Buting hasn't participated in an interview, but he's using his Twitter account to express his thoughts. After not tweeting since July 2014, Buting has been posting frequently after the show's debut. He seems pleased with the series — he congratulated the filmmakers, has shared articles that praise it, and is happy that viewers are proposing alternate theories:

Strang and Buting have both moved on with successful law careers, but they've never forgotten about Avery. Strang told The Cap Times they've visited their former client several times in prison and they've kept in touch: "We correspond. Jerry [Buting] and I both sort of remain pro bono resources to him."

Although they both praise the quality of the filmmaking, the thing Strang and Buting seem most grateful for is that Making a Murderer has spawned petitions and public efforts to re-visit the case. Although Avery has exhausted his appeals, both lawyers seem cautiously optimistic that the national attention will help their former client. In a Dec. 29 interview with People, Strang expressed hope that new evidence could come to light now that so many people are examining the case with fresh eyes: "If it's real and helps the justice system get closer to the right result in this case, you hope that people will speak up," he told the magazine.

Strang and Buting were committed to Avery long before his case was national news thanks to Netflix. They're clearly pleased that people outside of the insular Manitowoc community have taken an interest in the case and are open to exploring the justice system from every angle.

More like this
Tyler Barriss From ‘Web Of Make Believe’ Remains In Prison For Swatting
By Kadin Burnett
Is Ryan J. Vallee From Web of Make Believe Still In Prison?
By Kadin Burnett
This Netflix Doc Shows How An IRS Scammer Uncovered Secret Spy Technology
By Gretchen Smail
How A Political Staffer’s Death Became The Center Of Alt-Right Conspiracy Theories
By Gretchen Smail
Get Even More From Bustle — Sign Up For The Newsletter