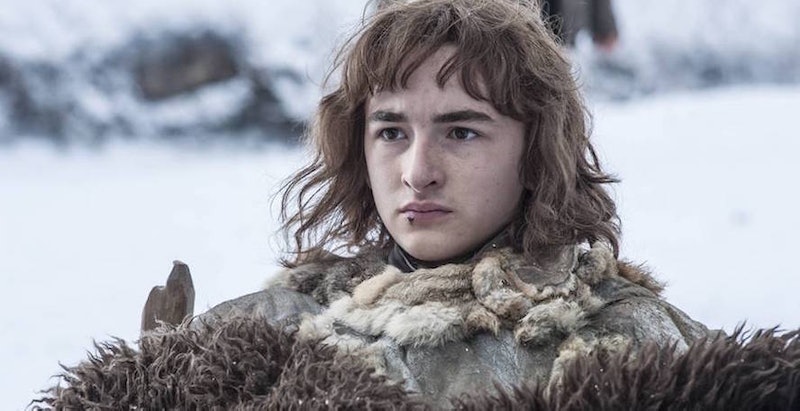 If it seems to you like we've been anxiously awaiting Game of Thrones Season 6 for way too long, you're not alone. In reality, Season 5 ended back in June — and yes, six months is a long time — but we've still got another three or four months to go before HBO starts airing new episodes, if past seasons are anything to go by. There are so many questions that have been milling around in our minds ever since: Will Cersei rise again? What's going on with Arya now that she's blind after assassinating Meryn Trant? Will Sansa and Reek get away? Is Jon Snow alive? The list goes on and on. And while we can't answer any of those yet, we do have a few hints about what to expect courtesy of Bran Stark, who was absent from last season. In Season 6, Bran will see the past, present, and future via visions that he has to piece together like a Westeros version of Sherlock.

Speaking to Entertainment Weekly, Isaac Hempstead-Wright, who plays the youngest Stark, teased an "Inception-y" storyline in which Bran plays a rather large part in the Great War. What that part is, not even the actor knows, but it sounds interesting, to say the least.

"Previously Bran’s seen tiny glimpses of future or past but never has he been very much in control in the situation," Hempstead-Wright explained. "Now we’re given looks into very important events in the past, present and future of this world and Bran is beginning to piece them together like a detective, almost as if he’s watching the show. Equally, he’s now discovering how crucial he could be in the Great War. It’s quite Inception-y."

He also expressed his excitement over reading the Season 6 scripts, saying that they contained some of the best scenes his character has done just yet. That's not hard to believe, really, considering that he was pretty much a child when last we saw him. At worst, he was a pesky kid who climbed tower walls and saw stuff he shouldn't have seen; at best, he was a burgeoning literal visionary with powers of foresight that were completely undeveloped but showed great potential. In reality, he was really annoying, and kind of pointless.

Thankfully, all that seems to have changed. In Season 6, Bran is all grown up, his powers honed and developed, and it's finally time for him to play a bigger role in the war and terror happening in Westeros and beyond. His visions will grant him an insight on the history of the continent and its potential future, and I'm really looking forward to seeing how that all plays out.