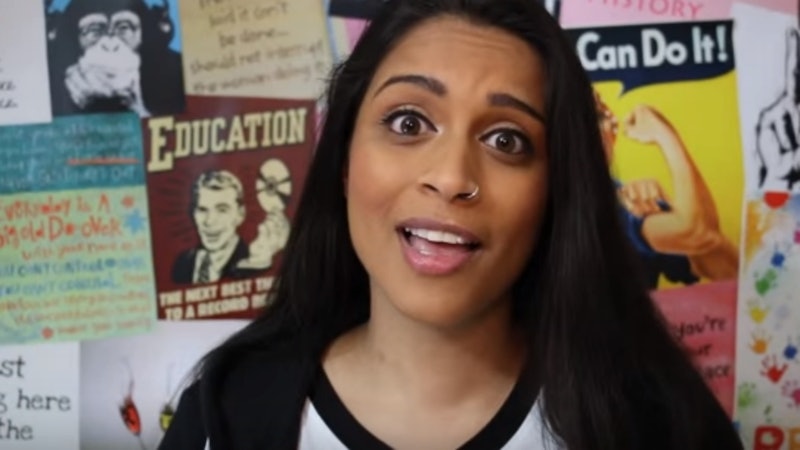 As a writer, I routinely get excited about the news that lands on my desk. Sometimes it's because it's funny, or clever, or useful. And sometimes, it's because it's simply too important not to pass along. Today, the latter is the case when it comes to the #GirlLove campaign launched by Lilly Singh (aka IISuperwomanII) and other favorite YouTubers — along with a little help from Pretty Little Liars star Shay Mitchell — to end girl-on-girl bullying. Because, as Singh points out in the video, "The sad reality is that girl-on-girl hate is such a big issue in schools, at work, or online, and it never made any sense to me because, as women, we know how awesome other women can be."

And how true, right? Women are amazing, complex, beautiful, strong, funny, wonderful beings — isn't it about time we embrace that and empower each other, as opposed to tearing each other down? Singh believes women are ready for the challenge, and she enlisted the help of some of her famous friends to encourage the worthy cause. Stars like Shay Mitchell, Grace Helbig, Mamrie Hart, Lindsey Stirling and more addressed Singh's 7 million subscribers to encourage #GirlLove.

And to remind us we are capable of so many things...

Including change. We are powerful. We are influential. We have within us everything needed to make being kind cool again.

I remember once, when I was young and awkward, being invited by two popular middle school girls to sit at their lunch table. One handed me a piece of candy and, as though it was a proverbial olive branch bridging the gap between me and the cool kids, I eagerly accepted. Only, after scarfing it down, the girls burst into laughter and revealed they had dropped it on the floor mere moments before. Tragically, not only is girl-on-girl bullying like this still prevalent today, but what happened to me back then would be considered child's play in comparison to the kinds of barbs girls and women sling at each other now.

In fact, society seems to promote this sort of behavior — pitting women against each other, baiting them to fight like some modern (and often digital) blood sport. Remember the whole Miley Cyrus/Nicki Minaj drama earlier this year? When Cyrus sat down for an interview with the New York Times, she was asked questions about Minaj. To what end, exactly? After Cyrus responded in a way Minaj felt was disrespectful, the world saw it play out on the VMAs stage, where Minaj ended her speech for Best Hip-Hop Video with, "And now, back to this bitch that had a lot to say about me the other day in the press, Miley what’s good?" From start to finish, the tension between the two stars was manufactured and molded by the media and, sadly, egged on by female fans.

Singh recognizes this and wants women to band together to bring an end to bullying by spreading love instead. For starters, Singh suggests fighting the negativity with positivity by paying another woman a compliment — and she and her friends got the ball rolling.

But they don't want it to stop there. Using the hashtag #GirlLove, you can be part of the change, too. Acknowledge something you dig about another woman and tag it on social media. Women the world over are already following suit.

Such is the importance of this campaign. In a society that so often pushes women into rivalry with each other and which does little to deal with the ensuing bullying epidemic, the #GirlLove initiative seeks to put us back on the same side. So say something sincere. Be authentic and kind to each other. In doing so, we can alter the way women view each other and, most importantly, the way we treat each other. Huge bonus? Singh is donating all proceeds from the video to the Malala Fund, which fights to ensure girls around the world have access to a minimum of 12 years of education.

Moving into 2016, it's OK to resolve to travel more or or any of the other myriad changes many of us hope to make over the course of the next year. But let's make our biggest resolution love, eh? Because we're all in this together and, with each other's support, there's no limit to what we can achieve.

Check out the full video below and keep spreading the #GirlLove!