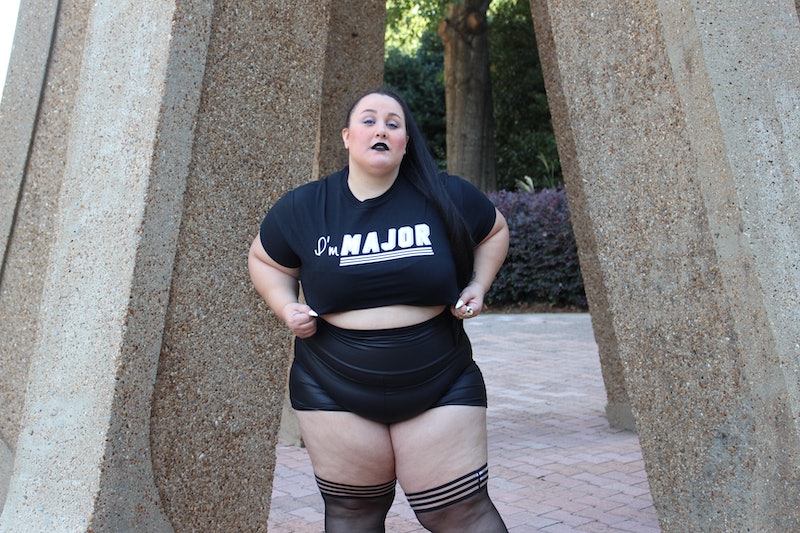 The shapewear versus no shapewear debate is one that can quickly divide the plus size fashion community. And while I think everyone has the right to choose what they want to wear, I am personally pro visible belly outline. I don't go out of my way to show it. But I don't go out of my way not to show it either. I wear what I want, and if my visible belly outline (VBO) shows then that's totally cool.

For a lot of folks, there is still a lot of discomfort surrounding showing off their visible fat and not actively trying to look thinner or hourglass-shaped, so flaunting your VBO can definitely be a radical act, much like wearing a bikini or lingerie as a fat person. But unlike when I post a fatkini image and instantly get fat shamed by strangers, I have noticed that I don't get too much negativity when I share VBO-highlighting pictures.

As a visibly fat person online, body policing is something I have come to expect when I break the so-called rules for "acceptable fat girl dress," so it's quite a surprise that something that was such a challenge for me to learn to embrace would not be troll fodder. So I decided to look back at some of my VBO posts on Instagram to see whether posting such images really wasn't a big deal, or if I was simply missing something.

When I first posted this image back in 2014, it was one of the first times I really let my VBO shine. I shared it again in 2015 and when I saw that there were 41 comments, I braced myself. Reading through them, I saw that someone said, "Um, my actual life goals," while another user wrote, "She don't GAF I love it."

Then I got to the last comment, which reads, "Gross! Cover those horrible legs. Quit fooling yourself. You don't look good in the clothes you pick out. You just look cheap and deranged. I have cellulite at half your size. Nobody wants to see it. Spend your time exercising instead of this garbage." Well, they didn't mention my VBO (LOL). But yeah, this is just about what I expected to see. However, that stranger's opinion has no actual bearing on my life, my feelings about my body, or what I choose to put on it.

This photo was also posted several months ago, and has accumulated 21 comments. I looked through and began to see things like, "You are an inspiration to thousands of women who are plus size," and, "You're so cute and a cupcake." I will definitely take being called a cupcake. I even translated a few of the comments that weren't in English, and they were pretty nice as well. I think someone said they loved me in Spanish. But again, not one mention about my VBO.

I spotted this side angle VBO shot from a story I wrote this summer on plus size athleisure trends. There weren't too many comments here, so it wasn't hard to see that no one had anything negative to say. I did, however, see the words "love" and "cute," so my theory that the world wouldn't break if I shared some VBO pictures was being proven correct.

The fabric on this skirt makes this one of my most VBO-bearing pieces, so I couldn't help but think there would be some negative remarks about it. But a quick peak through the comments section led me to "beautiful" and "daaaaaaaaaaannnngggg," and not a damn thing about my VBO.

I distinctly remember the lead-up to taking this photo. I convinced my cousin who never wears bodycons to try this one on at Fashion To Figure. She wanted to wear the brand's shapewear with it, which was her prerogative. I convinced her to take this picture with me because we both looked cute, but also because she's straight size while I'm plus, and it's pretty rare that we can ever shop in the same stores.

Without even looking at them, I remembered the comments on this one because some dude said, "Loving da Lady in ReD," and I recall my cousin and I seeing that and being annoyed that someone would distinctly call me out instead of saying something nice about us both. But I also remember my stomach writhing in discomfort at the sexualization of that comment and the one that followed it. Yet even in a situation like this where I felt like my VBO was so proudly on display, there was no mention of it specifically.

This image features the same dress as above. So again — because of the VBO shining — I expected to see some comments here. But looking through the section, they are all in the vain of "beautiful" and "babes!!"

Every time I feel as though I need to remind folks that my pages on social media are a safe and positive space, I post this photo. I've probably shared it five to six times over the past two years, and each time — even though my VBO is on display — the comments are mostly a lot of "yaaasss."

I posted this photo specifically to see what the comments would be. One person suggested that I wear a control top, as if tagging #VBO on the photo wasn't enough evidence that I don't want to do that. But the other comments are pretty sweet.

I shared this photo on my Instagram, but it was originally taken for a story I wrote about wearing fat positive tees for a week. This top purposefully showed off my VBO because it said, "I love my rolls," so I thought that the connection would be a given. I don't know whether the "NICE ROLLS" comment was sarcastic or supportive. But either way, I really do love my rolls so it really doesn't matter.

I personally loved this bodycon dress look, and the comments show all the love too! The VBO here is subtle but still there. And the comments include things like "SERVE THEM UP" and "Weeeerk!" Once again, the VBO is NBD.

I posted this photo only a day ago before writing this piece, giving people one last chance to get their comments in for my data gathering purposes. And guess what? Nada! My VBO is proudly showing in this gold metallic dress, but people said things such as, "You look awesome as always, I love your shoes," and "GREAT dress!"

So here's the thing about my VBO and social media: When you're a fat, visible babe online, there's really no difference between showing it off or not. I noticed just about the same amount of comments and likes on VBO images as on #OOTD snaps without it. And guess what? Even during the times when trolls had some kind of problem with it, I never did. And that's all that matters.

So if you're worried about taking the plunge to showcase your VBO or share a belly-revealing snap on your Insta, please try not to be. Maybe a couple of haters will find you, but the world certainly won't implode on itself. And you might just learn to feel yourself in totally unpredictable ways.