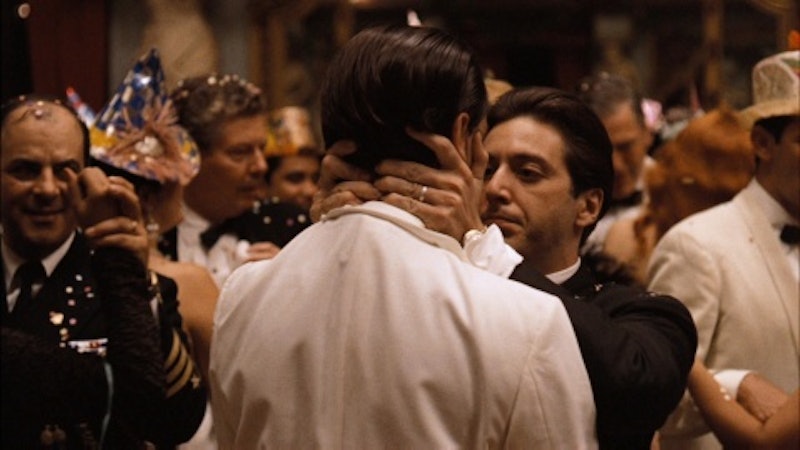 Happy new year, fellow film fans! When one revisits the good times of movies with New Year’s Eve scenes, The Godfather Part II probably doesn't immediately come to mind. A crime drama about the Italian mob in the first half of the 20th century, Godfather Part II isn't your typical holiday-set film, and neither is its New Year's Eve scene. Though it features the usual, celebratory atmosphere of the occasion, the scene isn’t jovial in nature, nor does it end in retribution or happy rebirth like so many NYE movie scenes do. The Godfather Part II ’s NYE scene is sad, scary, and tragic, and though it’s far from a hopeful holiday scene, it's probably the most memorable scene out of the entire three-film series. For that, it deserves a revisit.

To set the stage, it’s the late 1950s and Michael Corleone (Al Pacino) has taken over as the head of the Corleone mob family. He and his brother Fredo are in Havana, Cuba, to scout out possible business dealings. Michael is also on the lookout for a rat in his team; someone who turned on him, leading to an attempted hit on his family earlier in the film. Throughout their time in Cuba, Michael realizes it was Fredo who sided with his enemies, and confronts him in the middle of the party. Michael hugs him, then grabs his head, planting a giant “kiss of death” on his lips. Says Michael, “I know it was you, Fredo. you broke my heart. You broke my heart.”

For viewers who have no idea this twist is coming, the reveal that Fredo is the rat is not only shocking but sad. Here, in a film series where family is the utmost paramount, where everyone has stuck their necks out for their fellow kinsmen, the protagonist/anti-hero’s own brother turns out to be the one who turned on him. It's at this that moment that you realize that no one is safe, not even family. Throughout the first and most of the second film, Michael is willing to kill for his family, and as the result of Fredo’s deception, Michael is now willing to kill his family for his empire. Watching the scene, you just know Fredo is a goner, and though the decision to kill Fredo haunts Michael throughout the third film, New Year's Eve marks a turning point in his character that transforms him from an antihero that audience can root for to an antagonist you're not sure you want to win. Walter White, eat your heart out.

The scene in Havana is also the first moment of The Godfather series that incorporates real world events — world events that, as it turns out, have become interestingly relevant to our current international relations climate. Over the course of New Year’s Eve on Dec. 31, 1958 and January 1, 1959, the reigning Cuban dictator, Fulgencio Batista, abdicated his position as a result of the growing revolution led by Che Guevara and Fidel Castro. The film shows Michael Corleone attending Batista’s own New Year’s celebration, during which he resigns from his rule. A year later, President Kennedy would implement the United States embargo against Cuba, an embargo that, in 2014, President Obama announced would begin to loosen. It’s always intriguing when historical events are presented in film, and even more so when what they echo the current politics of the real world.

So while revisiting New Year’s Eve scenes from old or recent movies this holiday season, it’s only fair to give the atypical, sad, and tense ones a re-watch, especially if they, like The Godfather Part II's, have become an unforgettable part of pop culture. Even people who haven’t seen the film know and often repeat the phrase, “You broke my heart, Fredo.” The tragic events that happen as a result of this film’s party may not be the celebratory kind one might expect from a New Year’s Eve bash, but they deserve respect as some of the most memorable in cinematic history.

More like this
Alicia Silverstone Has Recreated An Iconic 'Clueless' Scene
By Frances Stewart
Chris Hemsworth Joked That Baring His Butt In ‘Thor: Love And Thunder’ Was A “Dream”
By Brad Witter
Kim Kardashian Father’s Day Tribute To Kanye West Called Him “The Best Dad”
By Stephanie Topacio Long
Dan Levy’s Father’s Day Pic Of Dad Eugene Spoofs The ‘Schitt’s Creek’ Vet’s Past
By Grace Wehniainen
Get Even More From Bustle — Sign Up For The Newsletter