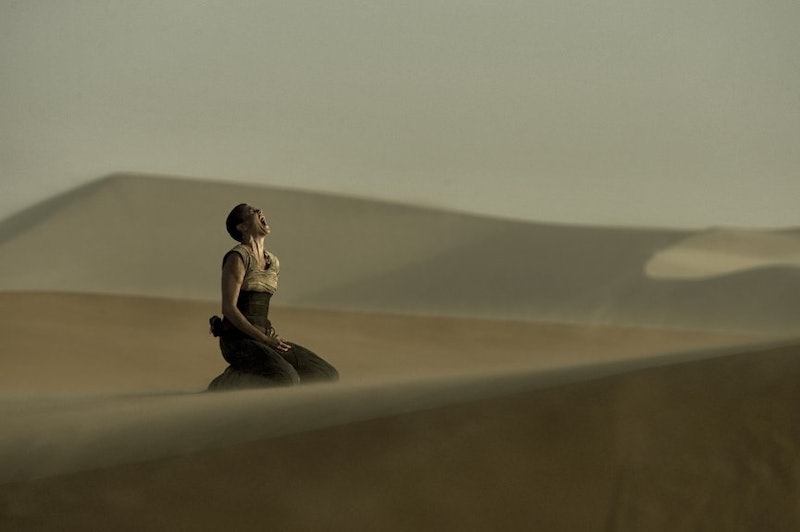 It was the second movie in a double feature, and we crept quietly out of the theater for Tomorrowland as the credits rolled and across the hall of the theater complex into Mad Max: Fury Road just before the previews began. We scheduled the order of our movie marathon wisely. Mad Max had been out in wide release for just over a week and had already received near-universal praise; Charlize Theron's starring performance as Imperator Furiosa received special attention, even alongside the ever-standout Tom Hardy. For, though Hardy's character bears the franchise's title, it's Theron's character who provides the impetus for the narrative. Max is a particularly capable sidekick in this story. That's only the beginning of why Charlize Theron in Mad Max: Fury Road is the performance every woman must see as we near the end of 2015, because 2016 isn't too late to catch up on the good thing you may have missed — a movie that, seven months later, I still can't stop talking about.

It was hard to miss Mad Max: Fury Road back in May, when it was released. The film raked in just over $150 million domestically and nearly $400 million globally. And it generated even more attention for centering women in its narrative, giving them fleshed-out back stories akin to the origins already established for the titular Max. Charlize Theron plays a war-rig driver, Imperator Furiosa, one of Immortan Joe's most trusted underlings and one of the few women entrusted to such an important task in his post-apocalyptic, patriarchal dystopia. He regulates access to water, keeps several waifish sex slaves, some of whom are pregnant with his children, and possesses a stable of women just to milk them. Furiosa uses her position to assist in the escape of Joe's wives, who incidentally have names like Toast the Knowing (Zoë Kravitz) and Capable (Riley Keough). She hides them away in the underbelly of her war rig on a mission to retrieve oil from a neighboring town, turning off course and evading the fleet of Joe's followers behind her. But when the Immortan Joe loyalists (including Nux, played by Nicholas Hoult) catch up, their captive Max escapes and helps the women's flight into the desert.

The whole film is essentially an extended car chase, and the performances are understated, dialogue sparse. Charlize Theron is in top form as the gritty, one-armed heroine looking for her home after growing up under the thumb of Immortan Joe. Much of the back story of her character must be read on her expression — like Max, she says little, but the essential information is there. Mad Max: Fury Road never reveals how she lost her arm, but it doesn't really matter.

There's one moment when Theron's performance comes together, and the power that she wields on screen comes into focus. She realizes that she has led the wives across the desert only to find that the Green Place of her birth has turned to swampland, and they have reached the end of their flight only to see that they were fleeing to nowhere. Furiosa encounters the few remaining survivors from her once-flourishing tribe of women, now a nomadic bunch. And we see Furiosa melt down. She walks several yards away and collapses onto the sand, finally offering some climax to viewers after over an hour of fast-paced chase scenes, explosions, and minimal conversation. This is it, she seems to say, though she really says nothing.

Leah Schnelbach, writing for Tor, notes that this scene exactly parallels Max's behavior when he learns his wife has been killed in the original Mad Max. It adds a layer of resonance that allows Theron's character to truly be the center of a film that bears someone else's name. And while she might be overlooked for precisely that reason — because Tom Hardy plays the title character, even though the Fury Road half is far more significant than the Mad Max part — Theron deserves lasting (read: awards) recognition for the nuance that she brings to the role.

Furiosa crystallizes what it means for Mad Max to not privilege any particular kind of femininity — her character provides the center of a story that features women that consistently defy genre stereotypes. The ostensible damsels in distress — Immortan Joe's own wives — seize control of their own fate, often assisting Furiosa just as capably as she leads them. Furiosa's native tribe, the Vuvalini, offer a matriarchal counterpoint to the backwards civilization of Immortan Joe. There are no men in sight, and Max and Nux alike hardly intrude on the reunion.

And that's why Theron's role is such an important one to depict on screen. It's not just that she's a woman fronting an action franchise; it's that she's a woman who defies the male gaze by centering herself in the narrative. Furiosa is an empowering role for women to view on screen, but it's just as important for men because it proves that they can identify with a protagonist who doesn't necessarily look or sound like them. It's a great piece of cinema and, furthermore, it's all too rare to see a woman starring in an action franchise — especially one that has an established, charismatic male lead who's still present, just in reduced capacity. None of this is to say that Mad Max: Fury Road is only for women. Rather, it's just that women should especially take note, especially those among us (myself included) who might not normally be drawn to an action franchise.

But the Academy, too, should consider Mad Max: Fury Road moving into Oscars season. It already earned three Golden Globe nominations earlier in the month, making it an ever-stronger contender for the top prizes of the year. Mad Max: Fury Road is not Max's story at all. The camera lingers on Furiosa as the film closes, and Max melts away into the crowd, leaving the women to tell their own story to the next generations.