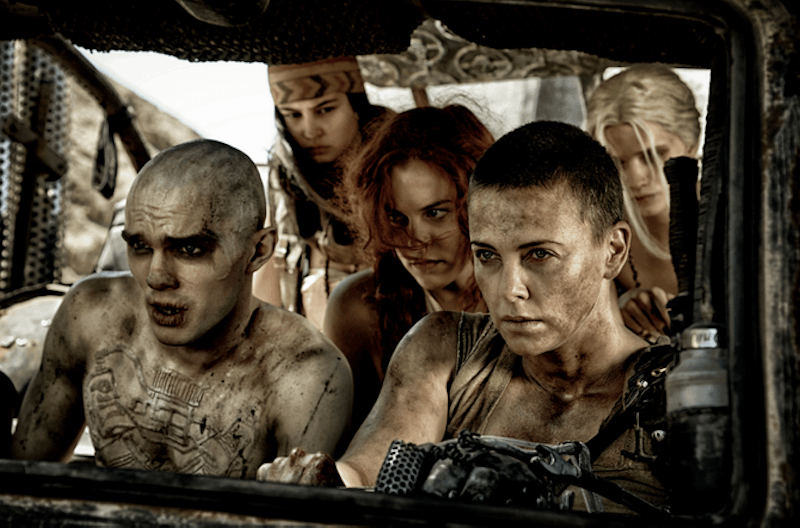 Mad Max returned to the big screen after 30 years, and the Hollywood Foreign Press took notice. The latest installment in the series, Mad Max: Fury Road, is nominated for a 2016 Golden Globe, earning nods for Best Picture — Drama, Best Original Score - Motion Picture and Best Director for George Miller, who previously directed the three other films in the Mad Max series starring Mel Gibson. While Fury Road was this summer's post-apocalyptic blockbuster that starred the most feminist hero probably ever put to film with Charlize Theron's Imperator Furiosa, the multiple nominations come as a surprise, since the Screen Actors Guild recently ignored the film in the major categories.

Rather odd being that the film is being mentioned on many critics' year-end lists — even being named 2015's Best Film by the National Board of Review and earning runner-up for the same title by the Los Angeles Film Critics — and just recently picked up statues for Best Picture and Best Director at the AACTA Awards, dubbed the "Australian Oscars" by many. But, with the multiple Golden Globe nominations, the film may have just earned itself a spot on Oscar's short list. Not that we're too surprised, Bustle did put it on the list of films we'd like to see get a Golden Globe nomination for Best Picture — Drama, even if it seemed like a long shot.

It's a surprise, but not because the film is underserving. It's a visually stunning film hat proves summer action films don't have to slack off when it comes to artistry. Theron may not have earned a nomination for her tour de force performance, but the film's nomination in the drama category alongside well-received films like Carol, The Revenant, Room and Spotlight, is a definite win for women everywhere who hope to see more female action heroes on the big screen. Despite its title, Furiosa is the real star of this film — Max is just her sidekick. If female-driven movies are winning at the box office and during awards season, how can studios ignore their appeal? The truth is, they can't.

It should be noted that there was at least one person who knew that the film deserved to be recognized during awards season: The film's director. Miller recently told Vulture that his film should be considered for nine categories at this year's Academy Awards, including a whole slew of technical awards like Best Film Editing and Best Visual Effects, along with Best Director, Best Picture, and Best Actress for Charlize Theron, who he says “you can dress up as Furiosa, but to be Furiosa, you’ve got to be Charlize."

Seems the Hollywood Foreign Press agreed with him, at least in two of the categories Miller mentioned. And, it seems, Miller won't be taking any nominations for granted, saying, “You work very hard in the tunnel of the movie you’re making, and then you emerge and put some effort out there, but when you get home and now there’s all this new stuff coming back at you, it’s one of the greatest delights." I definitely won't be surprised if these feelings of delight last all the way until January, when the Academy Awards announce their nominees.