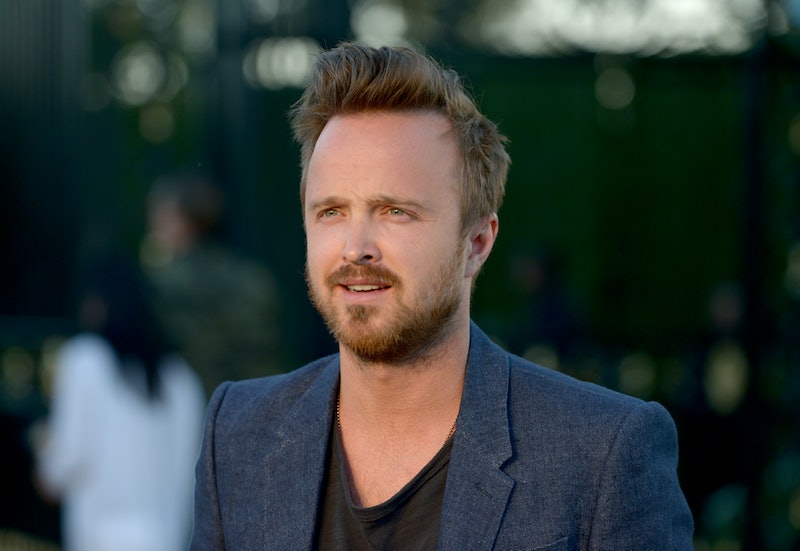 Jesse Pinkman has grown up and matured... and now he's coming back in Hulu's new series The Path as a family man who stumbles into a cult. OK, so the upcoming series isn't a Breaking Bad sequel — but it does look just as dark, which star Aaron Paul thrives on. Case-in-point: Entertainment Weekly has a first look at shots from the show on Wednesday, revealing characters and episode scenes. Even before these new details came out with the pictures, critics were already excitedly anticipating The Path.

The eight great new stills from the series show Paul playing "Eddie Lane, a convert to Meyerism suffering a crisis of faith." Additionally, Hugh Dancy, back from Hannibal's cancellation, is playing the leader of the cult, Cal Roberts. There's a photo of Dancy addressing who I presume are his followers, in a bright light with his huge shadow projected behind him on an eerie photo. (He definitely has the charm to play the leader of a cult, but I've gotta wonder — will he be as good as Jon Hamm as Reverend Richard Wayne Gary Wayne on The Unbreakable Kimmy Schmidt?)

There's also this photo of Paul looking troubled in a car, which there was a lot of in Breaking Bad, so the consistency here is comforting. And clearly he hasn't lost his knack for really, really using his face to convey expression.

Michelle Monaghan from True Detective plays Paul's wife Sarah Lane, a formidable figure in the Meyerism Movement, which she was born into. There are shots of her sitting with her husband in the crowd of cult members (appropriately dressed), and also a more chilling picture of the two of them sitting cross-legged on the floor of a dim room, staring into each other's eyes, supervised by a bald man in a folding chair. If that's not cult-y, I don't know what is.

EW also has photos of other important characters: Mary Cox, played by Emma Greenwell (Shameless), an addict who came to the cult for salvation; Alison Kemp, played by Sarah Jones, who defected from the Meyerism movement; and Sarah and Eddie's son, Hawk (played by Kyle Allen). Minka Kelly will also be in the show, playing, according to EW, "Miranda Frank, the beautiful cult member Sarah suspects Eddie of having an affair with." Sadly, no pics of Kelly yet.

Critics are anticipating the March 30 release of the Hulu series, and even its actors were spellbound by the story. Hugh Dancy told Entertainment Weekly about the script: “When I got to the end of the first episode I wanted to know what comes next, which is ridiculous because I know what comes next,” he said. Aaron Paul gave a very Jesse Pinkman synopsis of the show: "S**t is about to get real messed up."

If that's not a stunning endorsement, I don't know what is.

More like this
Watch Helena Bonham Carter Revive A Soap Legend In Gripping 'Nolly' Trailer
By Bustle UK
Our First Look At 'Vardy V Rooney: A Courtroom Drama' Doesn’t Disappoint
By Bustle UK
Ava DuVernay Thought The 'Queen Sugar' Series Finale Felt “Really Satisfying”
By Brad Witter
17 Photos Of The 'Wednesday' Cast Vs. The 1991 'Addams Family' Cast
By Grace Wehniainen
Get Even More From Bustle — Sign Up For The Newsletter