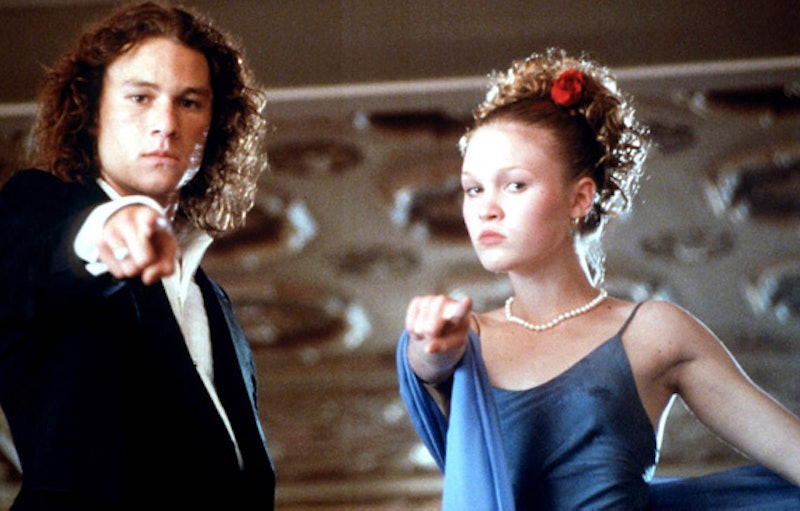 I am convinced the single greatest era for romantic comedies was the '90s. Think about it: The decade gave the world Pretty Woman, Never Been Kissed, Sleepless in Seattle, and basically every other romantic comedy you have ever loved that is not a John Hughes film or When Harry Met Sally. As a result, '90s rom-com couples became the gold standard of relationship goals for the many, many people who grew up watching and loving the endless meet-cutes and bickering-turned-love infused stories. Were all of the relationships healthy ones? Not at all; in fact, in some cases were disturbing... but let's be real, Hollywood has never been known for churning out functional romantic couples.

Still, by the time some of the '90s best rom-com couples finally realized they were madly in love, it was clear they were actual perfection. These couples gave me some lofty relationship goals, but you know what? I think it is perfectly reasonable to want someone to look at you with the same amount of adoration as Hugh Grant and Julia Roberts had for each other in Notting Hill. In short, these rom-com couples are everything a relationship should be.

Two harried single parents find themselves forced into working as a team when their kids both miss the bus for their school field trip. Watching the two career-driven parents share parenting duties on a day when they are at their busiest is one of the most relatable storylines in rom-com history. Jack and Melanie bicker a bit throughout the day, but their similar lifestyles and ability to get each other's situations on every level makes their burgeoning relationship built on mutual respect and understanding the ultimate goal.

Anna is an ultra-famous film star, but there is no Hollywood glam to her on-and-off-again relationship with the charming Will. Here are two people whose lives are vastly different, but who are so insanely good for each other you just want to smush their faces together. They provide each other with a haven of sorts — and when they're together, Anna is "just a girl standing in front of a guy and asking him to love her," while Will is the guy who is already completely mad about her. When the credits role, there is no doubt in your mind that they can go the distance.

In the era of online dating, everyone wants to meet someone who makes them laugh, who just gets them, and who is not a complete weirdo. Joe and Kathleen fall in love through chatroom dates and emails. Their every interaction reveals all the ways their lives just fit together. They challenge each other too! By the end of the movie they are living the 21st Century dream in the 20th Century.

Patrick being paid to go out with Kat? Not at all romantic. Patrick and Kat realizing they are both vibrant outsiders in their high school who compliment each other? Insanely romantic. They may not have the kind of relationship you would aspire to have as an adult, but they were total first love goals.

Jane Austen crafted the ultimate romantic comedies, and the 1996 version of Emma is one of the absolute best film adaptations of her work. Emma's need to find happiness for everyone but herself is as frustrating for the audience as it is for Knightley. The duo share a playful sense of banter and constant yearning for one another that has all the hallmarks of a relationship destined to last well into their old age.

Passion alone cannot sustain a relationship, but I am a sucker for any couple who shares a passion for the same thing — like, say, ice-skating. Doug was a hockey player and Kate was an ice skater, but they both loved being out on the ice and it is ridiculous how satisfying it is when their teamwork gives way to romance. Finding someone who loves what you love with a matching fervor is a rare, but valuable thing.

This movie is so underrated it hurts my soul. After the death of his wife, Jack has to find a way to keep living for his baby daughter Sarah. It takes two sets of grandparents, a neighbor friend, and a nanny, Amy, to get Jack and Sarah back on track. The dynamic between Jack and Amy is brilliant: She refuses to let him wallow, and they slowly fall for each other over time. Instant love is not something I equate with relationship goals, but an earned relationship built over time definitely is.

I know Josie and Sam might be a controversial pick considering he thought she was a student when they started falling for each other, but you guys — they loved poetry and they encouraged each other, and how can you not want that? Unfortunate beginning aside, these two are my dream couple.

Maybe romantic comedies are not the best place to get relationship advice, but for better or worse, these couples make me believe I can have it all — Liz Lemon-style.

More like this
'Love Island's Gemma & Luca Have Very Different Ideas About Their Break Up
By Frances Stewart and Sophie McEvoy
Who Is Pete Davidson Dating? He "Courted" Emily Ratajkowski At A Knicks Game
By Jake Viswanath
We’ve Got A Text! Another 'Love Island' Series Is On The Way
By Darshita Goyal
Why Wasn't Teddi At The 'Bachelor In Paradise' Reunion?
By Brad Witter
Get Even More From Bustle — Sign Up For The Newsletter