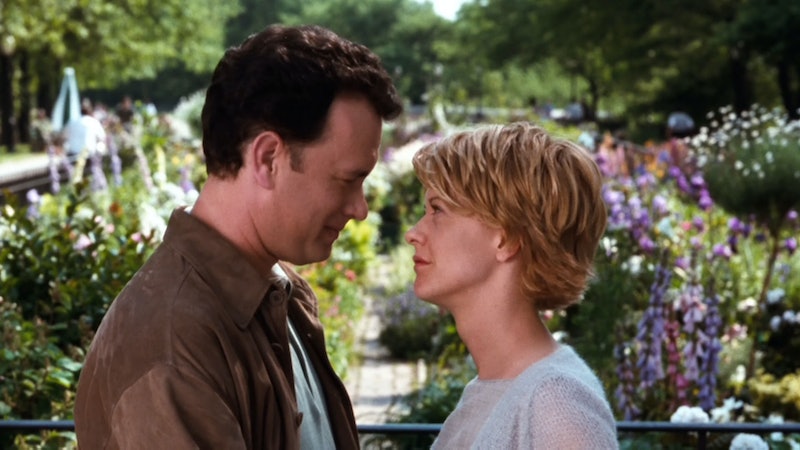 Growing up, I loved watching romantic comedies, both in film and television. But as an adult, I've grown to hate most of them. I mean, I'll still watch them occasionally, especially the classics, (like Sleepless In Seattle and You've Got Mail) but I've realized over the years that most romantic comedies are kind of bullsh*t. Yes, they're super entertaining and, well, romantic, but now that I've dated a few dudes and had one very serious, long-term relationship, I just feel like romantic comedies have been lying to us for years. And, as petty as it sounds, I kind of resent that.

The thing is, as a rule, romantic comedies are just the most ridiculous representations of what falling in love and being an adult is actually like. Most of them set these unrealistic expectations for love and life that gullible, inexperienced teenagers (like my former self) actually end up (sort of) believing for years. To be fair, we have seen more realistic, meaningful-ish portrayals of love and relationships via TV in recent years, (like Hannah and Adam's relationship on Girls and Mindy and Danny's relationship on The Mindy Project) but I'm still not quite over how much romantic comedies have lied to us — because they've done it a lot. Here are the nine biggest lies romantic comedies have told us over the years.

1. You Will Land Your Dream Job Before You Even Graduate College

Girls in romantic comedies are usually rocking these killer, dream jobs by the age of 22, and I think that bothers me more than anything else about romantic comedies, because that's just not how life works. It took me a year and a half to find a decent job after I graduated, and it took me two and a half years after graduating to find enough work to be a full-time writer and copy editor, which is what I actually went to school for. I feel super fortunate that I'm already getting to do this stuff by the age of 25, because some people never get to do what they love full-time.

I suppose some girls land amazing gigs before they've even gotten their diplomas, but that's not the norm IRL, and romantic comedies would have us believe that it is. Even Josie in Never Been Kissed has a killer assignment as an immersion journalist. I mean, a print newspaper actually pays her to conduct a months-long investigation (pretty much an impossible gig to land).

2. ... And It Will Probably Be In Publishing, Fashion, Or Both

With a few exceptions, it seems like all the heroines of romantic comedies work in creative fields, particularly fashion or publishing. The Devil Wears Prada, How to Lose a Guy In 10 Days, and even Trainwreck are all good examples of this romantic comedy trope that just doesn't hold up IRL. Yeah, a lot of women do work in those fields, and those fields are awesome, but women are doing a lot of other things. Where's the romantic comedy about female mechanics? Female marine biologists? I want to watch those rom-coms.

3. Affording A Sick Apartment (Sans Roommates) In A Huge City Is Totally Doable By 24

Perhaps if you're Kylie Jenner or a 24-year-old stockbroker this could be true for you — but for the "average" women being portrayed in rom-coms? The Carrie's with their one column a week and their rent-controlled apartments? I mean, come on! This is ridiculous. Apartments in TV and film are so unrealistic. I will feel so fortunate just to be able to afford a double room in a decent neighborhood when I move to NYC in October, and I'm a 25-year-old working full-time.

4. If You Do Have To Have Roommates, They Will Be Awesome

The closest thing I've ever had to a roommate was when my ex boyfriend and I lived together, and while that could be really fun at times, I have a feeling having roommates won't be as cool as Greta Gerwig's character in No Strings Attached. I'm really hoping I'm wrong about this.

5. Cabs Are Totally A Thing You Can Afford On A Regular Basis

Lies! Cab rides are for emergencies and/or short distances only. At least they should be if you're a young, creative type like nearly every single romantic comedy heroine ever.

6. It's Normal To Practically Hate Someone Before You Fall In Love With Them

Like anyone would have been able to hate Heath Ledger's face, even for a minute. And I love Katherine Heigl, but pretty much every romantic comedy I've ever watched her in (The Ugly Truth, 27 Dresses, Knocked Up, etc.) takes us on her journey from near-hate to head over heels in love. That's insane. I've never known anyone in real life to go from disliking someone super hard to being madly in love with them, no matter how much time passes, or how many times they watched You've Got Mail. Plus, it's just weird. I don't think most of us would even want that to be our love story.

7. Compatibility Doesn't Matter As Much As Love

Wrong. Compatibility is most of what matters. Love is never enough, and wanting different things and having clashing personalities isn't romantic. It's miserable, and it will not work. Yet I can't think of a single romantic comedy that opens with two well-suited people who end up dating for a long time without breaking up, and then get married. I guess that wouldn't be as compelling of a storyline. Sigh.

I wish this was true, and romantic comedies would have us believe that it is, but it's just not. Some fights do end in really great make up sex, of course, but unfortunately that's not always the case.

Romantic comedies, and just romantic movies in general, always have to have a jealous boyfriend moment, and I used to think that whole bit was so romantic. But the older I get, the more I realize that jealousy isn't romantic — it's stressful and it sucks. Obviously, some jealousy is perfectly normal, (I know it doesn't always take much for me to feel jealous in relationships) but Edward Cullen/Christian Grey-level jealousy is just the worst. There is nothing appealing or sweet about someone who is that insecure and controlling. That's not romance, that's emotional abuse. Sorry, but it's true.