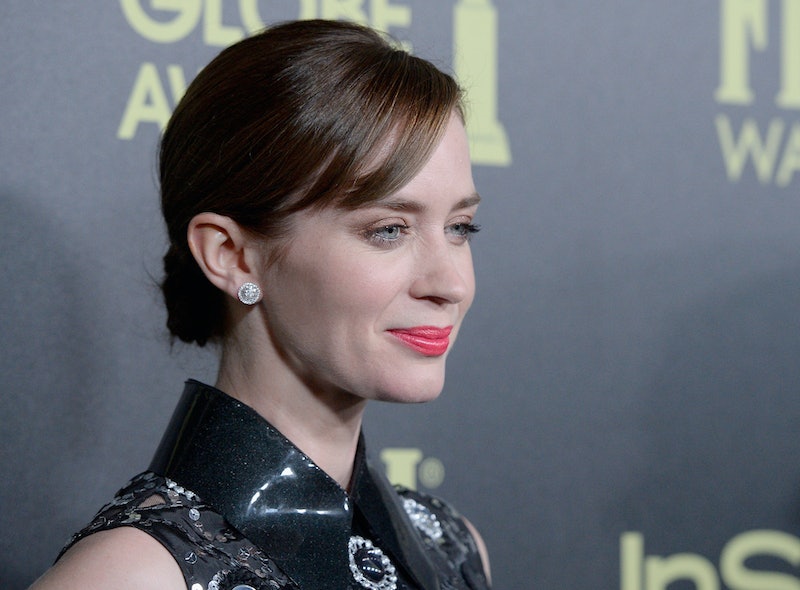 2016 is shaping up to be the year in which Emily Blunt completes her domination of Hollywood. Next year, Blunt will freeze out the competition as Charlize Theron's Ice Queen sister Freya in The Huntsman: Winter's War. Then she'll headline the big screen adaptation of the best-selling novel The Girl On The Train , which is being touted by many as "the new Gone Girl ." This comparison is both complimentary and concerning to author Paula Hawkins, who published her debut novel in January of this year.

"It’s flattering to be compared to Gone Girl because I think Gone Girl is a great book," she told TIME in an interview coinciding with the book's publication. "I don’t know if those same types of comparisons are made for books written by men. Certainly, there is a tendency to lump women who write similar types of books together, and it’s not just in crime, is it? Women’s fiction is supposedly a whole genre of itself. There’s no male equivalent."

While Hawkins is completely correct that we shouldn't automatically lump our entertainment (whether it be books, movies, etc.) into categories simply because they're created by men or women, it's also true that there are a remarkable number of similarities between the upcoming film adaptation of her novel and David Fincher's acclaimed thriller.

Certainly this is where most of the comparisons between the two stories come from. Amazing Amy is one of the most memorable female characters to have been portrayed on the big screen in recent memory; The Girl On The Train's Rachel Watson is similarly complex — and just as flawed. After Rachel's husband left her for his mistress, her life spiraled into a cycle of drinking and despair. Unemployed, she rides the train every day while pretending to look for work, instead obsessing over the picture-perfect life of a young couple she rides past every day. There has rarely been a protagonist as difficult to like and sympathize with as alcoholic, self-pitying Rachel. It should be fascinating to watch an actress as likable as Blunt bring her to life.

While both Gone Girl and The Girl On The Train are both mysteries, this is actually one aspect in which they diverge. While the former centered around a missing persons case, the latter is a more straightforward murder mystery. There is a corpse, there are clues and red herrings, and ultimately there's a cut-and-dried solution that brings the story to a satisfying conclusion in a way that Amazing Amy's disappearance, with all its false leads and ambiguity and murky motives, could not.

Perhaps even more key in the comparisons between the stories than their flawed female characters are the fact that you can never trust anything those characters are telling you. In Gone Girl, it quickly becomes clear that Amazing Amy's diary entries are complete fabrications, crafted solely to mislead the reader and create a false impression of the case. In The Girl On The Train, Rachel's alcoholism causes her to experience frequent blackouts — and if she can't trust her own faulty memory of events, then why should we?

Fincher's Gone Girl was remarkably faithful to the world sketched out by author Gillian Flynn. (It helped that she adapted her own novel to the screen.) The Midwestern setting of that novel was so essential to its story that it's difficult to imagine it taking place anywhere else. But, as Entertainment Weekly revealed in their recent exclusive on the film, director Tate Taylor (The Help) has relocated the events from London to Manhattan and its suburbs — although Rachel herself will remain British, allowing Blunt to employ her natural accent.

One odd similarity between the two film adaptations is the connection they share to HBO's acclaimed drama The Leftovers. Actress Carrie Coon, who plays fan-favorite character Nora Durst on that show, appeared in Gone Girl as Margot Dunne, the supportive twin sister of Ben Affleck's character. In The Girl On The Train, Justin Theroux, who plays Nora's boyfriend Kevin Garvey on The Leftovers, will be playing Rachel's ex-husband Tom.

In a year that continued to highlight the disparity of women filmmakers behind the camera in Hollywood (a study published in October showed that only 11 percent of 2014's top 250 films had female screenwriters), it's nice to see that both Gone Girl and The Girl On The Train made an effort to include actual women in their women-driven stories. While both films were directed by men (Fincher and Taylor, respectively), both films were scripted by women: Flynn, who adapted her own novel, and Erin Cressida Wilson (above), who adapted Hawkins' words to the screen. It's no surprise to learn that Wilson has written several films featuring equally complex and flawed female protagonists, including the 2002 Maggie Gyllenhaal dark comedy Secretary, the 2006 Nicole Kidman-starring Diane Arbus biopic Fur, and the 2010 Julianne Moore thriller Chloe.

More like this
This 'Hunger Games' Alum Will Star In A New Medical Drama Titled 'A Mistake'
By Alyssa Lapid
One Powerful Quote In 'Doctor Strange 2' Is Going Viral On Twitter
By Alyssa Lapid
Sandra Bullock, Girlboss Extraordinaire
By Matt Harkins & Viviana Olen
Lisa Marie Presley Reviewed Baz Luhrmann’s ‘Elvis’ Movie On Twitter
By Grace Wehniainen
Get Even More From Bustle — Sign Up For The Newsletter