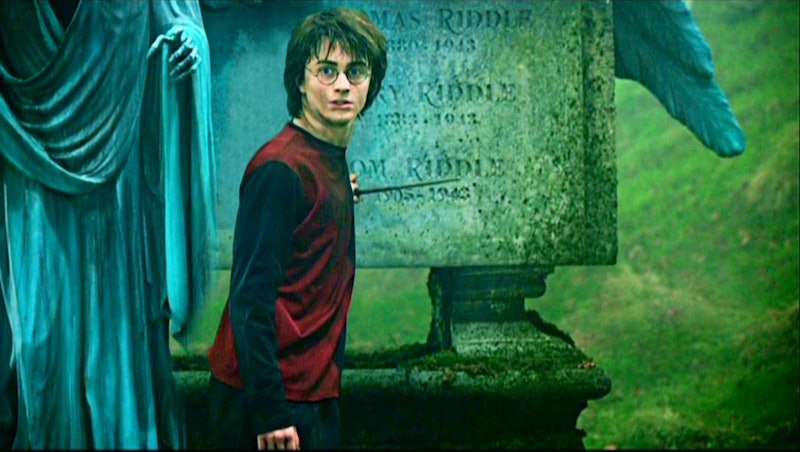 If you're a Harry Potter fan, chances are you already know every single Harry Potter plot twist by heart. It doesn't phase you that Remus Lupin is a werewolf, or that Hagrid is a Half-Giant, or that Dobby was the Malfoys' house-elf all along. But remember the first time you read those books? Your mind was probably BLOWN by all those twists and turns.

I mean, if you grew up with Harry Potter, there were a solid couple of years when the question "is Snape evil or not?" could spark an hour-long debate. People got into screaming fights about whether or not Ron was going to get killed off in the last book (or was that just me?). There were a few weeks when no one was allowed to talk about Sirius Black's death because some people hadn't finished the book yet. And there were entire books written trying to predict when and how the series was going to end.

Even if you remember every detail of those books, from Nearly Headless Nick's death-day party to Winky's drinking problem, it's always worth remembering just how sneaky some of those plot twists were. In retrospect... sure, it's easy to pick up on the clues and foreshadowing. But at the time, we never saw them coming.

Yeah, sure, now it's easy to breeze through the first book and know that Quirrell's got an evil wizard sticking out of the back of his head. But the first time through that book, it really seems like Snape's the bad guy (well OK, it seems that way on and off through all of the books). J.K. Rowling did a good job of keeping Voldemort under wraps, so to speak. (Also, how embarrassing was it for the Hogwarts teachers that a bunch of 11-year-olds passed all their security tests?)

The first book only really had the one huge, mind-blowing plot twist. But the second book served up Parselmouth Harry, possessed Ginny, framed Hagrid, and a giant secret snake monster. The biggest twist by far, though, was Tom Riddle turning out to be Lord Voldemort (also that he apparently turned out to be a fan of word jumbles). At this point in the books, we knew nothing about baby Voldy, or his horcruxes, but The Chamber of Secrets introduced both key plot points. (Although, why didn't Hogwarts rescind Tom Riddle's award once he became evil? I feel like that would have been a no-brainer...)

3. Scabbers Is Actually a Full-Grown Man

Ron's PET RAT was actually a FULLY GROWN MAN. If that's not the creepiest thing you've ever heard, you are lying. I mean, yes, it made for a great twist: Sirius wasn't after Harry at all, he was after Peter Pettigrew, who is the categorical worst. But this twist was doubly shocking because we'd already known and loved (well, kind of liked) Scabbers for three whole books. Scabbers slept in Ron's bed. This twist also set up the possibility that characters aren't always the person (or species) they appear to be.

4. Sirius Black Is An OK Dude

The third book had it's own slew of plot twists (werewolf Lupin, the time-turner, Harry saves himself from dementors, SCABBERS), but Sirius Black turning out to be a good guy was the main reversal. Sirius Black may not have been an ideal godparent (look, I love him but he's not exactly godfather of the year), but he was certainly not the mass-murdering lunatic we thought he was. Total drama queen? Sure, but still not a death-eater. Goes to show that the Ministry of Magic doesn't always make the right call.

5. The Triwizard Cup Is a PORTKEY

Say WHAT? I think it was during Goblet of Fire that I totally lost faith in the Ministry of Magic. I mean, no one ran any safety checks on any of this Triwizard Tournament stuff? No one was like, "let me just double check to make sure none of the children are likely to die or be transported to a horrifying graveyard full of death-eaters"? Sure, we probably knew that it wasn't going to be a simple ending with Harry winning everything and living happily ever after, but who could have guessed that a Hogwarts student would die? This was a huge twist, only to be followed by another huge twist...

...because Mad-Eye Moody turned out to be Barty Crouch Jr. in disguise. This twist had such an impact because it followed so closely after the graveyard scene. We think that Harry's finally escaped, and he's safely back at school, but NOPE. This reveal did have a bit of foreshadowing — Harry sees Snape in Moody's foe-glass, for instance, which means that Snape and fake-Moody are not on the same side. But still, this one packs a punch because it's the second huge twist of the book, and can't Harry ever catch a break?!

7. Snape Is the Half-Blood Prince

As the books go on, there are more and more secrets to unravel. Look, it's not that there weren't plenty of twists and turns in the fifth book (the prophecy, Voldemort tricking Harry, Sirius dying), but the sixth book had one titular mystery that Harry spent the whole year trying to solve: who was the Half-Blood Prince? And then it was Snape. Looking back... of course it was Snape. But at the time, how could we have known? Yeah, Snape was into potions, but this was still the biggest twist centered around Snape. And THEN:

Why must you be the cause of all the biggest plot twists, Snape? This one, of course, was a double reversal: first, Snape kills Dumbledore, completely reversing Snape's role as an unpleasant good guy. Then we find out (much later) that Dumbledore bullied Snape into killing him, so Snape was really just following orders. And he was saving Draco Malfoy's skin. And Dumbledore would have died anyway, because he was foolish enough to put on that cursed ring. But the ring was actually a horcrux. But it was also the resurrection stone of the Deathly Hallows. But Dumbledore secretly just wanted to use it bring back his baby sister. Are you dizzy yet?

9. Dumbledore Had a Crush on Grindelwald

Ok, so it's not completely explicit in the books that Dumbledore was in love with Grindelwald. But the reveal of Dumbledore's family history was an entirely unexpected turn. After six books of thinking that Dumbledore was a doddering old genius, we suddenly find out that he's a human being with a lot of baggage (and some really problematic opinions). The reveal of Dumbledore's backstory deserves a mention, but it's revealed piecemeal throughout The Deathly Hallows, so suffice it to say that the noblest wizard we know used to be (romantically) involved with one of the most evil wizards in all of history.

Is Snape the worst? Yes. Is he the very worst? Not quite. His obsessive love for Lily doesn't excuse the fact that he was prejudiced and extremely mean to children for no good reason at all. But it does make him a more interesting character, and it does explain why he switched sides. Even though it's really creepy that he chose to hug a corpse instead of saving a crying baby, but I digress. Because it's one hell of a twist. Did any of us start the seventh Harry Potter book thinking it would end with a flashback to Snape and Lily Potter on the playground as children?

I mean... it's pretty hard to top this one. The seventh book was chock full of plot twists, but the biggest one of all was that Harry was a SECRET HORCRUX. Well, that and that he kind of sort of died and then came back. This was one of those revelations that came completely out of left field, but then makes total sense when we piece it all together. It explains all of his strange connections to Voldemort, and the fact that he gets to cheat death not once but twice. And it was the perfect twist to end on.