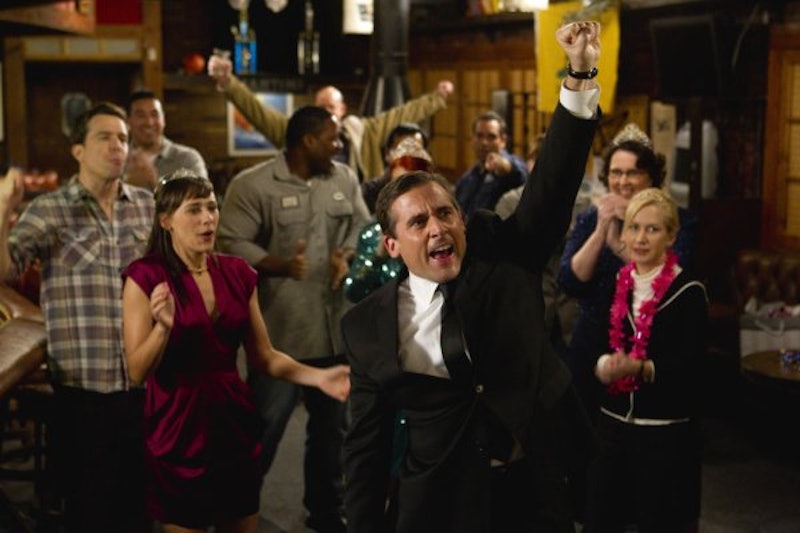 You know what they say: when one door closes, a window opens. And, well, the news that Rashida Jones as signed onto star in Steve Carell's TBS pilot, Tribeca following the depressing reality that was coming to terms with her departure from Parks and Recreation next week, is one hell of a window. Because from what we know of the series' premise already, we're in for a walloper of a good TV time of the absurdist variety.

Plus there are so many things to like about it. Like, so many. The series will be co-written by Carell and his wife, fellow actorperson Nancy Carell, and take a satirical look at police procedurals. (Sounds spoofy!) Fronted by the title-giving character Angie Tribeca (played by Jones), Tribeca will be an absurdist take on the genre, as evidenced by the whole thing being set at LAPD's highly elite RHCU. (That's "Really Heinous Crimes Unit" for all you on the outside of serious policework.)

And what's more, is there's hope for even more stellar casting, as the project is said to explore the whole group of folks investigating crimes in the RHCU. But, as a 10-year veteran and lone wolf type, Angie doesn't take too kindly to the news that she must now work with a partner. Which is great for all of us as television viewers because a.) it leaves room for a truly amazing casting choice for Tribeca's partner, and b.) comedy. The rest of the gang is said to be brilliant but eccentric in that only-on-crime-shows sort of way, all the while revealing far too much information about themselves as they aggressively hunt for justice to be served.

It's nice to see cop procedurals get the satirical treatment, as the often stuffy and overstuffed genre has a penchant for self-seriousness that makes it the perfect fit for comedy antics. (I mean, hey: just look at Brooklyn Nine-Nine.) And with Carell and Jones at the helm, it's sure going to be hard to beat. thatswhatshesaid UGH HOW DID THAT GET IN HERE?