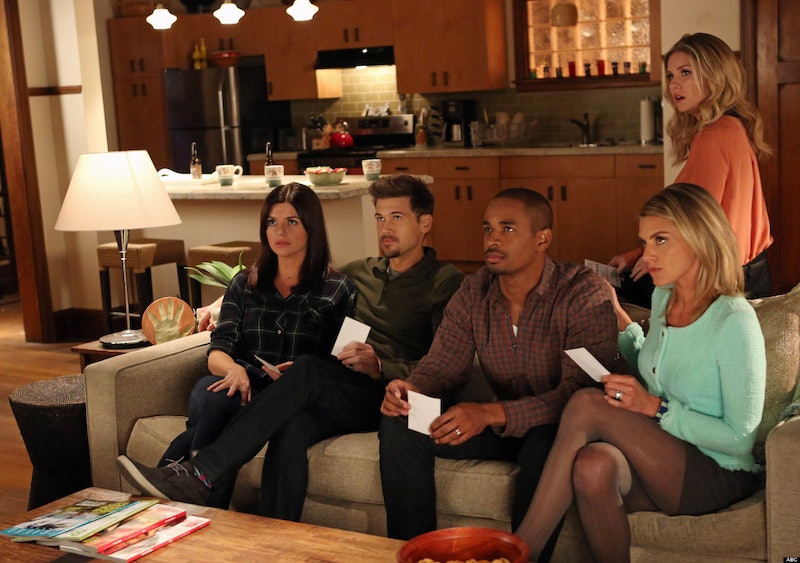 It's the Year of Penny again! In other words: Hulu is streaming Happy Endings in its entirety right now. That means every episode of the three-season wonder that properly introduced the world to Adam Pally, Casey Wilson, Damon Wayans, Jr., Eliza Coupe, Zachary Knighton, and the comedic genius of Elisha Cuthbert is just a click away. Seriously! There is no news better than this. Whether you were devoted to Happy Endings' perfectly off-kilter sense of humor, or you are a total newbie to the hilarious comedy, trust me — by watching or rewatching this show, you have so much joy in your future. Glorious hipster takedowns, majestic displays of rib eating, and wildly inappropriate mother/daughter duets (featuring Megan Mullally!) are just a small sample of what the axed-way-too-soon Happy Endings has to offer.

As a purist, I think you should eventually watch the series in its entirety because it is as close to flawless as a comedy built on cramming as many laughs per minute into each scene can be. However, the beauty of Internet streaming is that you can choose what episodes to start with — and whether you're new to the show or returning to it, there are a few episodes you should definitely make sure to hit up before anything else. So, when you can watch any episode you want, then go straight for those deep cuts, because Happy Endings at its best was funnier than pretty much anything ever.

The show first showed signs of greatness when Max decided to come out to his parents. Before he tells his parents he's gay, he recruits competitive sisters Alex and Jane to pose as his girlfriends. The results are a fiasco of epic proportions, and that's not even mentioning Penny's new boyfriend with the super unfortunate last name. Happy Endings wasn't big on emotional moments, but this is about as warm and fuzzy as the show ever got.

Some episodes of television are so perfectly constructed from beginning to end that they make you sad because you know you will never see something quite so flawless again. This is one of those episodes. Zombies, hipsters, food trucks — that is all you're getting out of me.

The Year of Penny commences! There's also a spinster's curse and an unfortunate incident with an oyster shucker. Picking an MVP in a cast as solid as Happy Endings' is impossible, but Penny-centric episodes never disappointed.

Mullally's first appearance culminates in a wonderfully uncomfortable performance of Natalia Imbruglia's "Torn." It is "ah-mah-zing" what a watchable mother/daughter duo Mullally and Wilson are, so this is a must-watch episode.

Baby Max is a sight you can never unsee. That is mostly a good thing.

James Wolk guest stars as Max's perfect boyfriend Grant, and the show gets crazy romantic for a second... but Brad gets a little too drugged up at the dentist's office to balance things out.

I'm sorry, but there is nothing not to love about a show that has one of its characters go into "bear mode" during winter and rely on a couple's argument to herald the arrival of spring.

The group comes together to end Penny's birthday curse in an episode that utilizes the entire ensemble. Seeing the entire cast play off of each other at once only reinforces how special Happy Endings was.

The gang watches their unaired episode of Real World: Sacramento and I almost died from laughter. True story.

If you only know Cuthbert from 24, then you have no idea how talented she is as an comedian. This is one of many episodes that let Cuthbert loose to do her thing as the quirky, passionate, and easily confused Alex.

Dave's beloved food truck is stolen which launches an episode that highlights the always wonderful friendship between Dave and Penny. End your first run marathon here and then go back and watch all the other awesome episodes you skipped.

Hulu has given you a great gift, TV fans. Now go let them know how grateful you are by watching as much Happy Endings as possible.