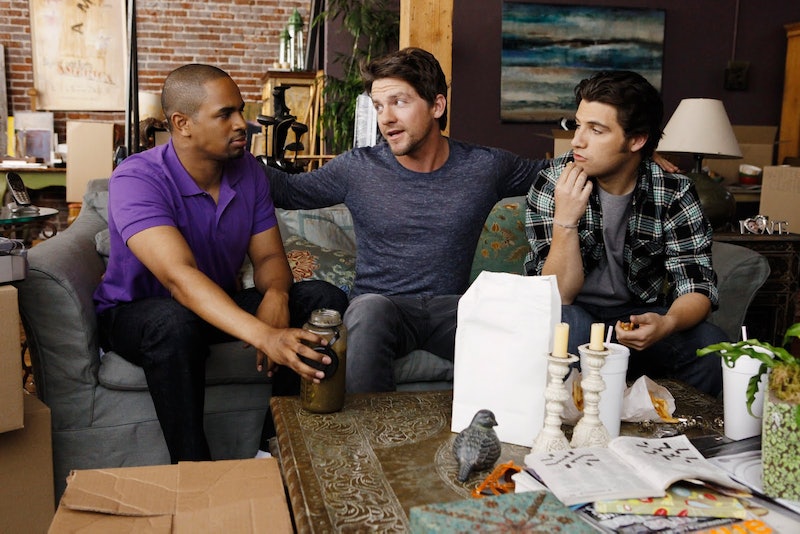 You better not be trolling us, Happy Endings writers. Ever since the official Twitter account for the Happy Endings writing staff tweeted out a cryptic countdown clock for a "new day," fans have been obsessively speculating about whether it could mean a return of the beloved, tragically cancelled ABC sitcom. That singular tweet wasn't the only reason for the chatter — since the rumors started flying, the writers have been retweeting fans who are SO FREAKING EXCITED at even the possibility of a renewal of the series. And considering that Adam Pally is leaving The Mindy Project and Damon Wayans Jr. is saying goodbye to New Girl , there's a real chance that Happy Endings could make Season 4 happen.

A renewal of Happy Endings would be everything. It's a weird little sitcom full fire-speed pop culture references and no matter how much Marry Me tries, it just can't replicate it. (Sorry, Marry Me — I love you, I just love you less.) Quite frankly, fans need — no, fans deserve — a revival. I mean, no more of Dave and Alex navigating life post-relationship? No more Brad and Jane as the ultimate power couple? No man candy for Penny? UNACCEPTABLE! There are so many things we still want from this show, and a Season 4 (I won't even be selfish and ask for a Season 5, 6, and 7, like I truly want to) could make it all happen. Here's what I want to see:

Can two exes ever really be friends? I'm not sure, but I really do think that Dave and Alex have a pretty good shot.

Don't get me wrong — Pete was a cool dude. But what would Happy Endings be without Penny discovering Tinder and dating all of the show's best guest stars? (Hey there, Ryan Hansen.)

I was happy when Peter on The Mindy Project got his life together (at least, attempted to get his life together) but I need Pally's Max to continue to sleep on a pile of pizza boxes and use GrubHub as a hookup app in order to be fully content with Season 4 of Happy Endings. Don't do anything crazy like have Max go get a job.

Can Sinbrad be the seventh member of the gang, please? There has to be a way to squeeze one more person into their booth...

You can almost imagine what Jane was like in high school — the Ivy League-aspiring know-it-all with a burning temper hidden behind her J. Crew sweaters. I want more of Jane screaming at Homeowner's Association meetings and also more of Jane returning to infancy with the when faced with disapproval from her big sister Brooke. I want the whole spectrum of Jane, really.

Who doesn't want to hang out with a gang that spends just as much time ragging on one another as they do having one another's backs? Which is exactly the place that the Happy Endings writers will have stuck their knife if this Season 4 thing ends up being a total joke. You've been warned, kids.