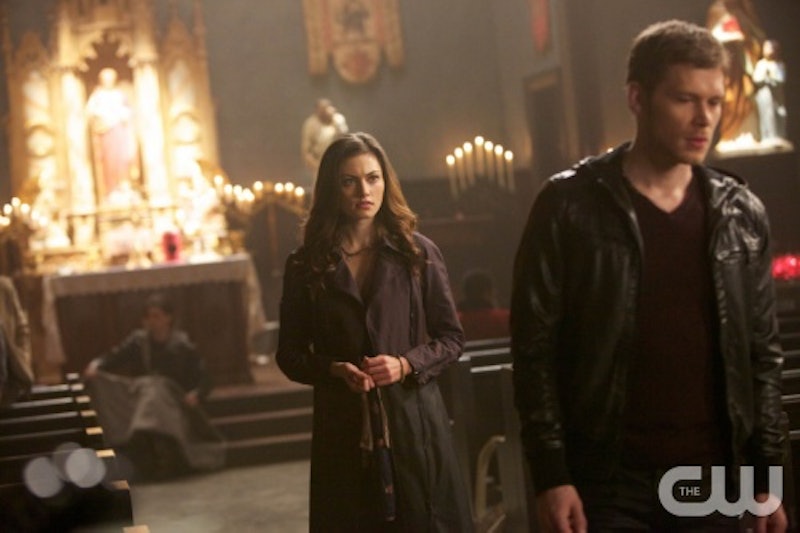 As if the poisoning of Timothy wasn't brutal enough, The Originals killed off yet another character this week. Who? I'll get there, I'll get there. I'm still grieving. Let me deal with my feelings. Let me work out what happened during the episode. Please be patient. I'm fragile right now.

Hayley tells Elijah there’s something he needs to know. What’s that something? Ah, right. The “Hayley gave the witches information about Celeste” something. But before she can spill the dirt, the vampire courtyard begins shaking and spazzing and earthquaking. Why? Because Davina’s entire being is self-destructing. Yup.

Witch-quakes can't stop Hayley though, because she picks up where she left off and tells Elijah about Celeste. Elijah is like, “You broke my trust.” He’s NOT HAPPY.

Back at Witch HQ: Sophie and Sabine are like, “Let’s dig up these Celeste bones.” Elijah crashes the party and is like, “You stole the remains from the very person Davina’s been getting her power from. You're messing everything up. LEAVE CELESTE ALONE. I LOVE HER.” Sophie is like, “I didn’t know!” And then everyone else shows up and is like, “By the way, witches, Davina is vomiting dirt and causing earthquakes.” Sophie is like, “THIS ISN’T GOOD. THIS ISN’T GOOD. THIS ISN’T GOOD. THE POWER IS DESTROYING DAVINA AND IT’LL DESTROY US, TOO. WE NEED TO COMPLETE THE HARVEST, STAT. THIS IMPACTS VAMPIRES, TOO.”

Davina's self-destruction will have four stages: earthquakes, then rain, then wind, and the last (and worst) will be fire. Rebekah visits Davina and tells her that they need to complete The Harvest before she self-destructs. Davina is like, “No, thanks.” Rebekah is like, “You’ll be resurrected!” and administers a sedative. Davina falls asleep and the ongoing violent winds (stage two!) cease.

After sedating Davina, Rebekah swings by Sophie’s. She’s like, “Hey, are you really ready to do this Harvest thing? You’re aware that you’re going to have a slit Davina’s throat, yes?” And Sophie is like, “YEAH I KNOW GOSH STOP NAGGING ME I JUST WANT MY NIECE BACK.” And then Rebekah is like, “Yikes, okay. Also, you know that when this is all said and done, Klaus and Marcel will be back to fighting each other again? So let’s team up.” Sophie is like, “Uh… what?” And Rebekah’s like, “I don’t necessarily like you, but I want to fight those two knuckleheads alongside you.”

Marcel Tries to Save Davina

Later, Klaus and Rebekah call Elijah with some stressful news: Marcel has run off with Davina. The witches try to do a Locator Spell, but it won't work on the self-destructing Davina.

Marcel takes Davina to the docks. "All I want to do is keep you alive, I swear,” he says, and then assures her that he won’t let the witches hurt her. AWWW, MARCEL!

Elijah, Klaus, and Rebekah discuss letting the witches use their dead mom's witch power to complete The Harvest. Rebekah is like, “NOT INTO IT, SHE'S TOO POWERFUL... UGH, fine. I guess I’ll deal.” Suddenly, there’s an intense rainstorm. It’s the third stage of the self-destruction. Rebekah gets an idea.

THIERRY TIME. Rebekah visits Thierry (Marcel’s ex-BFF) in the torture garden and asks him where Marcel might be hiding. Thierry tells her. Nice work, Rebekah! She goes to the docks. Rebekah talks to Marcel and Davina. She more or less says, “You're spewing up water, Davina. That ain't right.”

Sophie Takes a stab at the Harvest

Rebekah meets up with her brothers, the witches, Hayley, and Uncle Priest in the graveyard. They're all standing around a coffin. She tells them that Marcel will bring Davina. The start cutting their hands with a dagger. Gross. Uncle Priest throws the bloody dagger on top of a coffin and is like, “IT IS DONE.” I’ll take his word for it.

Back at the docks, Davina tells Marcel that she’s scared that she’s going to die soon, but that she’s ready. She also is like, “I’ve had some great friends, including you.” IT’S VERY SAD.

Marcel brings Davina to the graveyard. It’s still raining, but Davina sets the place on fire. Ugh, Davina! So sickening. Oh, wait. The fire is the fourth stage of self-destruction. I forgot. Not-so-sickening. Sophie sticks the dagger in a flame and then slits Davina’s throat. DAAAVIIIIINAAAAAA, NOOOOOOOOO!!!

Marcel breaks down over the death of Davina. Klaus embraces him and says, “I’m sorry. You may think I know nothing of your grief, you are wrong.” And then tells him about how upset he was back in the day when he thought Marcel was dead. They hug some more. Hey, Klaus? Let me know when you’re tired of hugging Marcel. I’ll gladly step in at any time.

Hayley tells Elijah she was wrong to go through his journals and give Sophie the Celeste scoop, but Elijah is like, “Meh, you don’t get it. I love Celeste.” Hayley says, “I won’t choose the dead over the living, so why are you?” She apologizes, walks away, and then ELIJAH GRABS HER AND… they almost smooch. AUGHHHHHHHHHH.

Where did all of the witch power go?

Rebekah and Klaus chat about the bummer of a day they've had. Rebekah asks the question I’ve been wondering for the past 10 minutes: “Where did all of that power go?”

We then see Sabine doing magic and reciting an incantation and “If I Had a Heart” by Fever Ray is playing and it’s very creepy/amazing. She summons a group of old timey-looking witches (?). They’re like “What’s up, Sabine?” And Sabine is like, “UH DON’T CALL ME THAT. CALL ME BY MY REAL NAME… ” No, no, no, she can’t be— “CELESTE.” AHHHHHHHHHH!!!!!!!