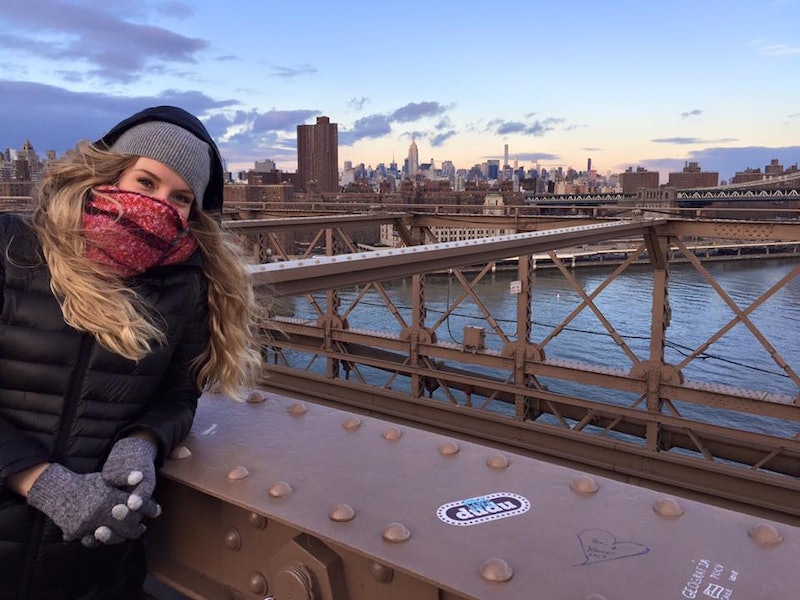 When I was 17, my parents gave me and my sister purity rings. My older brother never got one.

I remember the night I wore my purity ring for the first time. My dad took me out for pizza and told me all about the meaning of the ring he and my mom had picked out for me. I remember thinking it was odd that my mom didn't join us, that it was freezing outside, and that I was more than a little uncomfortable about the whole outing. After all, we were essentially discussing the state of my hymen and the future "Godly husband" I wasn't even sure I wanted. I knew my parents were doing it because they felt responsible for protecting me from the potential heartache that misplaced trust, sex, and relationships can bring. So I listened to what my dad had to say, and I nodded respectfully at the appropriate times.

The ring was a shiny, yellow gold band with three cubic zirconium stones resting on it's peak. It was so small and pretty, and I actually really liked it — but even as I slid it onto my finger for the first time, I knew that it was never going to keep me from having sex before marriage, and more importantly, I knew that I didn’t want it to.

Although I was still a practicing Christian at age 17, my faith was already transforming into something very different from my parents'. I had been mentally questioning the teachings of the Christian church for about a year. My catalyst had been recognizing all the ways the doctrine I had been living by for my entire life alienated and condemned my queer friends and coworkers. And, perhaps subconsciously, I started to realize that my own sexuality was more fluid than I had thought it was.

the thought of having sex before I was old enough to drive or even wear a real bra didn’t occur to me. I suppose my youth pastors assumed I felt differently.

I could no longer reconcile the church's anti-gay behavior with Christ's teachings of unconditional love, and that meant I could no longer fully support the church's restrictions on sexuality or its insistence on sexual abstinence. The older I got, the less compelled I felt by man-made Christian dogma in general, and the doctrine that sex is a sacred act in particular. Even at 17, when I was still actively attending church, I found the idea of legally and spiritually binding myself to another person before making sure they were a sexually compatible partner immensely disconcerting. And boring.

Of course, as a girl who grew up religious as hell, I started hearing about purity rings long before I’d ever really started thinking about sex. But as a sexual late bloomer, the thought of having sex before I was old enough to drive or even wear a real bra didn’t occur to me. I suppose my youth pastors assumed I felt differently.

I was 12 years old when the various youth groups I attended started pushing their “true love waits” campaign. Even back then, when I was arguably at my most religious, I felt confused by what I now realize was essentially a combination of the church's slut shaming of children and our society’s placement of sexual responsibility on pre-teen, female shoulders.

Despite my pubescent qualms with "true love waits, "I pledged to the church and my parents to "save myself" for marriage anyway. The thought that I didn't have to promise just because my religious leaders had asked me to didn't even register as an option until I was well into my teens.

For four years after my parents gave me my purity ring, I stayed a virgin while my friends made first-time memories with their first loves. I was a virgin, but I no longer considered sex before marriage sinful. In fact, by 18 years old, I had stopped believing in the church's definition of sin altogether; it seemed to me that it was far too subjective and circumstantial for me to live by. I couldn't accept the teaching that good, consensual sex between two people who loved each other was either sinful or sacred, depending on a piece of paper and ceremony.

I remember my best friend texting me one day during summer vacation saying, "I did what you're not supposed to do until you're married." Shortly after he became sexually active, I remember my closest guy friend telling me with a smile, "Liz, sex is literally the best feeling in the world." I remember my older sister calling me while I was running in the park, panicked, to ask if I could pick her up a pregnancy test. I remember making her tell me her first-time story after the test came back negative, and I remember her ending that story with, "at least we're engaged." It seemed as though I was the last virgin on Earth. I started to feel like I was missing out.

My delayed sexual awakening wasn't the fault of my purity ring. It just worked out that way. The truth is, I didn't even have my first real kiss until I was 17, and although I knew that I didn't want my first time to be on my wedding night, I also knew that I wanted it to be with someone who I cared a lot about. When I wore the dainty circle on my ring finger, I did so primarily because I appreciated its beauty, not as a reminder to stay chaste.

There was also a small part of me that felt obligated to wear the ring simply because my parents had put thought and money into gifting me it. But the longer I wore my purity ring without actually believing in its intended purpose, the less I felt like I could continue to wear it solely based on its beauty and my own feelings of familial obligation. Over time, I wore it less and less.

When I moved away from home at 20 to transfer to a state university a few towns over, I was beyond ready to have sex, and I had long since abandoned the concept that premarital sex warrants shame. I stopped wearing the ring altogether.

Ironically enough, I met the guy who would be "my first" shortly after I stopped wearing my purity ring. We took two of the same literature classes, and we ended up dating for nearly four years. I remember meeting him and realizing that I'd never felt so physically attracted to another person in my life, but I managed to talk to him anyway.

“I knew I wanted to have sex with you the first time I saw you,” I told him almost a year later, as we sat cross-legged on the floor of my apartment, high and giggly. A few days later, I asked him to be my first. I still grin when I think about it.

I don't remember losing my purity ring, but I do remember the day I realized it was lost. It was springtime, and I was busily tidying up my apartment when I noticed the ring was missing from all of my various jewelry boxes. My virginity was long gone at this point, and I couldn't help but laugh about the fact that my purity ring had seemingly disappeared right along with my "purity."

Not only was I fine with discovering the ring I hadn't worn for months was lost, I think I was relieved. I'd never really wanted or needed it. My purity ring's total absence was one less reminder of the ever-present guilt I felt growing up, and it was also one less reminder of all the ways I'd undoubtedly disappointed my accepting, loving, but still very honest Christian parents by openly forsaking my devoutly religious upbringing.

I still wonder what happened to my purity ring, but I've never felt sad about losing it.