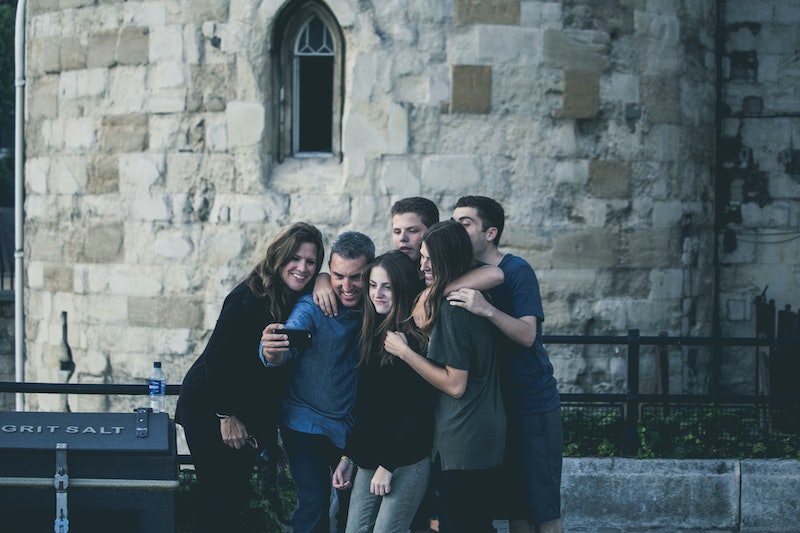 If you're anything like me, then your views on politics, sexuality, religion, and recreational marijuana use probably don't match up perfectly with your parents' — and that's anything but easy. At the same time, contrary to popular belief, it is possible to have a healthy relationship with your parents even if you don't share their morals. Learning how to get along with your parents when you disagree with their ideologies can be really challenging, but if you want to continue to have a meaningful, adult relationship with them, it is also necessary.

With the winter holidays fast approaching, grown children everywhere are undoubtedly bracing themselves for the typical awkwardness of the multiple family dinners they're about to endure — and I totally understand that. If you feel like you can't discuss the topics that matter the most to you without offending one or both of your parents, it can make you not to want to talk to them at all. However, over the years, I've found that it is possible to talk to your parents about your beliefs without those conversations turning into fights.

Obviously, every parent-child relationship is different, and some parents are going to be more intolerant than others — but if you give them a chance, you just might be surprised by how accepting your parents can be. Here are seven tips on how to get along with your parents, even if you don't share their ideologies.

Walking on Eggshells: Navigating the Delicate Relationship Between Adult Children and Parents, $11, Amazon

Trust me, I know how scary being honest with your parents can be. When I told my extremely Christian, former-preacher, elder, and deacon father that my (now ex) boyfriend was going to move in with me a few years ago, I was literally shaking. But guess what? He didn't tell me he was ashamed of me, or that I was destined for hell-fire — instead, he told me that he respected me for not hiding my decision from him, and that he could love and accept me without loving my choices.

A few months ago, I admitted to my mother that I consider myself agnostic. Rather than trying to convert me, she advised me to find a place where I could fellowship with other agnostics once I moved to New York.

Like I said above, your parents may be different than mine — but there was a time when I never would have expected my parents to be so accepting and tolerant of my heathen ways, and they just keep surprising me. So, try being honest with your parents. They may not be as understanding as they should be, but what if they are? Give them a chance to surprise you.

Do I love listening to my parents argue against reproductive rights, gay marriage, and the legalization of recreational marijuana? Of course not — but if I want them to be tolerant, accepting, and non-judgmental of my ideologies, then I have to show them that same courtesy.

In my experience, the only way you can have an open, honest relationship with your parents is if you encourage them to be as honest with you as you are with them. Listen to what your parents have to say, and don't punish them for their honesty by being judgmental of their beliefs.

3. Make It Clear That You're Not Trying To Change Their Minds

As much as you may want to change your parents' minds about certain topics, trying to convert anyone is usually really uncool. Everyone is entitled to their opinions, and you don't have to personally understand your parents' beliefs for them to be valid. So when you're discussing the heavy topics like politics and religion with your folks, make it clear to them that you're not trying to talk them into (or out of) anything.

Tell them why you feel the way you do, and answer any follow-up questions they may have for you, but try not to argue with them when they disagree. It's not your responsibility to change their minds, and it probably won't work anyway.

4. Ask Them To Be Respectful Of Your Beliefs

It's OK to ask your parents to be respectful of your beliefs. In fact, it's more than OK — it's really important, because otherwise they'll probably never stop trying to change your mind. Your parents have most likely felt responsible for morally shaping you since before you were born, (I know mine have) so seeing how you've rejected many of the values they tried so hard to instill in you might make them feel like they've "failed" you.

When you make it clear to your parents that they're not responsible for your opinions, and that they aren't capable of changing them anyway, you take a lot of pressure off of both them and their relationship with you.

I've asked my parents to be respectful of my beliefs, and it's made our conversations way less stressful. Of course, they still tell me why they disagree with my opinions, (as they should) but I no longer feel like they're on a mission to change my mind — and it's allowed us to be way more open with each other.

5. Accept That There May Be Certain Topics You Want To Avoid For Now

My parents continue to surprise me with their acceptance, but part of maintaining a healthy relationship with anyone is respecting their boundaries. Personally, I don't think my dad's ready to hear me talk about how I'm attracted to both men and women, and that's fine. Since I've never dated a woman, it's an issue I've never really had to discuss with him. That said, I strive to live honestly, so I'm not going to lie to him about my sexuality if he ever asks me about it.

If you're nervous about approaching certain topics with your family, know that it's OK to avoid them for now. It's your choice how much you want to reveal to them. That said, I'd recommend trying not to be purposely dishonest about those topics if they're brought up, since that violates Rule #1, and doesn't tend to do anyone any favors in the long-run.

Even if you think your parents are super wrong about something, don't use this phrase. It's incredibly judgmental and absolute. Plus, you would probably hate to hear them say the same thing to you.

I mean, it's fine to tell your parents when you disagree with them, but wording is key — so don't tell them they're wrong. Instead, say, "I really disagree, and here's why".

7. Acknowledge The Fact That Your Opinions Could Change Over Time

Honestly, I think I'll probably always be the liberal, feminist, pot-smoking, beer-drinking, sex-loving heathen that I am today — but people do change, and I think it's important to recognize that. My parents are different now than they were at my age, and yours probably are, too. So claiming that age and life experience won't even remotely change our beliefs is kind of arrogant, and it's most likely incorrect. They'll appreciate the humility — and perhaps even leave themselves the same room to evolve.