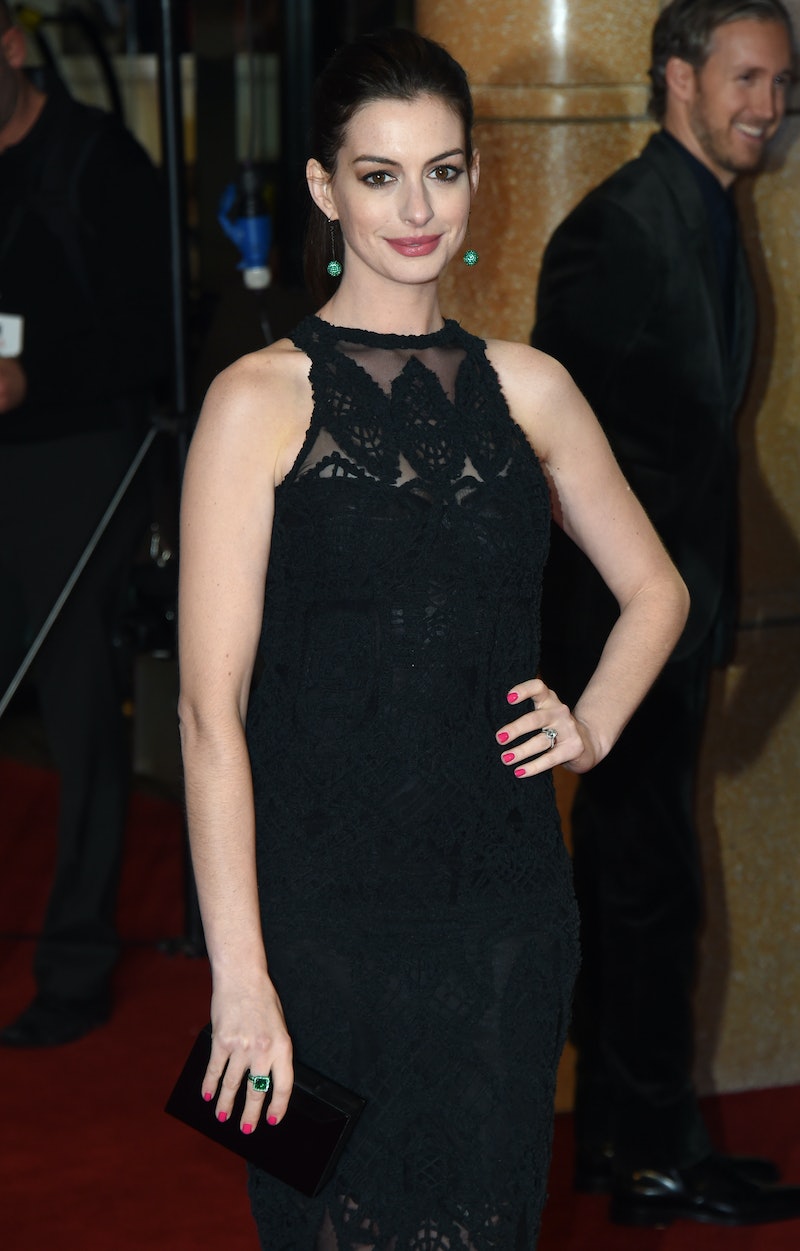 It's a super exciting time for Anne Hathaway right now, and she's going to share her experiences with us — but only as she sees fit. Ever since the news of Hathaway expecting her first baby broke, I've been wondering if the normally private celeb would talk about her pregnancy in public. My guess? No, and I was right, but there's only one problem: The paparazzi have obviously been clamoring for a shot of her baby bump, but once again, she didn't let them win. On Monday, Hathaway debuted her bikini-clad bump in an effort to beat the pesky photographers to the punch, and it was her way of taking the power back to control her own story. How awesome is that?! It gets even more awesome when you realize this is hardly the first time she's made a play like this.

Over the course of her career, Hathaway has seen it all — she's been America's sweetheart, she's been hated for absolutely no reason, and she's even taken a little time for herself to disappear from the spotlight. And no matter what curveballs Hollywood has thrown her way, she has never let it change who she is or what she stands for.

Here are just a few times Hathaway has taken control of her own narrative. How is it possible that there are people in this world who don't absolutely adore this woman?

1. When She Disappeared Off The Radar

Remember that horrible period of time when you couldn't use the Internet without seeing someone complain about Anne Hathaway? I'm glad that's over now, but she took it as a cue to disappear from Hollywood for awhile, telling Huffington Post, "My impression is that people needed a break from me." Not that she should have to do that, of course, but I love the fact that she decided to take a break and stop giving the media fuel to use against her.

2. When She Schooled Matt Lauer On Asking Appropriate Interview Questions

While visiting Today to promote Les Mis in late 2012, Matt Lauer asked her about her wardrobe malfunction and the "lesson learned" from it. There was so much to be angry about in his question that I have no idea how Hathaway pulled it off as gracefully as she did, but she managed to make a statement about how sad it is that the world capitalizes off of a woman in a "vulnerable moment" and direct the conversation back to the movie, without even batting an eye. Hathaway, teach me your ways!

3. And When She Refused To Answer Questions About Her Weight Loss

Not only did Hathaway shut down too much Lea Salonga chat toward the end of the interview, but when Ricky Lo asked her how she lost the weight to play Fantine — and, even worse, how she gained it back — she refused to answer the question. Just "I'd rather not talk about the weight loss." And that's all it takes!

4. And When She Did It Again — So Gracefully

This time, Hathaway had a better repertoire with the interviewer, so it was a little less awkward to watch, but she did drive home the point how offensive it is to ask anyone about their weight. A+.

5. When She Reportedly Left Dog Poop On A Paparazzi's Car

This is a thing that may have happened when Hathaway realized she was being followed while she was walking her dog. Sketchy behavior for anyone to deal with, but especially when you're alone. Don't take unsolicited photos of Hathaway. You will pay, and it will be disgusting.

6. When She Decided Not To Change Who She Is To Please Others

In an interview with In Style earlier this year, Hathaway admitted that she once wanted to fit what she thought the media wanted her to be, but eventually realized that wasn't the way she should live her life. She said:

And it's definitely paid off, because her real self did all these awesome things in this list.

7. When She Turned A Nightmare Relationship Ending Into A Joke

In 2008, Hathaway's longtime boyfriend Rafael Folleri was found guilty and sentenced for money laundering charges. Awkward to face the public after being associated with someone like that? For some. But when David Letterman asked her about the whole thing, she quipped, "As far as relationships crashing and burning goes, come on. I did pretty great. I mean, scorched that earth! I'm an all or nothing sort of girl." In doing this, she took charge of this story. Making fun of yourself can be a very powerful thing, and she definitely made the best out of a bad situation.

I can definitely understand where, in a lot of these situations, Hathaway would feel powerless to change the way she was perceived. Instead, she refused to leave the driver's seat in her own life, and now, she's doing that with her pregnancy, too. Her future kid is lucky to have a mom like her to learn from!