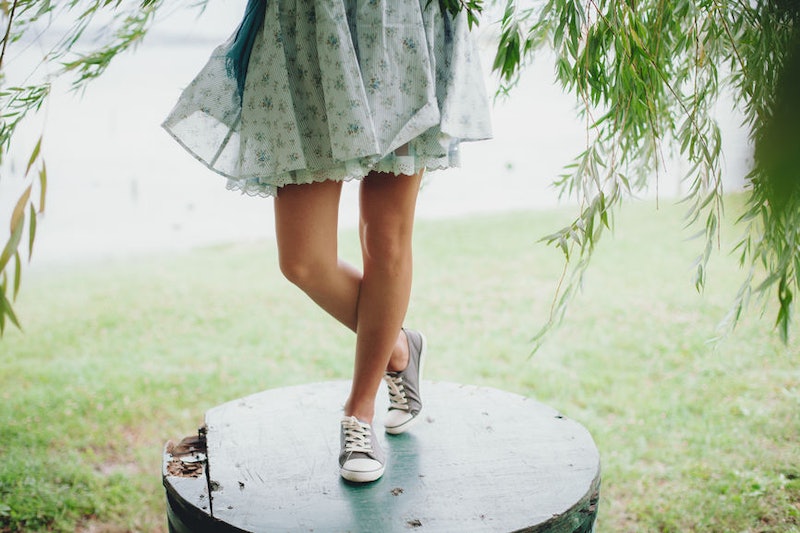 I'm a perpetually clumsy person. Spilling my coffee all over my electronic devices and having no spacial awareness when it comes to navigating my bottom around are only two of the consequences of this. So my decision to stop wearing heels was less about stilettos being a "fetishistic tool of patriarchy," and more about the desire to lessen my chances of tripping on the one faulty subway grate in New York City and meeting my doom 20 feet below. Paranoia? Perhaps. But totally not impossible.

I was never a religious heel-wearer, per se. Taking after my father in the height department, my 5'10" self never much felt the need to be even taller. But as a self-conscious, early college student seeking ways of tricking the public into thinking I was less fat than I was, I began dabbling into the genre of shoe that promised to elongate my legs and shrink my ass.

Somewhere along the way, I segued into the world of body positivism and actually learned to love my body as it was. That meant I could start wearing things I liked just because I liked them, and not because of their mythical slimming properties. But I always kept heels in my closet nontheless, at the ready for blog photo shoots and friendly gatherings. Maybe I was still holding onto internalized fat shaming. Maybe I just developed an appreciation for pretty shoes. Either way, it only lasted until Halloween 2014, when I dressed up in an Ursula costume — four-inch patent heels on foot — and cartwheel-fell down the steepest flight of stairs I'd ever come across. A couple of aching bodily bruises the size of my head later, and I didn't have much of a desire to put on heels anymore. In the time since giving them up, here are some things that have happened to me.

Women and feminine people are often bombarded with a heap of rules regarding proper clothing etiquette, and wearing fancy schmancy shoes with dresses is one of those guidelines. I remember preparing for my Quinceañera, wanting nothing more than to wear my beaten-up Converse with my purple tulle gown. I wasn't allowed to do that, but I couldn't help but question why.

IMO, semi formal and flat-out formal-wear can be paired with anything of your choosing. If anything, the juxtaposition of styles is striking — more memorable, perhaps, then yet another nice dress with yet another pair of nice heels.

In the summer of 2015, the International Journal Of Clinical Practice conducted a study that found, "Collegiate women who wore shoes with four-inch high heels more than three times per week to their classes developed an imbalance of four functional ankle muscles." At first, "Wearing high-heeled shoes appeared to strengthen ankle muscles, [but] prolonged use eventually caused an imbalance, which is a crucial predictor of ankle injury."

I can't speak for anyone else, but no matter how well-fitting or "comfortable" the heels I'm wearing seem, my feet — and especially my ankles — will be destroyed by day's end. I know a lot of folks, including friends of mine, believe in suffering for their sartorial and aesthetic choices. But that's just not me. If I'm not comfortable, I become something of a cranky asshole. The discomfort and poor mood are, quite frankly, things I'd prefer to avoid.

3. I Discovered The Chunky Platform

The chunky platform is, in my most humble opinion, the most underrated type of footwear the world over. If height is what you desire, but you're not particularly keen on wearing ankle-bending stilettos (or, like me, you're just clumsy AF), the platform can be quite the day-saver. From creepers to platform sandals to stylish combat boots, platforms truly come in all stylistic genres under the sun. Personally, I find them to be comfortable and not at all woe-inducing.

4. I Started Tripping Over (Slightly) Less

Since that horrid Halloween, I'm happy to report that there have been no major falling episodes on my end. Yes, I still trip over myself frequently (like I said, I have never had much sense of spacial awareness), but true disasters have been averted.

When you're a particularly clumsy person, I think it's crucial to take heed of the things that make you even clumsier. The simple reality is that walking in heels is hard. But add to that an inherent inability to stand sturdy and you're basically just asking to face-plant.

5. I Remembered How Silly "Slimming" Tips Actually Are

If I can be blunt here, let me just tell you something: No shoe or dress or style will ever trick the world into thinking your body looks different than it actually does. Whether you try to "elongate" your legs to make your toosh appear thinner or not, your body is your body — and others humans around you will likely know that.

If you really just love wearing heels, please don't let me deter you from being your badass stilettoed self. But if you're only wearing them because you're trying to follow the so-called rules of society that tell you aspiring to look as slender as possible should be your main goal when executing all decisions, please... just stop. You don't have to follow any rules that you haven't set for yourself.

6. I Learned A Lot Of Weird Things About Feet

This might just be me, but since ditching my three-inch death traps, I've become fascinated by footwear trends throughout history. Mainly because I really want to be able to answer the, "Why do we do these things to ourselves?" question as some point in my life. I don't know that such a thing is actually possible, but it turns out that we've been doing weird shit to our feet for a long time.

Ever heard of foot binding? As Raffy Marie Parker reported on Bustle, "Thought to have originated in Imperial China among upperclass court dancers in the 10th and 11th centuries, foot binding eventually spread to all classes, and was seen as a method of displaying status. The resulting wobbly, doll-like walk suggested the person was too wealthy and valuable to undertake manual work." Ignoring for a moment how weird the phrase "doll-like walk" actually is, let's focus on the fact that folding people's toes in and tying them together can result in permanently crippled feet. The things we do for... what, exactly?

7. I Thought More About Heels' Relationship To Patriarchy

High heels are one of these subjects that can very quickly spark debate in feminist circles. On the one hand, they likely came to be because of their supposedly slimming properties that equate to longer legs and smaller asses (something certain dudes have been known to be drawn to). On the other, shouldn't it be a woman's choice whether or not to wear them, regardless of their origin?

I personally think a strident "yes" is in order when it comes to that question, but I don't think we can ignore the fact that a lot of these standards of beauty might tie into appeasing the male gaze for some folks. For me, separating the trends and styles that genuinely give me joy versus the ones that I think I have to wear to fit someone else's standard has been crucial in my journey to body positivity.

8. I Also Learned That Some People Just Really Like Them

So, yeah. Maybe patriarchy does factor into the existence of heels, and some people's use of them. But I'm also willing to bet that a hell of a lot of people just love 'em. Heels don't have to be about appealing to men or striving to look thin or anything you don't want them to be. They can, and arguably should, just be a shoe. Regardless of their history, we should all be able to exercise autonomy over our stylistic choices. If heels make you feel your best, there's no reason not to wear them.

9. I Was Reminded That No One Can Dictate What You Should Or Shouldn't Wear

I chose to stop wearing heels not as a feminist statement, to further my political agenda, or to somehow prove I'm more comfortable in my body than anyone who wears stilettos. I simply chose to stop wearing them because they weren't practical for me. Not only did they amp up the possibilities of my falling face-first down steep stairs, but I just didn't find them comfortable. Maybe it's because of my fat feet. Maybe it's because of my clumsiness. I really can't say. But wearing them made me feel, well, not like myself. And if there's one fashion rule I live by, it's to dress for yourself — and no one else.

So no: People who don't wear heels aren't somehow superior to those who do. It just comes down to personal choice. And my personal choice is to live nestled in Dr. Marten boots and Oxford flats, feeling free to jog (or not jog) happily over to the ice cream stand, never having to worry that my heel will cause my ankle to twist and ruin my chances of blissful dessert.

Want more shoe tips? Check out the video below, and be sure to subscribe to Bustle’s YouTube page for more hacks and tricks!