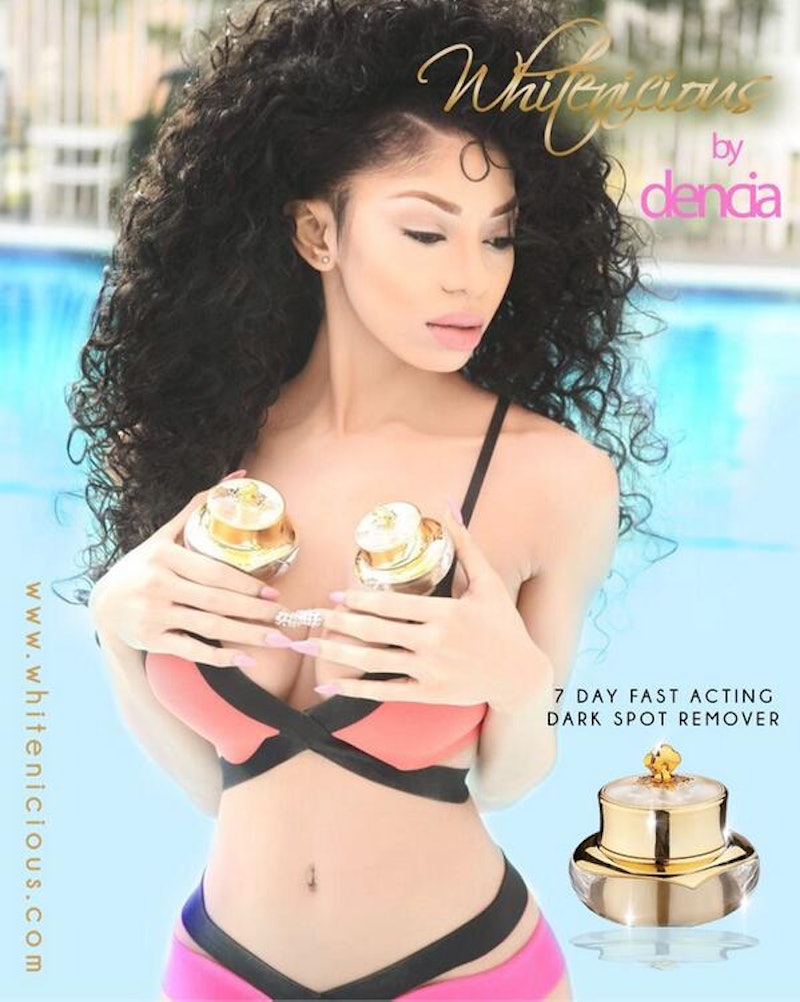 Sometimes, the cosmetics industry takes things too far. Recently, Nigerian pop singer Dencia has come under fire for the release of Whitenicious, a skin care line that claims to "help users rid themselves of pesky dark spots by gradually lightening the hyper-pigmented areas of their skin," according to XO Jane. Skin-toning, the friendly term for skin-lightening, is a common practice in Nigeria.

According to the Whitenicious website, the line contains no harsh bleaching chemicals and is chock full of skin-healthy Vitamins C and E. The site makes no mention of common skin-lightening practices and focuses its claims on treating hyperpigmentation. So far, the brand has released two products: Whitenicious for Dark Spot Remover and Whitenicious for Dark Knees, Knuckles, and Elbows, priced between $50 and $150. Both were sold out within days of the launch.

Although the claims seem harmless and are in line with the same claims that we see Western cosmetic companies making daily, the name and advertisements point to something more troubling. Before-and-after photos have surfaced, showing dramatic results. Dencia herself seems to have undergone a huge transformation. Her skin, previously quite dark, is depicted as milky white in all promotional photos for Whitenicious.

Either Whitenicious is more harsh than advertised, or Dencia has undergone far more drastic treatment, such as bleaching. Bleaching and other skin-lightening treatments are widely used in Dencia's home country of Nigeria. According to a report by the World Health Organization, the high level of mercury in skin-lightening products can lead to permanent kidney damage.

Nigeria has the highest usage of skin-lightening products in the world. According to a report by Al Jazeera, lighteners are not effectively regulated in Nigeria and are therefore widely available. Women bleach their skin for a variety of reasons, including a desire to adhere to Western beauty ideals and to increase marriageability. In many parts of Africa, lighter skin is highly idealized.

But skin lighteners have dangerous consequences for the body and the mind. Whether Whitenicious can be counted among the toxic products that are harmful for a woman's health is somewhat beside the point. Dencia is sending the wrong message here. Instead of embracing her dark skin and teaching fans to do the same, she has named this product Whitenicious, a word that likens whiter skin with "lusciousness," and showcases herself boasting significantly lightened skin in the product advertisements.

Whether the images have been digitally or chemically enhanced is no matter, Dencia is promoting a harmful practice that isn't empowering.

More like this
Charlotte Tilbury Just Launched A Royal Collection To Mark The Queen’s Platinum Jubilee
By Tomi Otekunrin
What To Know About Brow Microshading Vs. Microblading
By Danielle Sinay
21 AAPI-Owned Beauty Brands That Will Be Your New Favorites
By Audrey Noble
Meghan Markle’s Favourite Skincare Brand Has Finally Landed In The UK
By Tomi Otekunrin
Get Even More From Bustle — Sign Up For The Newsletter