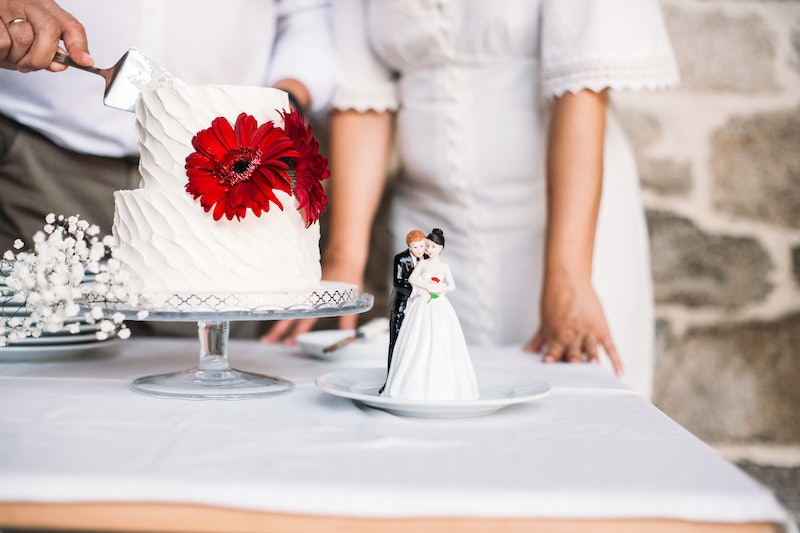 When I was growing up, I never imagined I'd end up a married person; frankly, I thought that by now, I'd either have died a tragically beautiful, Fantine-from-Les-Mis-type death, or be a millionaire due to inventing some kind of spreadable chocolate. But life doesn't always go the way you plan — as it turns out, someone else had already invented Nutella, and at 33, I am alive and on the verge of making it legal with my long-time boyfriend. Our decision to get married was hardly sentimental — after years of unwedded bliss, we became concerned about not having the legal right to make end-of-life decisions for each other. I know, it's basically The Notebook, aren't you jealous? But it's what we wanted — which is probably why the only marital tradition that I'm 100 percent behind is getting a prenup.

Not because I think we'll break up, mind you, or because I want to make sure my man can't get his hands on my Kardashian-adjacent Malibu mansion if things ever go south for us. I can't imagine life without my boyfriend, and we probably collectively have just enough money right now to make a down payment on a plate of taquitos. But in spite of all this, a prenup — a legal document, signed before marriage, that outlines the allocation of property and other financial assets in a divorce — is important to me. In our relationship, our prenup symbolizes the fact that our independence is ensured, no matter what happens in the future. That's why, for me, getting a prenup is a feminist act.

Read on to find out why, and prepare to never hear Kanye West's "Gold Digger" the same way again.

1. It's Sexist To Think That Prenups Are Inherently Sexist

The idea that prenups are sexist and exist primarily to financially hurt women is baked pretty deeply into our culture — think of Donald Trump's ever-so-classy advice on the matter in his book The Art of the Comeback (in which he claims there are "three types of women and reactions" when it comes to prenups — women who refuse to sign because they're insulted, women who refuse to sign because they're calculating, and women who sign because they are "gold-diggers" who plan to leave the marriage soon). Or consider the episode of Seinfeld where George tries to end his engagement by asking his fiancée to sign a prenup, assuming that she'll be so offended by the request, she'll leave him.

Very few of us would openly admit to taking marital advice from Donald Trump or George Costanza. But when we dismiss all prenups as inherently predatory to women, we're saying that they're right: that prenups only protect men, and that women should be insulted because of this.

This line of thinking hinges on the idea that most marriages consist of a working husband and a non-working wife who has no financial assets of her own — a concept that hasn't matched up with actual lived American life for a long time now. According to PBS, the number of married women who work outside the home has been on the rise since 1920, and according to the National Bureau of Economic Research, 60 percent of women were in the work force as of 1999 — a number that includes a vast number of married women.

Add to that the fact that marriages are no longer about one man and one woman, and the fact that, since the average American woman now marries at 26.5, we're more likely to have amassed assets as single people — and you can see how our thinking on prenups often seems to bear little relation to how we actually live our married lives now.

As screenwriter Karen McCullough noted in a personal essay in Cosmopolitan, she pays spousal support to her ex-husband, even though they have no children, simply because her state laws require that of the spouse who makes more money. Though the oft-quoted statistic that women only make 79 percent of what their male peers make is true, it's working with averages — individual women may still make more than their male partners. And many state divorce laws, like those of California, are aimed at helping whichever spouse has the greatest financial need — though we may often think of that partner as being female, in reality, the way post-divorce finances are distributed has nothing to do with gender. Which means that protecting your finances has nothing to do with gender, either.

3. A Prenup Ensures That Both Parties Are Free To End The Marriage

If you Google "prenup + feminism," you're more likely to find unhinged rants about how feminism is an evil cult that encourages women to refuse prenups and then eat your dick with some melba toast, rather than feminist defenses of the premarital contract. But for me, a prenup means that I am less likely to get stuck in a marriage that no longer works due to financial concerns — which absolutely makes it a feminist asset.

The idea that prenups are predatory and exist only to protect men's finances goes hand-in-hand with the stereotype that marriages end because a man has decided to "dump" his wife over something trivial. This disregards the fact that plenty of people, of all genders, become stuck in bad marriages because they're financially unable to leave.

Prenups can't fix this entirely, of course — it's still very tough for many, many people in this country (especially women) to make a living wage on their own — but they can provide one more way to keep yourself from ever getting trapped in a bad situation. With a prenup that makes both partners happy, no one will fear being bankrupted by spousal support or being stuck with zero financial resources if things end — and thus, there's less motivation to stay trapped in a bad marriage.

4. There's Nothing Empowering About A Divorce Court Battle

I think much of the public perceptions of prenups as things that works against women's interests are colored more by things like The First Wives Club or the many public divorce battles of the Real Housewives than they are by real life. Our ideas about prenups are molded by screaming tabloid headlines about which celebrity couples do and don't have prenups, where that information is treated as salaciously as whether or not someone is banging the nanny.

But in real life, divorces generally aren't operatic games of vengeance with millions of dollars and a chalet in Gstaad on the line; more often, they're sad, pedestrian legal proceedings to determine which member of a former couple gets to keep the house or the car or the cats. An empowerment montage set to "Sisters Are Doing It For Themselves" is rarely in danger of breaking out at divorce court.

Divorce battles can get incredibly costly — often leaving one or both parties broke. According to Legal Zoom, "the average cost of a contested divorce [ranges] from $15,000 to $30,000. Most of this money is spent on legal fees."

There’s no question that prenuptial negotiations can be difficult emotionally. But the pain caused by an ugly divorce where the parties are fighting about asset values and distribution, as well as alimony, is much more corrosive, especially when children are involved. Better to endure some discomfort early on than years of fighting down the road.

Minimizing your potential time and money spent battling it out with an ex in divorce court sounds, for me personally, like the more empowering option.

5. It Puts The Power In Your Hands — Instead Of The State's

Though many people assume that prenups cover issues like custody or child support, they actually don't — they're simply about property and assets, which, if you don't have a prenup, will be divided according to your state's particular divorce laws, whether you agree with them or not. As Jeff Landers wrote in Forbes:

[I]t’s a question of which prenup you prefer: one you draw up yourselves through careful thought and open communication, or one that your state government already has in place for you and everyone else, by virtue of its divorce laws?

6. Prenups Speak To The Reality Of Each Marriage, Not Broad Stereotypes

A lot of the writing against prenups assumes that all marriages pan out in the same way — one partner (typically female) eventually scales back or completely drops her career, most likely to care for children. Thus, if the marriage ends, she is "owed" for the money she lost while raising the family and supporting her husband's career.

I can't speak to people who have had this experience. But I can tell you that it's not the only kind of marriage you can have. This is the great thing about prenups — every couple can decide for themselves, based on their own life plans and values, what to do if things go wrong.

My boyfriend and I aren't having kids, and I plan to work until retirement (or possibly after that, if I find that there's a job market for 65-year-olds who like to make queef jokes). Because of this, laws designed to protect women who gave up their careers to raise families simply shouldn't apply to me. If things go wrong for us, I will not deserve a penny of the money my boyfriend made on his own, and he won't deserve a penny of mine. That's what we want, as a couple — and prenups give us a chance to make that decision (or any other decision about how to prepare for the worst in our financial future).

7. Prenups Can Be An Expression Of Your Definition Of Love

To me, promising to be there for someone in sickness and in health, even when they got diarrhea from those weird-looking fish tacos that you told them not to eat, is not romantic in the rainbows-and-fairytales sense.

But pledging to try to not be vengeful or to needlessly financially hurt my dude if we ever split up, even if I am insanely angry at him and spend all day thinking about how I'd like to force-feed him bad fish tacos, is extremely romantic. To me, our specific prenup says, "I love you for you, and only you; and if we ever fall out of love, we're going to honor those people who once were in love by trying to not needlessly hurt each other out of anger and pain."

Is this the right romantic gesture for everybody? No, just as local divorce laws are not the right way for every divorcing couple to split up their property. But for me — a pragmatist, a child of divorce, and a grown woman who has already seen a few of my (female) friends' lives wrecked by the financial aftermath of a prenup-less divorce — saying "even if we fall out of love, we won't try to destroy each other" is more romantic than a thousand flash-mob proposals.

This isn't all to say there aren't toxic, sexist prenups out there; there are. There are also toxic, sexist marriages, too. But just as you can strive to have a supportive, egalitarian marriage, you can also try to plan for as supportive and egalitarian a divorce as possible — while still doing your best to make sure that it never happens. After all, it's your marriage; and nowadays, that can mean anything you want it to.

More like this
Kim Kardashian Father’s Day Tribute To Kanye West Called Him “The Best Dad”
By Stephanie Topacio Long
Pete Davidson Pops Up In This Hidden Scene From The Kardashians Season Finale
By Jake Viswanath
5 Ways To Stand In Solidarity With Women In America From The UK
By Sophie McEvoy
How To Fight For Reproductive Rights, Based On How Much Time You Have
By Courtney Young
Get Even More From Bustle — Sign Up For The Newsletter