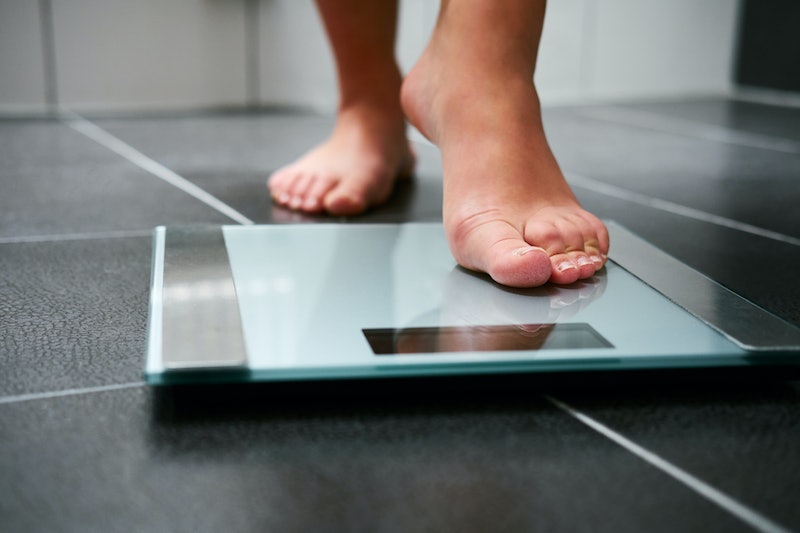 A new study confirms what most of us probably already knew: Women feel worse about their bodies than men do. Shocker, right? Between all the body-shaming of female celebrities, Instagram accounts where women gain popularity from being perfect, and the prevalence of eating disorders among women, this shouldn't be surprising. And given our society's rampant fatphobia, it shouldn't be shocking either that few people of any gender approve of their looks.

For the study, Yahoo Health surveyed nearly 2,000 Americans ages 13 to 64 about their body image. Asking whether participants' body image was positive, negative, neutral, or ambivalent, they found that 20 percent of the men but only 11 percent of the women were body positive. Altogether, 70 percent of men were body-positive or neutral, while less than half of women were. So, if you're a woman who feels negative or ambivalent about her body, you're not alone. In fact, you're in the majority.

There was also a discrepancy between men's and women's body image throughout the life cycle. Teenage girls had the most body image problems, with 94 percent experiencing body shame, and boys were 3.5 times more body positive than girls. Men typically went from body-positive to body-neutral throughout their lives, while women stayed body-negative or went from ambivalent to neutral.

Speaking to Yahoo Health, psychologist Sari Shepphird blamed the usual culprits for women's poor body image: insensitive comments, the media, and the Internet. “It’s still more acceptable to comment on a woman’s body,” she said. If you doubt whether these influence are real, here are four more studies proving that beauty standards and body-shaming have a huge impact on women.

1. Women Spend Nearly An Hour A Day On Their Appearances

Women are so superficial, amirite? No, women are not being vain when they spend an hour in front of the mirror — they're struggling with poor body image. When you add it all up, we spend about two full weeks a year primping. That's enough time to read several books or take a vacation! Adult men spent two hours less per week working on their looks than adult women on average, according to a TODAY.com survey.

This review by Common Sense Media also found that one in four children have dieted before age seven and that a third of boys and over half of girls wish their bodies were thinner. These numbers are far larger than the one in three children considered overweight and obese, which wouldn't justify dieting anyway.

3. Almost All Girls 15 to 17 Want To Change Their Appearances

The Campaign for Real Beauty study that produced this statistic also found that 70 percent of these girls had avoided everyday activities like school, conversations, and doctors' appointments due to appearance-related concerns.

4. 97 Percent Of Women Have At Least One Body-Hating Thought Per Day

According to a survey by Glamour, almost all women think about hating their bodies at least once a day, and women have 13 negative thoughts about their bodies daily.

These statistics support the argument Naomi Wolf made in The Beauty Myth back in 1991: Dieting culture and beauty ideals can hold women back from achieving success in other areas of their lives, which marks a step back for feminism. It's not women's fault, but it's a problem we should all be working to fix.

More like this
Olivia Munn Got Real About How Her Body Hasn’t “Snapped Back” Post-Pregnancy
By Stephanie Topacio Long
34 Quotes That'll Inspire You On Juneteenth & Beyond
By Syeda Khaula Saad and Siena Gagliano
6 Abortion Advocates To Follow On TikTok
By Sara Youngblood Gregory
The Best Underwear For Sensitive Skin, According To A Dermatologist
By Alexa Vazquez
Get Even More From Bustle — Sign Up For The Newsletter