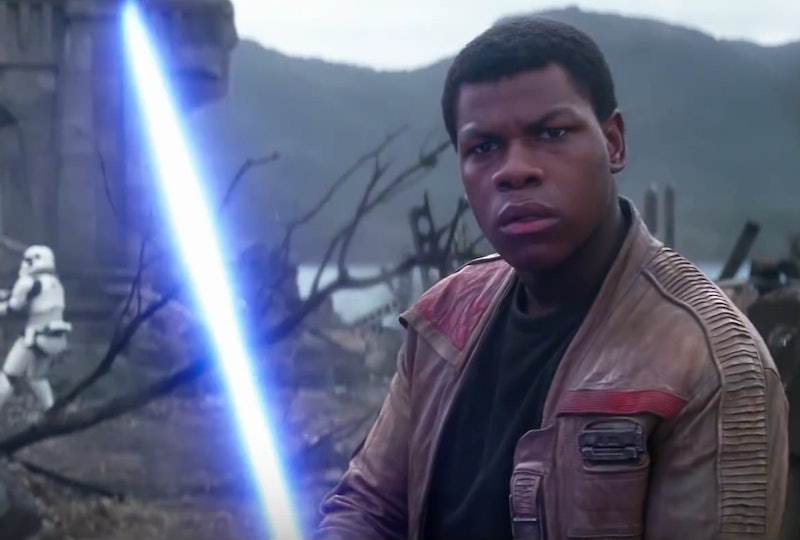 Coming out of Star Wars: The Force Awakens, I had no doubt that Rey, the girl who grew up orphaned on Jakku, has the Force. After being called to by Luke Skywalker's old lightsaber, she was able to withstand the Force of Kylo Ren when he attempted to get the map to Luke Skywalker from her mind and, later, was able to summon Luke's lightsaber and use the Light to guide her fight against Kylo. The last shot of the film was of her holding out the lightsaber to Luke, a clear sign that she will usher in the new generation of Jedi heroes in Star Wars. But, what about everyone's favorite stormtrooper defector, FN-2187/Finn? Will Finn become a Jedi in future Star Wars movies?

In early trailers for The Force Awakens , it looked like Finn would be the one picking up the lightsaber and continuing the Skywalker legacy. Trailers showed clips of Finn wielding Luke's blue lightsaber, gearing up for a fight against the series' newest villain, Kylo Ren. And in The Force Awakens, Finn does, indeed, wield the lightsaber with relative success. However, he is never explicitly identified as being strong with the Force — neither by Maz Kanata nor by Kylo Ren, both of whom are quick to see the Force in Rey. Still, there is strong evidence to support that Finn will become a Jedi in future films. Here are the seven biggest reasons why.

1. Finn Wields A Lightsaber In Battle

Lightsabers are typically seen as weapons of the Jedi — crafted by each new Jedi as a right of passage. While regular folks like you and me haven't been known to use lightsabers, it's not impossible for a non-Jedi to use one. Han Solo was seen using one in the original trilogy. The trick, according to Star Wars fans, is that only Jedi are truly equipped to use them in battle. If a laymen such as myself were to pick one up to fight Kylo Ren, they'd probably end up chopping off one of their own limbs. Since Finn escaped the duel with all of his limbs in tact, it's fair to say that, while the lightsaber does not belong to him, and while he may not be strong with the Force yet, he could have some good Jedi mojo in him that points to a later development.

When the First Order attacks and Finn goes to try to find Rey, Maz gives him the lightsaber she previously attempted to give Rey. While she seems to know that Finn isn't the weapon's rightful owner, she trusts him enough to be able to use it correctly. She sees the Force in Rey, and her decision to give the lightsaber to Finn suggests she might see a bit of that in him as well.

3. Finn Chooses The Light Side

Unlike Rey, Finn begins his journey in The Force Awakens squarely on the Dark Side. Conditioned to blindly follow the orders of Captain Phasma and the First Order, Finn is somehow able to overcome his rigorous training (and, likely, brainwashing) and escape. He then chooses to join the Resistance and face the First Order to save Rey, despite his desire to run as far as possible from his past. In other words: he's brave and in control of his own destiny.

4. Finn Believes In The Force

Finn might not know exactly how the Force works, but he does believe in it. As we know from previous Star Wars installments, believing in the Force and one's ability to use it is half the battle.

When Kylo Ren and his stormtroopers first arrive on Jakku to find the map to Luke Skywalker, Kylo senses that there is something off about Finn, then known only as FN-2187. He's right: Finn has just refused to fire upon innocent townspeople, thus defying orders. Later, when Finn helps Poe escape from the First Order, Kylo immediately identifies him as the stormtrooper from Jakku without being told the identity of the traitor. Kylo Ren is strong with the Force, suggesting that he might have been able to sense Finn's alleged awakening (this, of course, relies on the assumption that Finn was awoken when he decided not to act for the Dark Side).

6. Finn And Rey Trust Each Other

Finn and Rey form their alliance almost immediately after their first meeting. They are thrown together and trust each other completely. Maybe their implicit trust has more to do with their shared bond with the Force and less to do with Finn's undeniable charm and Rey's undeniable skills.

So, I know this isn't very scientific, but think about it: Finn could have easily been killed after his battle with Kylo Ren, and yet, he survived. Why keep him around if not to make him a part of the next generation of Jedi? Just because he's not as powerful as Rey doesn't mean he can't still be a force to be reckoned with (pun intended).

It seems more than likely that Finn is on his way to becoming a Jedi. At the very least, he's certainly made himself a valuable ally to the Light Side. I'd bet on Finn coming more into his own and getting in touch with his Jedi side in Episode VIII.