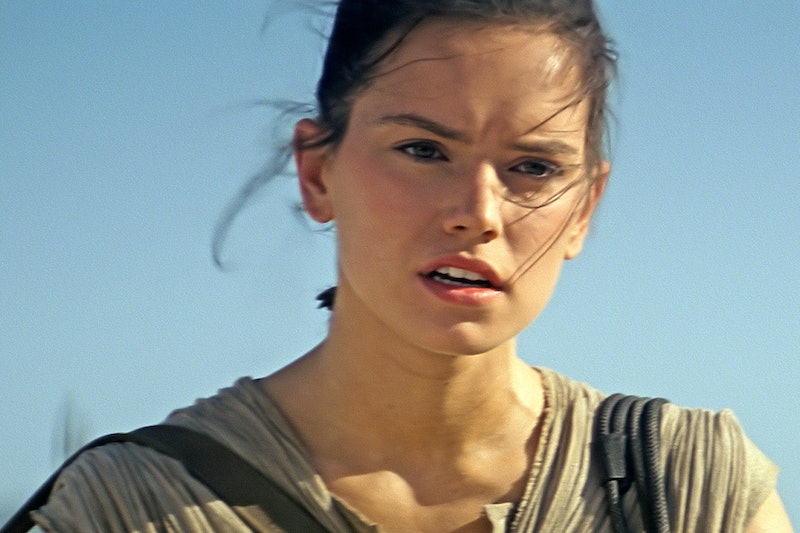 Ever since we were introduced to badass scavenger Rey in Star Wars: The Force Awakens, fan theories about her mysterious origins have been blowing up the Internet. While we're no closer to figuring out who Rey's parents are, we now have some new evidence that Kylo Ren knows who Rey is, based on lines of his from both the film and the novelization. Unfortunately for our friend Rey, Kylo Ren is a weeeeee bit of a jerk, so whether or not he decides to divulge this information is as of yet unclear.

So far the theories of Rey's parentage have spanned the entire galaxy. She could, for instance, be Luke Skywalker's daughter, which seems to be the front running theory in the fandom. A few others speculate that she could be a sibling of Kylo Ren's that Leia and Han were somehow made to forget, or hid for her protection. Others still are theorizing that she is a relative of Obi-Wan Kenobi, which seems compelling when you realize that Daisy Ridley was allowed to keep her Kenobi-esque British accent for the film (when we know she can do an American one based on her voice work), but Finn, a fellow British actor, americanized his. Or we could all just as easily shoot all these theories to hell if she ends up being another Force baby or was born to parents we haven't even heard of yet.

But regardless of Rey's parentage, there is one theory I am particularly invested in: Kylo Ren knew Rey from Luke's training. It is canon that Kylo Ren destroyed all of the padawans in Luke's tutelage, but judging from Rey's vision, it is entirely plausible that she was hidden on Jakku. And what reason to hide a Force-sensitive child if not to keep them safe from the newly-minted mass-murdering Sith? Others dig deeper into the theory, suggesting that Kylo Ren himself was the one who spirited Rey away, for some reason unable to kill her despite Snoke's orders (possibly because she is, in fact, a relation).

Regardless of Rey's history and how or why Rey was smuggled into Jakku, one thing is clear — by the end of the movie, Kylo Ren knows who she is, even though she does not. Here are all the clues that filmmakers dropped, including one that only just came to light:

It is confirmed by the filmmakers that the men we see standing alongside Kylo Ren in Rey's Forceback were the very Knights of Ren that Kylo Ren leads. Curiously, when one of them leans down to kill Rey, we see Kylo Ren plunge his red lightsaber into the man's chest to stop him. It is unclear what this means — it could support the theory that Kylo Ren stopped Rey from being killed among her fellow padawans years ago, or it could be a flash of something that hasn't happened yet. But in any case, it indicates that their fates are somehow tied.

Kylo Ren Makes Several Indications In The Film That He Knows Who Rey Is, Or Who She Might Be

When Kylo Ren is informed of Rey's interference, he immediately says, "What girl?" This doesn't mean much on its own, but once you watch the rest of the movie unfold, this definitely seems to be the first hint that he suspects who she is.

The script for the movie was released, including the subtext for the moment Kylo Ren tries to shove his way into Rey's memories and the two of them both pause, a little bit stunned: They react to a feeling that passes between them, an energy they recognize in each other. His foreknowledge of Rey might also explain why he was comparatively much less aggressive in searching her mind than he was with Poe Dameron, even claiming at one point to not want to hurt her (when we know this is his fave hobby).

He later indicates that he knows her strength when he hears of her escape and immediately says that she will become more of a threat the longer she spends unchained in the base. This could be true of any Force-sensitive individual, but he already knew she was Force-sensitive before she arrived at the base — only if he knew her would it be completely plausible for him to know just how much of a threat she could become.

Tumblr user aimhighincaseyoufallshort shared a passage from the novelization of The Force Awakens in which there is more dialogue during the fight between Kylo Ren and Rey than we heard in the movie. The book isn't officially released until January 9, so this isn't 100 percent, but according to the user the text right after Rey Force-summons Luke's lightsaber away from Kylo Ren reads:

Rey appeared equally shocked that her reach for the device had exceeded his. She gazed down at the weapon now resting in her grip.

His words unsettled her: Not for the first time, he seemed to know more about her than she did about herself.

"IT. IS. YOU." If this is canon, that means two things: Kylo Ren for sure knows who she is, and for some reason, her identity makes her more worthy of his grandfather's lightsaber. This could either mean that she is Luke Skywalker's daughter, or that Anakin Skywalker's Force ghost was like, "NOPE, Kylo Ren, not today."

All of this evidence combined has nothing on the fact that, for whatever reason, Kylo Ren repeatedly spares Rey's life. He saves her in the Forceback, he doesn't threaten her with death in her holding cell, and in the one pivotal moment he could have killed her in battle, instead he offers to become her teacher. Now, I'm not exactly bros with Kylo Ren, but I know enough between his frequent tantrums and unabashed rivalry with General Hux that he isn't exactly the ~teaching~ type. The only thing that could explain his vested interest in Rey is that he knows exactly who she is and what she's capable of — and for some reason, he must think he can take advantage of it.