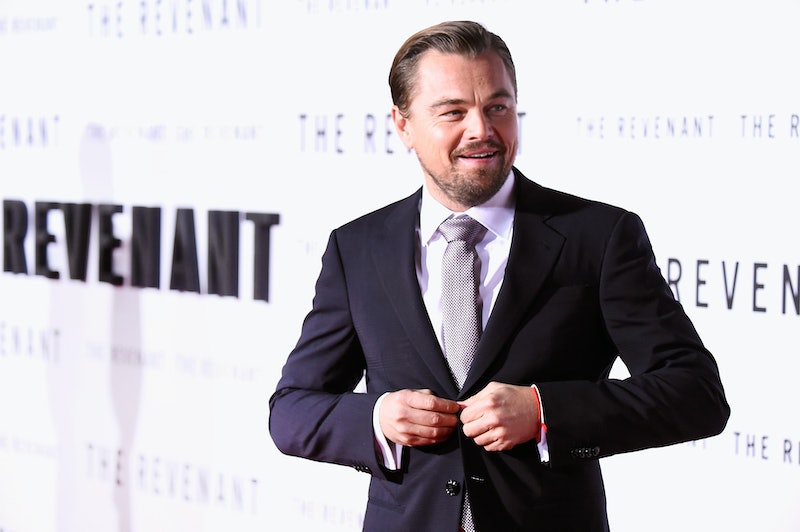 It was an odd year for movies: Many of the most promising concepts turned flat in execution, somehow just not quite coming together to create a compelling cinematic experience. Suffragette, Steve Jobs, Trumbo, The Danish Girl, and Joy all suffered this fate, and — though this might be an unpopular opinion — so did The Revenant, which featured two of the best male performances of the year in Leonardo DiCaprio and Tom Hardy, but succumbed to an excess of excess. Yet despite The Revenant's controversial release, its star performance rose above the material, and so it's no surprise that DiCaprio won the Golden Globe for Best Actor in a Motion Picture, Drama. Perhaps even less surprisingly, DiCaprio's earnest, lengthy acceptance speech seems tailor-made to appeal to the Academy in the lead-up to the Oscars.

"This film was about survival. It was about adaptation. It was about the triumph of the human spirit," DiCaprio said, going on to thank the tireless work of director Alejandro Iñárritu, who also won Best Director, and highlighting the plight of First Nations and indigenous peoples around the world. He added a quick joke, explaining that though Tom Hardy plays his nemesis in The Revenant, he knows Hardy would never leave him to his death on a frosty mountaintop. I just hope they never find themselves in a situation to find out.

By metric of sheer degree of difficulty alone, DiCaprio's turn as the betrayed member of an American trapping expedition in the frosty, rural midwest deserves recognition. Much of the film passes without a word, the silence filled only by Ryuichi Sakamoto, Alva Noto, and Bryce Dessner's sumptuous score. He's mauled by a bear, traverses the barren country, and sees his son killed before his eyes, all within a two-and-a-half-hour span. And, in execution, too, his work stands out among performances that similarly rose above their movies, like Michael Fassbender as Steve Jobs in the movie of the same title or Bryan Cranston as Dalton Trumbo in Trumbo.

A good cast is not the same as a good movie, but the cast of The Revenant was superlative. DiCaprio's performance was as gritty as the surrounding material. In his speech, he rightly credited the talent of Tom Hardy, ("a beast; an unbelievable talent") who played the cold, conflicted villain flitting around the periphery of DiCaprio's Revenant narrative. Much of the acting circled around actual, physical pain, with his character having suffered a bear attack, a fall from a cliff, and a swim in a bitterly cold river, and the emotional pain he suffers leads him on a revenge quest comes across in an understated, poignant manner. The role itself broaches the realm of the unbelievable — Glass comes across as almost Jesus-like in his inability to die, and his titular rebirth — DiCaprio grounds the role in human sentiment. Though much of the work is intensely physical rather than emotional work, it still seems to be the kind of role that awards ceremonies love to reward, which could put DiCaprio in a good spot leading up to the Oscars in February — finally.

More like this
At 14, Rachel Sennott Had A Sexual Awakening While Reading 'Twilight'
By Samantha Leach
Christina Perri Reacts To Her 'Twilight' Song Being One Of YouTube's Most-Viewed Ever
By Radhika Menon
What’s New On Netflix: 'Never Have I Ever' & 'Indian Matchmaking' Return
By Arya Roshanian
Jamie Foxx Revealed The Question That Got Cameron Diaz To “Un-Retire”
By Grace Wehniainen
Get Even More From Bustle — Sign Up For The Newsletter