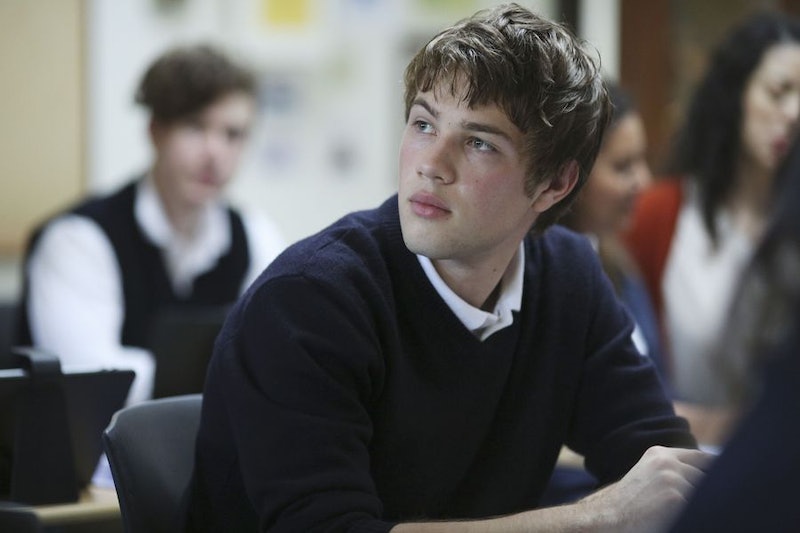 All of the promos made it clear that American Crime Season 2 would center around a rape accusation, but that by far isn't the only important topic the ABC drama is looking to address this year. While it's true that a majority of the season premiere focused on the fictional case of Taylor Blaine, who claims to have been sexually assaulted by members of his high school's all-star basketball team at a party, there is so much else going on throughout the hour that also warrants the audience's attention. For starters, there's the very distinct line that's been drawn between the working class and upper class sectors of the community.

The incident involves students from an elite private school, and there's a distinct level of nepotism that resides within these walls, especially when it comes to the basketball team. It's as if the players' athletic success makes them both immune to and protected from the outside world. And it's a big part of what's made Taylor feel like so much of an outsider long before this crime occurred. Unlike the majority of his classmates, his family isn't wealthy. Far from it, actually. So when the lewd pictures of him begin circulating on social media, the "white trash" taglines add an extra level of degradation to an already horrific act.

Then there are the racial and other prejudicial factors that are already coming into play, like when Regina King's character, Terri Lacroix, complains about how her son, Kevin, isn't dating the "right kind" of black girl. As her husband recalls, initially she was just AS content if Kevin brought home a girl instead of a boy. Then she wanted him to find a black girlfriend. And now she's not satisfied with the black girl he is dating. Granted, a majority of this can be chocked up to Terri's controlling nature, but it still signifies that racial tensions and homophobia exist even in these more personal situations.

And let's not forget all of the misguided parental issues going on throughout the season premiere. I can't be the only person who initially thought Coach Dan was a pervert as he videotaped a high school cheerleader dance-flirting with one of the basketball players. However, it is then revealed that Dan is actually the cheerleader's father, and instead of confronting his daughter about the questionable footage, he sent it to his wife for her to handle. Oh, and the flirtation, by the way, was solely Becca's fault, according to her dad. When even some of the blame was potentially being put on one of his players, Coach Dan immediately came to their defense over his own daughter. Needless to say, he does not handle the rape accusations against two of his players well.

The premiere episode promises that American Crime will make viewers think about a variety of sensitive issues in unexpected ways this season, which means it could have a serious cultural impact over the course of its 10 episodes.

More like this
Amanda Gorman Shared A Powerful Message On Meghan Markle’s Penultimate Podcast
By Darshita Goyal
The 'Firefly Lane' Book Ending Teases Way More Tears To Come In 2023
By K.W. Colyard
This 'White Lotus' Symbol Could Hint At A Major Character's Death
By Grace Wehniainen
Everything To Know About 'The Peripheral's Potential Season 2
By Brad Witter
Get Even More From Bustle — Sign Up For The Newsletter