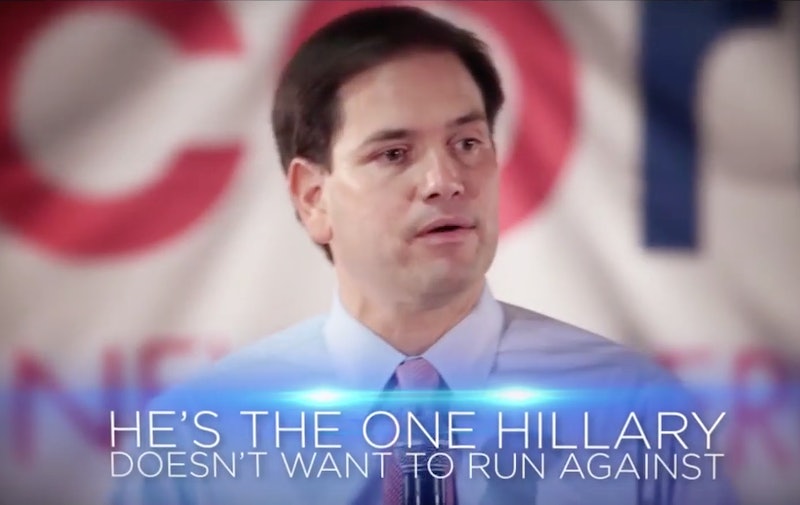 There's not much better than watching presidential hopefuls face-off live debate style, struggling to find the best comebacks to take one another out. Watching them basically act as the star of their own one-minute movies, however, is on another level of entertainment entirely. Ah, the television advertisement. This week brought so many reasons to believe that sitting down with a tub of homemade popcorn and watching a few of the GOP candidates' latest TV ads is way better than any Saturday night at the movie theater.

As is routine with any outing at the movies, you've got to have a few trailers. And a couple Republican candidates' TV spots work just in the same way — they give you a bit of excitement about what the stars have to offer, but you're aware all the while that these are not the folks you came out for.

I'm not going to lie. When John Kasich's newest advert started on my screen, I thought it was a commercial for a Dodge Ram truck. The signs are all there: the country music in the background, a narrator with a ridiculously deep voice, and the sense that dust somehow just got all over the screen. The ad literally begins with, "He lived a hard-scrabble life in a rusty steel town."

This commercial's message is about never giving up, and I refuse to give up hope that there's footage somewhere of Kasich riding a pick-up truck on a gravelly road that just didn't make it into the final 30-second cut.

While Kasich's target audience appears to be America's cowboys, Marco Rubio's latest ad is going for residents of a particular state: South Carolina. The commercial plays up Rep. Trey Gowdy's endorsement for Rubio, but there's so much more to this brief clip than meets the eye. With an advertisement titled, "Nobody better," I'm expecting a whole slew of reasons why Rubio is my guy and the country's guy. The golden audio of Gowdy that Rubio's super-PAC picked, though, has him saying Rubio is the best on two issues: public safety and national security. And these two — when you think more generally — are actually kind of just one issue.

It may be a bit predictable to tell you that frontrunner Donald Trump's first TV spot, released on Jan. 4, is in all ways the main attraction, but there's just no getting around it. I apologize, but the advertisement is an audio-visual masterpiece. With no apparent need to put information into context, the ad jumps right in with, "The politicians can pretend it's something else, but Donald Trump calls it radical Islamic terrorism." Trump's always been more of a pronoun guy, I suppose, but eight seconds in and I'm lost in a deep fog of vagueness.

And how long is that proposed ban on Muslims from entering the U.S., Mr. TV Narrator? "Until we can figure out what's going on," Mr. Narrator explains. Then comes a quick bit about cutting the head off ISIS, taking their oil, and, of course, making Mexico pay for a wall before a finale of triumphant music and applause.

It made me laugh — in that trying-to-refrain-from-true-hysterics kind of way. It made me cry — like, really cry. All I need for the next round of TV spots is a pair of 3D glasses, so I can get the feeling that I'm right by Kasich's side in that Dodge pickup.