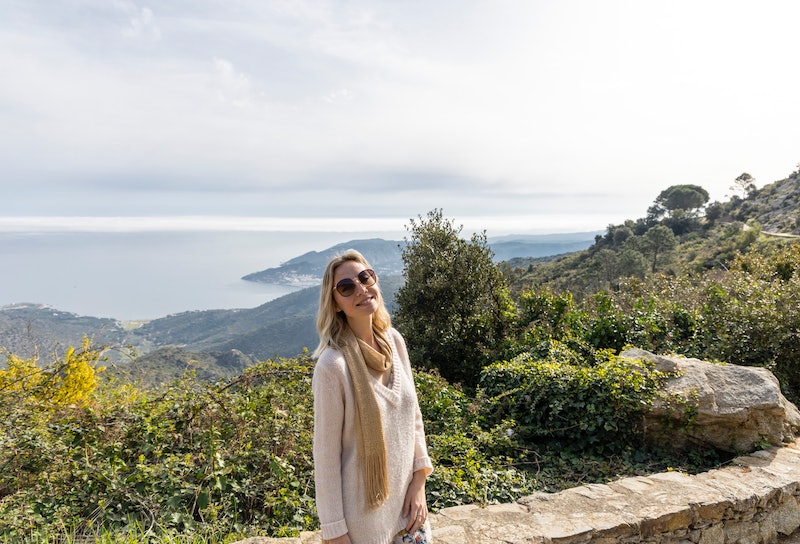 It’s one thing to move abroad — it’s a whole different experience to move abroad alone. This time last year, I quit my job and bought a one-way ticket to Peru with no clue where I was going to settle or how I was going to make money once I got there. It may sound crazy, but I had moved abroad twice before, so I felt like I knew what I was getting into. The difference this time around was that I had no real plan upon arrival. Even though half of my friends and family thought I was totally crazy, I learned some invaluable life lessons from my spontaneity that I wouldn’t take back for anything.

That said, the trials that come with moving to a different country alone aren't for everyone. It's a test that will bring out both the worst and the best in you, and you won't be able to anticipate any of it until it happens. But you shouldn't let that scare you, because it will give you an opportunity to grow in ways you didn't even know that you needed to.

If moving abroad alone is something you're seriously considering, here’s what you should know before you decide to take that leap.

1. Everyone Will Have An Opinion About Your Safety

If you’re a young woman who’s planning to move abroad alone, brace yourself for a never-ending deluge of concerns. Prepare for these fears to be amplified if you’re moving to a country that is perceived as less safe, or if you’re going alone instead of with a group or a significant other. Obviously, most of these concerns are well meaning; (I love you, Mom!) but if you take them to heart, they'll only work to make you feel more paranoid than you already do.

Yes, something bad could happen. But something bad could happen when you walk out your front door tomorrow, too. If I had listened to all of the advice I heard about staying safe as a woman, I’d probably be hiding out in a bomb shelter right now. It’s important to take steps that will make you feel safe, but don’t let the fear hold you back. Instead, focus on all the possibilities for experience and growth with this opportunity.

2. Things Won't Go According To Plan

After moving abroad three times, I’ve realized that planning ahead only gets you so far. So don't drive yourself crazy trying to prepare. Before moving to Laval, France, I spent weeks looking at apartments online, trying to gauge proximity to bus stops, and vetting potential roommates. All of that work ended being pretty pointless, though.

You won’t really understand the feel of your new town, or which apartment fits your needs best, until you see it for yourself. You may also miss out on the chance to live with some great people because you chose your living arrangements too quickly. When I moved to Peru and France, living arrangements fell into my lap within the first month of arriving.

Don’t try to rush into a living situation before you even get to your destination. With a little effort and networking, your new home will probably find you — because, in my experience, people actually like helping out. Which brings me to the next point...

3. People Will Probably Want To Help You Out

You’ve probably heard tales of people taking advantage of tourists abroad. While those stories are very real, they shouldn't discourage you from moving, either. When I moved to France alone, couch-surfing became an immediate safety net for me. Two weeks into my move, multiple families hosted me and I made an entirely new group of friends my age. One family even drove me around to look at places to live, helped me open a bank account, and lent me a bike to use throughout the year. They were so generous it was almost overwhelming, but I certainly welcomed it.

It’s healthy and normal to be skeptical of strangers when moving abroad, but don’t let that skepticism stress you out too much. Whether or not the news reports it, people really will go out of their way to be kind and helpful. And if a situation feels sketchy to you, proceed with caution and trust your gut.

4. The Experience Of Moving Abroad Is Worth Making Sacrifices For

You don’t need a load of cash to move away; you just need to get creative. My path abroad was not a linear one — especially when I decided to quit my job to move to Peru. As a preschool teacher who was only working 30 hours a week, money wasn’t exactly rolling in. To offset that, I spent all of my free time scrimping and saving before I left. I made contacts in my classroom and started babysitting on the side. Which meant spending a lot of nights, weekends, and even school breaks watching other people’s kids.

A lot of the time it was exhausting, especially the two week stretches when I only came home to sleep. Despite the occasional burnout, though, I didn’t regret any of it. Not only did I build meaningful relationships with the families who I worked for, but I finally saved enough money to launch myself to another country. I also had the peace of mind that I could rely on my nest egg while I got settled.

If you really want to move abroad, you will find a way to do it. Trust me, the exhaustion and extra hard work will be 100 percent worth it.

5. Staying In Your Comfort Zone Is A Waste

It’s usually easier to make friends who share your language and customs, but don’t let that be your excuse for staying in your comfort zone. During a teaching apprenticeship in France, I noticed a lot of the women who participated in the same program quickly made friends with each other. Although those friendships immediately benefited them, most were anxious to leave by the end of their stay — partially because they hadn’t made any real connections with local residents.

Did I miss out on those friendships? Maybe, but I knew I’d have plenty of time to speak English and hang out with Americans when I was back in my own country. Making friends in a new country is harder for some people than it is for others, especially when foreign languages or cultural differences are involved. But the only way you’re going to get better at a foreign language or learn a culture’s customs is to immerse yourself in it. If you need a friend to wax nostalgic about home, go for it. Just make sure to reach out for those intercultural friendships, too. You’ll probably learn more about yourself than you would have otherwise — and maybe you’ll even have friends to visit when you return.

6. You Can't Run From Sadness

Moving abroad may seem like a way to escape your problems, but it usually only amplifies them. It can be an intense experience, but also a meaningful one if you take it as an opportunity to face your demons head-on. Each time I moved abroad, holidays alone and dreary weather suddenly made getting out of bed a momentous challenge for me.

Although those periods were difficult, it taught me new ways to cope with my depression. Ultimately, those hard times made me a stronger and more resilient person. I discovered that, sometimes, trying to escape your issues forces you to face them. If you find yourself in a similar situation, take it as a blessing in disguise.

7. You Will Find Confidence You Didn't Know You Had

Here’s the secret nobody tells you about moving abroad: you’ll likely be more doubtful of yourself than ever before, but you'll also discover a new-found confidence you probably never considered possible.

Despite how unpleasant my bouts of depression, difficulty adjusting to a new culture, and occasional feelings of homesickness were, all those experiences gave me more confidence than I’ve ever had in my life. When it comes down to it, I know now that I’m capable of being resourceful in unusual situations. Now, when I have doubts about my capabilities, I’m always able to fall back on these thoughts: I moved abroad alone. I found a place to live. I found work. If I can do all of that on my own, what can possibly stand in my way?

More like this
Where Was 'The Bachelorette' Season 19 Filmed? More European Destinations Are On The Way
By Radhika Menon
Scotland's First Period Dignity Officer Is... A Man?
By Darshita Goyal
The 4 Most Forgiving Zodiac Signs
By Kristine Fellizar
The 3 Most Honest Zodiac Signs, According To Astrologers
By Kristine Fellizar
Get Even More From Bustle — Sign Up For The Newsletter