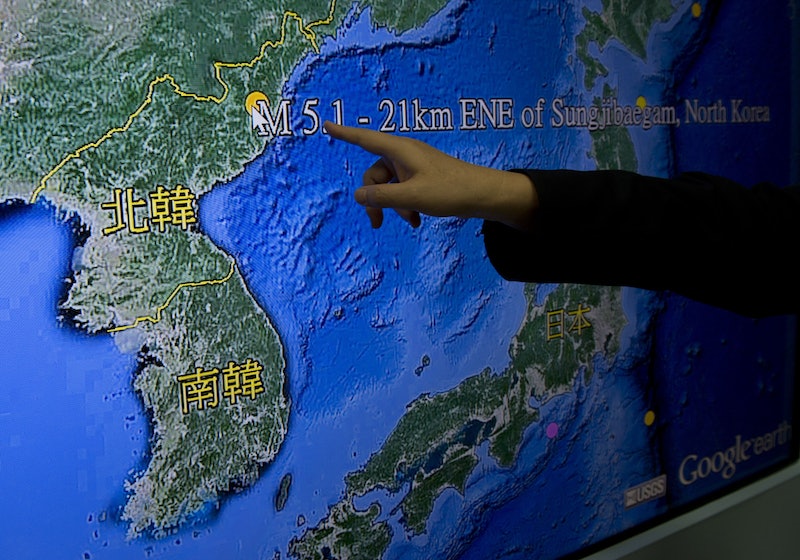 A 5.1-magnitude man-made earthquake in North Korea potentially did significant damage, not to the ground, but to already the frigid relations between the East Asian nation and a number of opposing countries, including the United States. With an announcement on North Korean state-run television that a successful hydrogen test bomb was the cause of the seismic event, South Korea's and Japan's governments have called for responses. The act resurfaces global concerns that North Korea will start a war, but the nation says it must be provoked before resorting to using a weapon.

Nothing's happened in terms of retaliation just yet, and it's not as if this is the first time North Korea has carried out a nuclear test to the knowledge of pretty much nobody else. Wednesday's event was the country's fourth nuclear test to produce earthquake-like effects, with the first having been carried out in 2006. Despite the continuation of its nuclear engineering program, the nation claims it has no plans to use any nuclear weapons unless provoked and that the expansion of its nuclear arsenal is for self-defense purposes. In the announcement, the North Korean government claimed, "if there's no invasion on our sovereignty, we will not use nuclear weapon."

Imposing even stricter U.N. sanctions is a likely route by member parties, though. The United Nations security council is now scheduled to meet in New York on Wednesday to discuss North Korea's claims and proposed actions. Seoul officials said in a statement that South Korea would "take all necessary measures including additional sanctions by the U.N. Security Council."

North Korea has not been careful to take seriously international sanctions nor international agreements, however. Various talks and treaties have failed to stick in the context of the country's nonproliferation process, each breaking down after no more than a few years. North Korea's satellite rocket launch in 2012 led to a Security Council resolution to expand existing sanctions against the nation. Then, in response to the country's March 2013 nuclear test, the Security Council agreed unanimously to impose tougher restrictions than were already in place.

Vague suggestions of a potential military response have also been common in negotiations with North Korea. Nuclear tests have not yet led to military action by the U.S. and its allies in the region, though the U.S. provides support to countries including South Korea and Japan. Whether Security Council members will agree to any sort of response outside of diplomacy is still unknown. In response to exchange of fire with South Korean border control, North Korea stated it was prepared to take military action against both South Korea and the U.S.

It should be noted that Wednesday's alleged nuclear test is still unconfirmed by the U.S. government. A White House national security spokesperson said in a release published late Tuesday that the government is "monitoring and continuing to assess the situation" in North Korea.