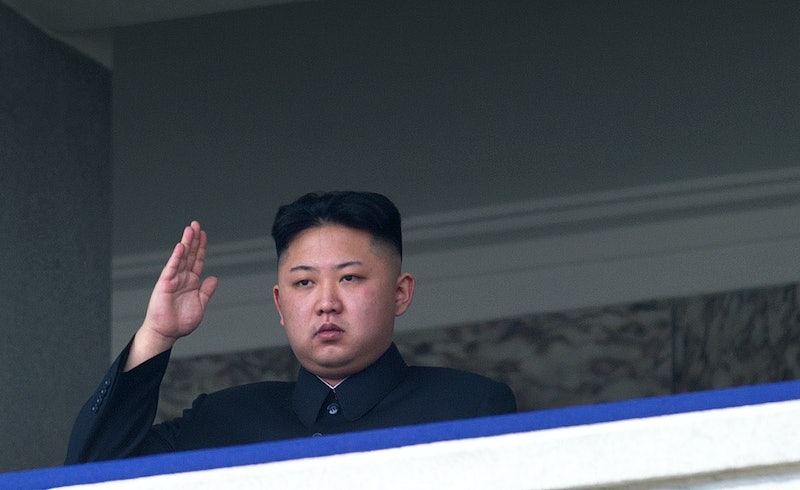 Despite the hush-hush that surrounds North Korea, it's not exactly a secret that the country would like to develop nuclear weapons it can use against the United States. Fortunately for Americans, that hasn't happened yet, but an event on Wednesday (North Korea's Wednesday morning, America's Tuesday night) could suggest that Kim Jong-un's country is one step closer to strengthening its arsenal. At around noon local time on Wednesday, a North Korean news agency confirmed that North Korea had successfully conducted hydrogen bomb test — the country's fourth nuclear test — that produced similar effects to an earthquake.

Reports of a 5.1 magnitude earthquake began rolling in earlier in the morning in North Korea, and a South Korean news agency quickly deemed the quake "artificial." The seismic activity occurred just about 12 miles from a known nuclear testing facility in North Korea, called Sungjibaegam, raising the initial suspicion that Wednesday's quake wasn't actually a naturally occurring quake at all. To make things even more suspicious, Wednesday would not have been — in fact, it is not — the first time that seismic activity in North Korea indicated a nuclear weapons test instead of an earthquake. Since 2006, North Korea has launched three other tests, each creating an increasing level of seismic activity.

In 2006, North Korea announced that it had carried out an underground explosion of its first nuclear weapon, a bomb made out of plutonium. Although the explosion occurred (successfully, if you're North Korea), the bomb measured less than a tenth of the size of the atomic bomb that the U.S. dropped on Hiroshima during World War II. It wasn't much of a threat, but the international community slapped North Korea with sanctions anyway, probably in the hopes of discouraging any future nuclear development.

About two and a half years later, North Korea confirmed in 2009 that it had once again tested a nuclear weapon. This time, the explosion registered a 4.7 magnitude. At that time, Russian estimates suggested that North Korea's bomb could have been much closer in size to the one that the U.S. had previously used. Again, North Korea got slapped with condemnations and sanctions from the international community.

In 2013, current leader Kim Jong-un launched the country's first nuclear test under his rule. That blast was larger than the previous ones – and initial estimates from Wednesday's blast suggest that the third blast might have been larger than this most recent one, also. Again, seismic activity tipped the international community off that North Korea had probably tested a nuclear weapon, which the state later confirmed.

This time, North Korea claims that it tested its first hydrogen bomb. The previous bombs (and the one used by the U.S. back in 1945) were atomic bombs, which are thought to be weaker than hydrogen bombs. Both are types of nuclear weapons. It's likely that the U.S. government will continue to investigate the situation as best it can without necessarily being allowed inside the secretive country to confirm the explosion.

In confirming the hydrogen explosion, North Korea made it clear that its nuclear efforts are of direct concern to the U.S. The statement given Wednesday (again, local time) said that "it is just to have H-bomb as self-defense against the US having numerous and humongous nuclear weapons," according to The Telegraph. North Korea claimed that it had a hydrogen bomb in its arsenal back in December. If legitimate, Wednesday's explosion would disrupt the widespread skepticism that the December claim was met with.