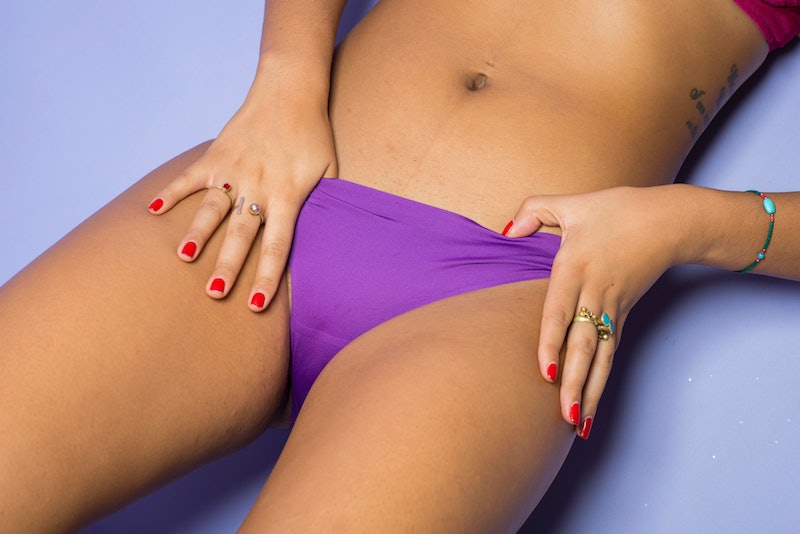 You probably know already that non-cotton underwear is the Devil. Or at least that's how it feels for people with a tendency towards yeast infections and UTIs. But have you been buying non-cotton underwear anyway, in the belief that, with a cotton crotch, all sins are forgiven? It turns out that this is pretty common behavior, but I have some seriously bad news for you and your underwear drawer: the cotton crotch alone will not save you. Too many women believe a cotton crotch will preserve their nether hygiene, when the reality is actually more complicated.

Sexy lingerie these days is usually not made of pure cotton, so believe me, I get it. I'd have an entire wardrobe of Elle Macpherson Intimates if I could (if I were a millionaire), despite the fact that they're mostly made of polyamide, elastane, stretch-lace and other such soft, charming-sounding materials. But if you're prone to bacterial problems in your vulva and vagina that are habitually caused by problematic underwear, you may need to take the plunge and go all-cotton, all the time.

Fortunately, lingerie purveyors appear to be (slowly) twigging to this, and are beginning to offer cotton lingerie that doesn't look like you bought it in a 3-pack. But to strengthen your resolve, here exactly why cotton crotches are insufficient when it comes to protecting your bits from nasties.

It's actually pretty basic. Cotton's main advantage is that it's breathable, or lets a lot of air circulate, thereby dispelling moisture that's built up in your genitals and the area around them. Moisture is the perfect environment for yeast, with the result that non-breathable underwear provides a more effective breeding ground for the beginnings of a yeast infection.

The same goes for UTIs. Most of us know that thong underwear is a risk when it comes to urinary tract infections, because the shape creates a heightened possibility of bacteria from the colon and bowel passing forward to the vagina and causing infection. But thongs are also a potential bacterial risk because of their propensity to move around, irritating the skin and tissue around the vagina and leaving it more open to infection. (You're seriously not supposed to wear them while exercising for this precise problem.)

Breathability is, we've got to note here, not a guarantee that you won't get an infection of some kind, and some women will report wearing all-synthetic everything for years without a single problem. It's not cause-and-effect; it's just an increased likelihood, particularly if you've got a tendency to get yeast infections (women with chronic stress, for example, get them more often than everybody else.)

The reality is that it's overall breathability and circulation that counts, not just cotton in direct contact with your parts. Even if your panties are cotton-crotched, if the rest of the material is non-breathable, it'll still trap moisture and germs inside the panties themselves, according to certain gynecologists. Some experts don't find it all that worrisome for the general population, but if bacteria are a recurrent problem for you, those cute polyamide panties need to go out the door. Silk and synthetics are particularly risky, because they're seriously moisture-trapping, even though they're often at the highest end of the lingerie rack.

Oh — and it's not like you can throw caution to the wind and go panty-free at all times; going commando is associated with its own risks, like a heightened likelihood of infections if you're a tampon user. So here's the basic point of view: if you've been going for synthetic panties without a problem, you may be one of the lucky ones, but many of us may need to start getting purist about our panties.