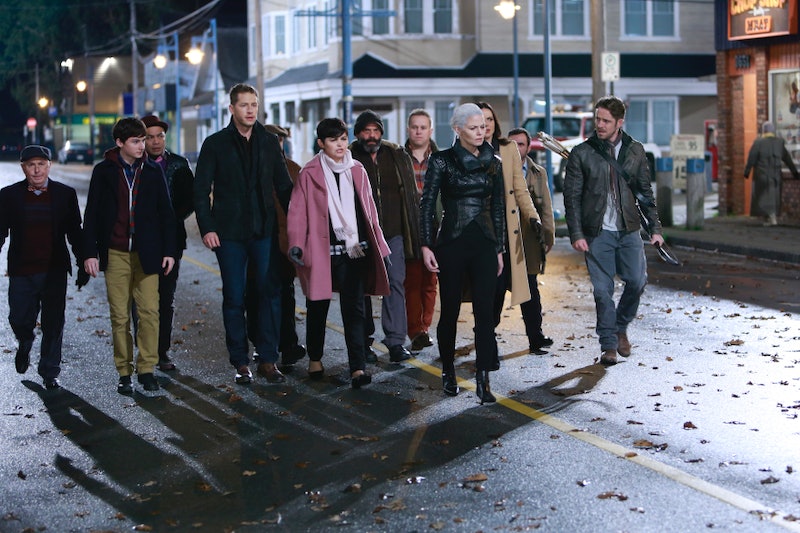 After an incredibly arduous (and some would say tedious) 11 episodes, we said goodbye to the first half of Once Upon A Time season 5 in December, and it wasn't a moment too soon. Generally, I can't bear a hiatus in this show — I need my Regina Mills fix on a weekly basis, thank you — but this time around, I was not only ready for it, but looking forward to it. The Dark Swan storyline, once so promising and potentially exciting, had fizzled and morphed into the Dark Hook saga that pretty much everyone hated (right?) and all the other beloved characters of the show, from Regina to Snow, had been robbed of any meaningful screen time or plots in favor of Captain Swan nonsense. Needless to say, I think we all needed a break, and we'll have it for a couple months longer since the Once Upon A Time Season 5B premiere date has been revealed, and we'll be back in Storybrooke on Sunday, March 6.

Before we rejoin our heroes and zeroes, you'll probably need to remember where we left off, no matter how hard you've been trying to forget it. Emma turned Hook into another Dark One in Camelot, he killed Merlin (another of the rare characters of color on this show meeting a terrible end), and then Emma concocted an hare-brained plan to keep her dark deed from Hook and everyone else while she secretly plotted to restore Excalibur, tether Zelena to it, kill her, and banish the darkness from them all. Obviously that failed, but boy, that didn't stop her from trying.

Eventually, Hook found out he was a Dark One by Zelena (because he was so much of a jerk that he couldn't actually tell that he had been tethered to the worst evil imaginable, apparently?) and went crazy, vowing to destroy Emma and take everyone to hell. We are actually going to hell — literally and figuratively, it seems, given the recent decline in quality of the show — but it's called the Underworld, and it'll give us a chance to meet Hades, Hercules, and Megara... oh, and to save Hook, who begged Emma to stab him with Excalibur so he could die for good. I can't wait for this to spectacularly fail, because it has to, right? (Please God, let me be right.)

March is still two months away, meaning there's time for the showrunners and writers at Once to (at least try to) turn this thing around. Hopefully, they take these 8 weeks to rewrite and edit themselves to return the show we originally fell in love with to the audience, because it's so sad to have lost something so promising and wonderful.