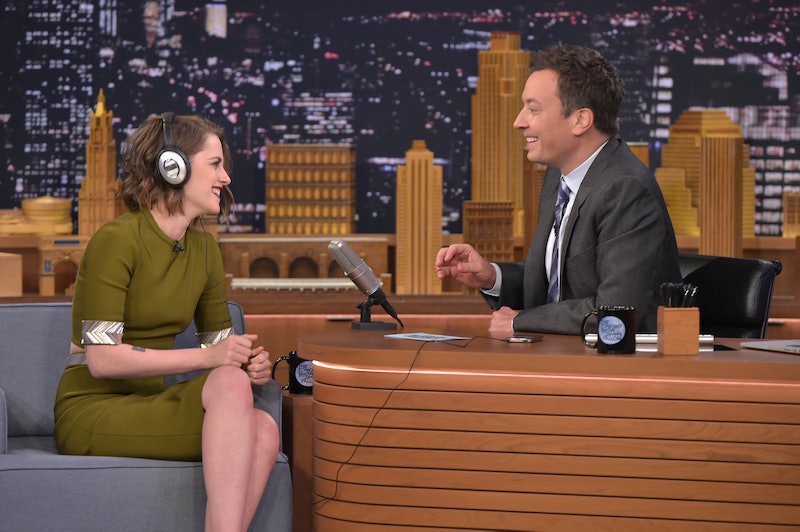 There are trolls that torture unsuspecting people on the Internet, and then there are larger scale trolls. Ones who have their own Late Night talk shows. You see, Kristen Stewart played The Whisper Challenge on The Tonight Show Starring Jimmy Fallon, which involved her trying to guess what Fallon was saying as she wore headphones that were blaring music. And the poor, super competitive actor didn't do so hot... much to Fallon's liking. That adorable jerk. I can't help but feel that he has an unfair advantage with these things, but I'll let it slide because he's one of my most favorite humans.

Back to K. Stew, though. I can't help but feel like this challenge was oddly prophetic. I mean, have you guys seen any of the Twilight "Bad Lip Reading" installments on YouTube? This is simply life imitating art. If we could call that art. Well, at least I think it's art. The only difference between Stewart's challenge and the Twilight videos? Other people are badly reading her lips in the latter. Either way, this whole thing was a long time coming. Especially since no matter the iteration of this type of "challenge," it never fails to disappoint. K. Stew was merely giving credence to a weirdly accurate forecast.

You can see K. Stew's prophecy come true below.

But now take a hard look at the videos that foretold this type of misfortune. Because, what's a prophecy without the predicted proof?

"Edward and Bella — A Bad Lip Reading of Twilight"

These videos make it abundantly clear why Stewart was put off by The Whisper Challenge.

In conclusion, The Bad Lip Reading YouTube channel is run by clairvoyants.

More like this
Cardi B Explains To David Letterman Why She Uses Her Star Power For Politics
By Jake Viswanath
Watch The Dramatic First Trailer For Netflix's Jennifer Lopez Documentary
By Alyssa Lapid
The Very Best Quotes From Dr. Taylor Swift’s NYU Graduation Speech
By Grace Wehniainen
Kourtney & Travis Crashed His Daughter’s TikTok Live In Their 2nd Wedding Outfits
By Grace Wehniainen
Get Even More From Bustle — Sign Up For The Newsletter