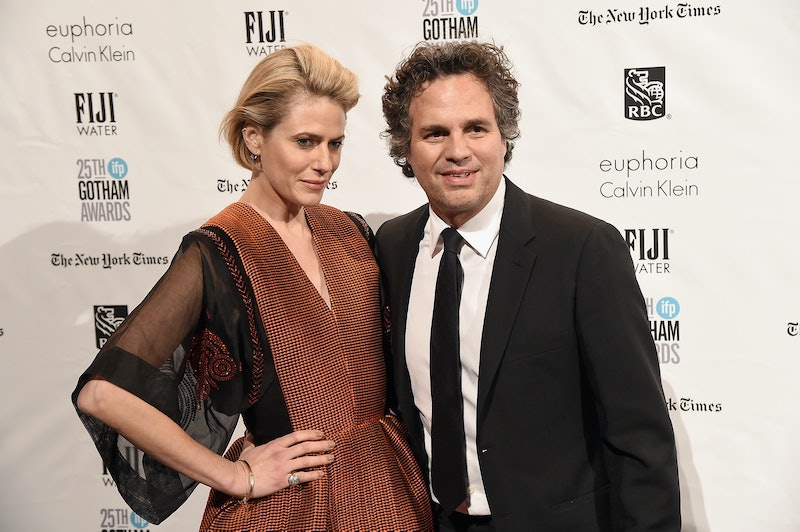 While it'd be totally understandable for a Hollywood actor/director to keep his family life under wraps, Mark Ruffalo has never been shy about expressing the seriously sweet love he has for his wife, actress Sunrise Coigney, and their three children. Ruffalo may be one of Hollywood's biggest heavy hitters, having been nominated and winning numerous awards and accolades for his work in over 60 films (!!), but he manages to always put his family at the top of his priority list. Thanks to his adorable social media posts, it's easy to feel like we know Ruffalo's family personally — there are plenty of picture perfect moments and things to know about the fam.

Ruffalo's acting career began way back in the early '90s, and he has had a steady rise to fame since. But he makes perfectly clear that he's less interested in being a leading man and more interested in doing work that he's passionate about, and acting as an activist for renewable energy sources and climate change. He acts both in big budget blockbusters like The Avengers and indies like Infinitely Polar Bear , but to his three kids (Keen, Bella Noche, and Odette), he's simply dear old dad.

Check out the sweetest snaps he's shared of his very un-Hollywood life:

Ruffalo was humbled to receive a Golden Globe nomination for Infinitely Polar Bear, and he even used a pun with a cute caption. Swoon!

His Cat Does Funny Stuff Too

In case you thought it was only your cat that did weird cat things, turns out, Ruffalo's kitty Hansel does too. The actor has spoken about his love of animals, including a rescue dog his wife brought home when she was eight months pregnant, and his daughter Bella's pet rabbit named BlackJack.

All The Halloween Hulks

Ruffalo was thrilled to see a bunch of lil Hulks on Halloween in New York City, thanks to one of his most famous roles in The Avengers.

He Lives For Embarrassing His Kids

Thanks to smart phones, when people do embarrassing things like trip in public, it can all be caught on camera and shared with the world instantly, like when Ruffalo's daughter tripped at a playground in Central Park and he shared it with the caption "lol." Come on, dad!

He Gets Silly With His Son

What dad doesn't love putting on a weird mask and snapping a selfie with their teenage son?!

Not Everyone Loves Birthday Cake

On Coigney's birthday, she had two cakes to choose from, but daughter Odette didn't seem to be feelin' either option. She got her own treat, though!

Ruffalo travels frequently for work, and sometimes his wife joins him (such as these gorgeous shots in Venice) — can I come next time?!

He refers to his wife and daughter Odette as "angels." SWOON.

What kids wouldn't want to join their dad at a big movie premiere?

Most people get dressed up to go to a wedding; the Ruffalos hit the Academy Awards. All in a day's work!

And The Ultra Glamorous Bathroom Selfie

I'm sure she loved being a part of this one.

Haven't we all taken a teeth-brushing selfie? Well, Ruffalo took it to the next step and posted it. Adorbs.

Now I'd like someone to try and argue that the Ruffalos aren't the cutest family ever... Spoiler alert: you won't win. They rock!