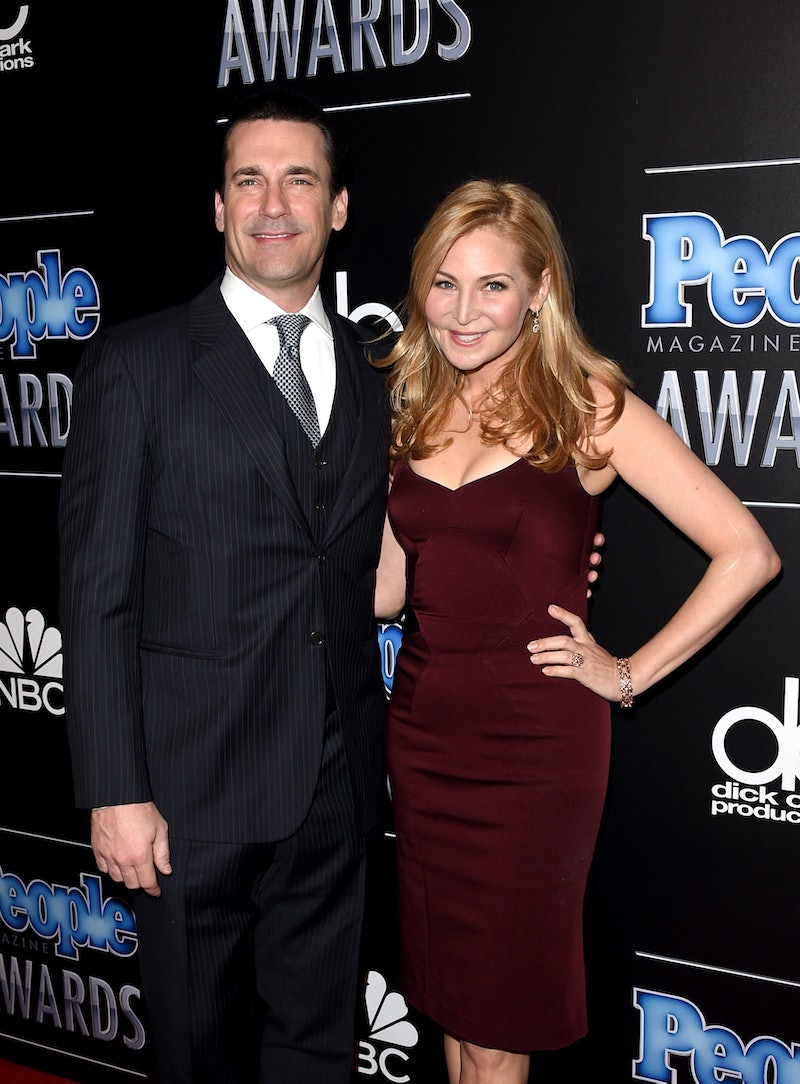 Forget Gwen Stefani and Gavin Rossdale, and Blake Shelton and Miranda Lambert — one of the saddest celebrity splits of last year was Jon Hamm and Jennifer Westfeldt, who broke up in September 2015 after 18 years together. Their breakup seemed almost inconceivable to fans of the couple, especially after Hamm credited his longtime girlfriend for her extensive support after he completed rehab for alcohol addiction. After such a long time together, it's only inevitable that fans are going to root for them to work it out — particularly as award season rolls around and dammit! We miss our Hamm/Westfeldt red carpet moments! But, is there a chance that Hamm and Westfeldt are back together?

As of right now, it seems that the jury is still out on that one, particularly as rumors swirl that Hamm is linked to his on-screen wife, Mad Men co-star January Jones. While InTouch reports that Hamm and Jones are "hooking up," a rep for Hamm told Gossip Cop that the report is "not true." With this rumor being squashed by a rep for the actor, does this mean that Hamm and Westfeldt are once again an item? Not necessarily, of course, but there have been some signs that their relationship may not be over yet.

After their split, Hamm notably thanked his ex during his 2015 Emmys acceptance speech. "It’s incredible and impossible for me personally to be standing here so, I want to thank the people to whom I owe an incredible debt, people who in my life have gotten me here, families who have chosen for some reason to take me in and be nice to me along this strange strange road," Hamm said, naming family members "and Cora and Jen."

Of course, just because the actor thanked his ex, it doesn't necessarily mean that they are getting back together. Regardless of their relationship status, it's still a nice gesture to thank someone who has supported you throughout your entire Mad Men journey and the past 18 years of your life. But maybe it's also a little hint at something — a spark that maybe their relationship isn't over for good.

A few months later, in November 2015, the two were spotted "arm-in-arm" at a tribute to their late friend, director Mike Nichols. The New York Daily News reported that Hamm and Westfeldt arrived at the ceremony together and the actress had her arm linked through her ex's, a gesture that prompted the newspaper to blare the headline "Exes Jon Hamm, Jennifer Westfeldt Get Cozy." To be fair, any former couple at a memorial for their friend would probably reach out in a gesture of support — but still, this same move could also be interpreted as a reconciliation.

While the jury is still out on the nature of Hamm and Westfeldt's relationship, it's inevitable that fans will be on the lookout for any (and every) clue that could mean they are getting back together. We can only hope, right?