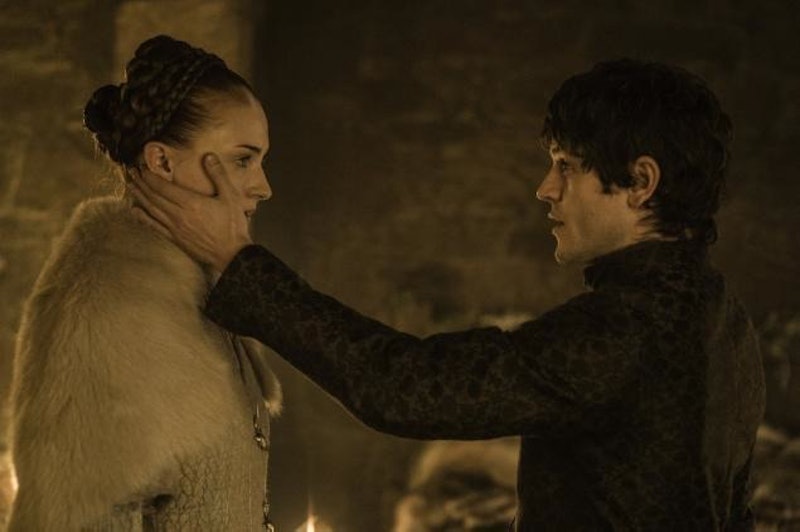 If there was one thing more tragic than Jon Snow's alleged death, then it was definitely Sansa Stark's entire Game of Thrones story arc. Not only was she forced to marry Ramsay Bolton (aka the WORST person in any world, fictional or otherwise), but then was continuously raped and abused by him right from the moment they said "I do." Even her escape from him was disappointing since it wasn't by her own doing. (Theon/Reek came to her rescue.) I guess what I'm trying to say here is that I want more for the eldest Stark daughter when Season 6 debuts. But part of me thinks that's never going to happen unless Sansa ends her marriage to Ramsay on GoT Season 6. The only question is, how long will we have to wait to see that happen?

Divorce isn't exactly something that seems to happen in Westeros (though I'm still a little confused as to how Sansa's marriage to Tyrion was no longer valid?), which means that the most likely cause for their marriage to end would be due to one of them dying. And while I suppose there's always a chance Sansa could befall a grim fate, I think we'd all prefer to see Game of Thrones' most ruthless character finally meet his maker. There's just one problem. We have absolutely no guarantee that Ramsay will actually die.

For those of you who are unfamiliar with the end of the fifth book in George R.R. Martin's A Song Of Ice And Fire series, Ramsay is still very much alive. And given that Martin has yet to produce the next book, we're kinda flying blind in regards to what Season 6 will have in store for everyone, Ramsay included. That being said, there are a few GoT set spoilers courtesy of the fansite Watchers On The Wall that confirm a battle will take place, reuniting Sansa with her half brother Jon Snow and even Ramsay himself. Now I wonder what would happen if Jon were to find out just how poorly Ramsay has been treating his sister. Granted, I would love to see Ramsay die by Sansa's hand, but if it becomes a tag-team effort between her and Jon during this battle, then who am I to stand in the way?

Keep in mind, of course, that this is just one possible scenario to how this little reunion will play out. Things played out a little differently in the books with Ramsay sending Jon a letter at the Wall after the Battle of Winterfell, informing him of Stannis Baratheon's death. So having them come face-to-face opens up a ton of possibilities. Ramsay's death is just the ideal scenario since it would not only free Sansa once and for all, but it would just make the rest of us feel really, really good. (Do you think this show has corrupted me? Be honest.)

But whether Ramsay dies or the concept of divorce starts catching on in Westeros, I think we can all agree that Sansa's marriage to Ramsay needs to end ASAP, by any means necessary. The Starks have been through enough. Having Ramsay as an in-law would just be too much to bear.