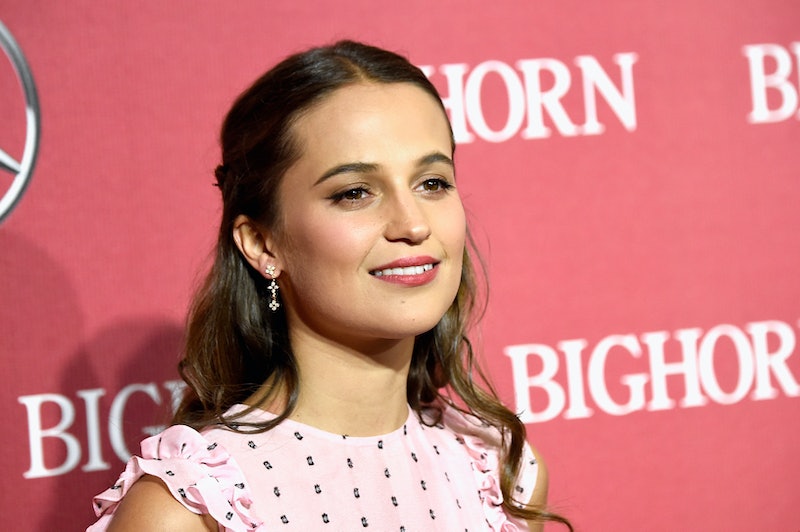 When I watched Ex Machina, I was immediately captivated by a new young face I had never seen before: that of Alicia Vikander. The Swedish actor has quickly become part of the Hollywood A-List after some incredible and consistent performances put her on the fast track to stardom. She is currently nominated for two Golden Globes: one for Best Actress, Drama for The Danish Girl; one for Best Supporting Actress for Ex Machina. But before she became one of the actors to watch this awards season, Vikander got attention for her relationship with Michael Fassbender. Late in 2014, it was reported that Vikander and her The Light Between Oceans co-star were together, so now, a year later, are Alicia Vikander and Michael Fassbander still dating?

The two stars seem to have first met when they were cast as husband and wife in the drama. Based on Fassbender's dating history, dating a co-star makes total sense, since he dated Shame co-star Nicole Beharie and X-Men: First Class co-star Zoe Kravitz. Fassbender and Vikander started filming in September 2014 in Australia and New Zealand and soon after, E! News reported that they were dating, with a source saying, "Michael and Alicia are casually dating, spending a lot of time together."

As for today, Vikander and Fassbender are still happily dating, and her recent admission about their New Year's kiss proves it. That said, even though it's only been little over a year between when they first got together and now, the couple has already dealt with rumors about their relationship.

In September 2015, gossip magazines started reporting that the couple had already split after about nine months of dating, but they continued to be spotted together despite the news.

Vikander told Vogue in her January 2016 cover story that she does not want to discuss her personal life very openly, but did allude to the split rumors. The writer noted that Vikander was about to fly to New York for Fassbender's Steve Jobs premiere, and the topic of the breakup rumors arose. Vikander replied, “I always believed there must be some truth to the stuff you read... But I learned.” Well, that seems to settle it.

Further confirmation came when E! News caught up with Vikander at the Palm Springs International Film Festival. She described how she rang in 2016 (with a low-key dinner), and when asked about her New Year's kiss, coyly replied, "I think I kissed my boyfriend."

Well, it certainly sounds like Vikander and Fassbender are still dating, so it'll be fun to watch these two talented actors support each other and possibly win big during this years awards season.