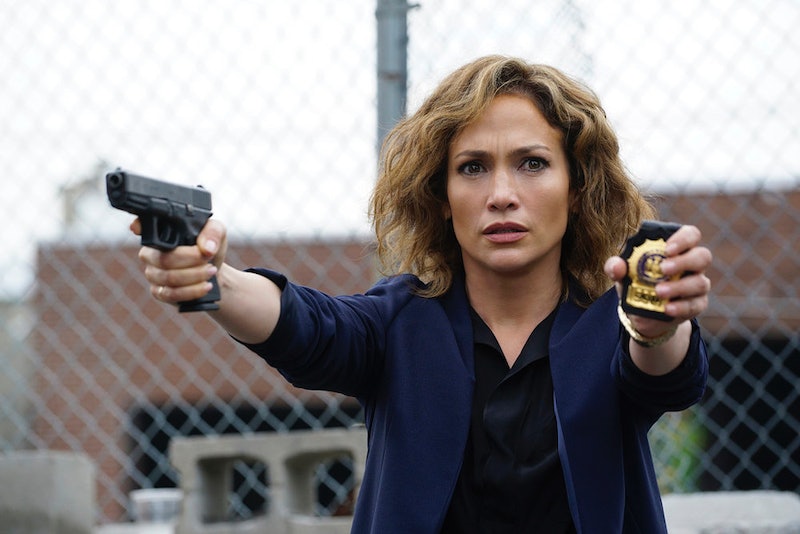 Basically, everything I know about the legal system I've learned from a myriad of crime shows like Law & Order, every city of CSI, Criminal Minds, Making a Murderer, and more. So, if asked, I'm pretty sure I could solve crimes that not even the most experienced detectives and profilers (industry term, NBD) could tackle. New to the scene is Jennifer Lopez, you may recognize her name, in NBC's Shades of Blue . The new police procedural drama, which follows NYPD detective Harlee Santos (Lopez), might sound look like your average legal show, but Shades of Blue is not like Law & Order or any other crime show you've seen.

It has been a long time since Lopez was on television and not judging the talents of musical hopefuls from around the country. In her new role, she plays lead character and NYPD cop, Harlee Santos, who is forced to become an informant for the FBI after partaking in one too many dirty procedurals under orders from her lieutenant, played by Ray Liotta. This isn't your average run-of-the-mill cop show. Instead, Shades of Blue is showing the dark side to law enforcement. We'll have to wait and see if Shades of Blue has enough new ideas to keep the interest of its viewers, but for now, let's look at how it differentiates itself from Law & Order and every other crime show out there.

It's About Dirty Cops

Usually, we watch shows about the good guys catching the bad guys. Shades of Blue is not like that. In the preview for the show, Santos shoots her partner — who accidentally shot a civilian playing a video game — to make the murder look like self-defense, aka it becomes pretty clear that her team is not categorically "good."

You Don't Know Who To Root For

In most shows, the detectives are the people you want to see succeed. Because this show involves a much more complicated storyline in that the cops aren't good, audiences should prepare for a rollercoaster of emotions trying to figure out if they should be rooting for corrupt Santos and Wozniak.

It Is Way More Than A Procedural Show

The show isn't a one-and-done kind of series like Law & Order in that after each episode the slate is wiped clean. The series' episodes build upon the last and create a season of content, meaning it won't be as easy to jump into Episode 5 and not need any background.

It Takes A More Current Look At The Justice System

The legal system is a bit murky in today's current climate, and Shades of Blue is touching upon that throughout the entire series. Some might find it a little close to home, but if we call it anything, let's call it timely.

The Characters Have More Depth

In Shades of Blue, Santos is asked to betray her crew and it's assumed she agrees because the FBI threatens to take her from her daughter. Unlike shows like Law & Order, which involve a bit of character backstory, Shades of Blue seems to be motivated by the personal lives of its characters.

So, is Jennifer Lopez's character good or bad? Will she turn on her team, or lose her daughter? There are a lot of questions to be answered once the show premieres.