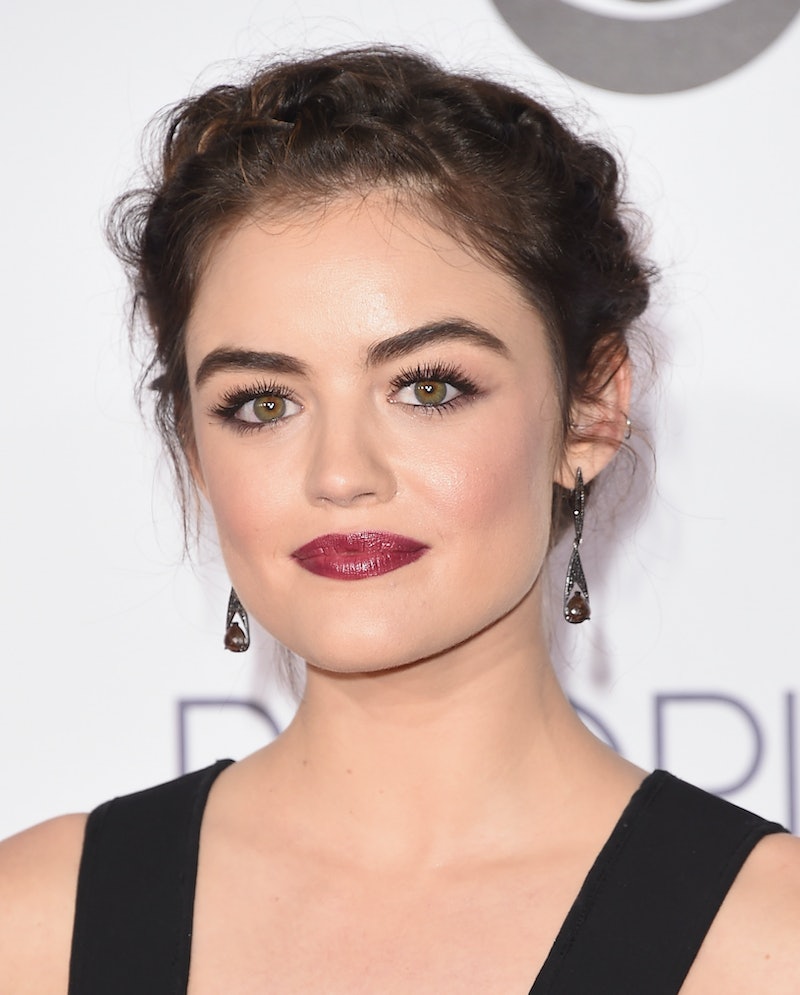 Hannah, Aria, Spencer, and Emily have style for days on Pretty Little Liars, but their real life counterparts are just as stylish off-screen. At the 2016 People's Choice Awards, the Pretty Little Liars cast look totally gorgeous in looks that were diverse, gorgeous, and perfect for their individual styles. Really, though, it's not surprise. Their super stylish looks make total sense given that the show could easily be one of the most fashionable on network television.

Pretty Little Liars has been a breakout smash since it first aired on ABC Family in 2010. From the moment that Lucy Hale's gorgeous smoky eye appeared on screen, fashion and beauty loving ladies knew they were in for a treat. Ask fans of the show which character has the best style, and you're bound to hear every lady at least a few times. While the characters' styles have basically become iconic to viewers, the ladies off screen aren't to be trifled with.

Ashley Benson, Lucy Hale, Troian Bellisario, and Shay Mitchell proved tonight that they're totally capable of rocking equally as stylish outfits as their fictional counterparts. Pretty Little Liar has five nominations tonight at the People's Choice Awards between individual cast nominations and an overall nod for the show. Basically, they decided to show out for the event, each lady looking more gorgeous than the last.

Hale gave us a sneak peek before she hit the People's Choice Awards, and her makeup look was enough to make anyone crazy excited to see the rest of her look.

On the carpet, Hale kept her signature dark lock swept back in messy dutch braids that allow her fierce makeup look to shine.

While pantsuits seem to be the theme for the night, Hale rocked a frock instead. This lacy, laced-up number is super vampy and gothic, a departure for the star. I'm a sucker when someone tries something different.

In Ashley Benson's sneak peek, she showcased a slicked back pony, and one hell of a smoky eye that would make Hanna Marin proud.

Once she hit the red carpet, Benson totally wowed in a long sleeve black mini with gorgeously embellished shoulders.

Her makeup game, while appearing smoky in her Instagram post, is actually quite pared-down. The fresh, dewy skin and nude lip is totally gorgeous and softens her slick pony.

In her pre-award show post, Shay Mitchell displayed a lash game that was so on point. I'm dying over that insane smize she's got going on.

Shay did not disappoint on the red carpet! Of the ladies, I've got to say that her look is my favorite. From her lash-driven smoky eye to that insane slit, to her KOTUR clutch, she was rocking one hell of a vampy, sexy look Wednesday night.

While her costars chose black for the carpet Wednesday night, Troian chose color, and the floor-length dress was definitely a departure from the other ladies, and I'm totally loving it.