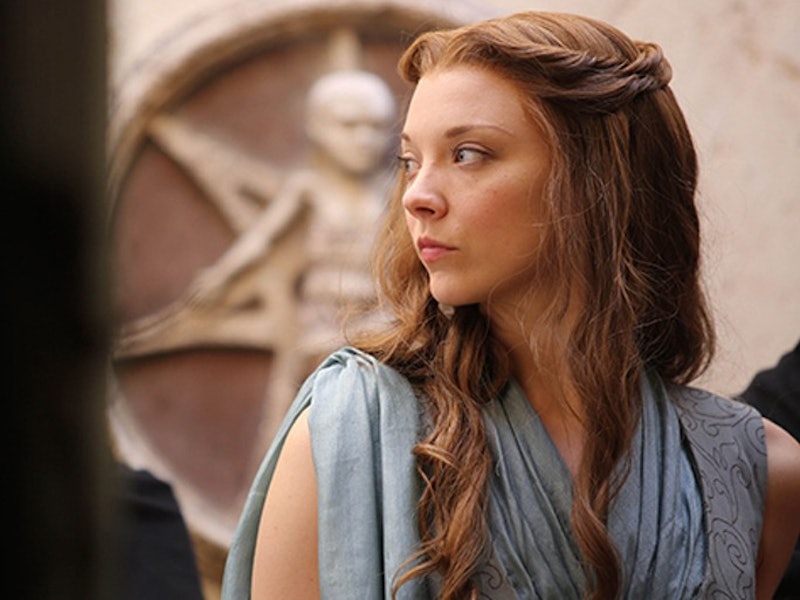 Fans dying to know what is next for the amazing Queen Margaery will be particularly happy with this Game Of Thrones Season 6 tease. During an interview on Jimmy Kimmel Live!, Natalie Dormer may have revealed Margaery's Game Of Thrones Season 6 fate. When fans last saw Queen Margaery, she was still tucked away in her prison cell awaiting her judgment from the Highsparrow. Cersei escaped with a walk of shame, but what the penalty for Margaery's alleged crimes would be remained unclear. Dormer is far too cunning to reveal a plot point as major as how Margaery gets out of her current predicament — but she did drop a hint about her filming locales in Season 6 that could hold answers about what is next for Margaery.

In her interview with Kimmel, Dormer told the late night host she filmed in Belfast (where many interior scenes are filmed) and Spain this season. That might not seem like much of a spoiler, but when you think about it, it might be: According to Game of Thrones' fan site Watchers Of The Wall, Spain might be playing host to King's Landing this season — but the country also serves as the filming locale for Dorne, and it would make the most sense for the Tyrells as yet unseen home base of Highgarden as well. So, what does this mean for Margaery? If you ask me, she definitely won't spend the entire season hanging out inside of a cell, so it could mean a lot. Even more telling, Dormer slips up and says, "I only read scripts that are relevant to Margaery and Highgarden... and King's Landing."

Here are eight things Dormer's filming locales could mean for Margaery in Season 6:

1. Margaery Is Back On The Throne

There is just no way the Tyrells would let Margaery endure a Walk of Shame, especially not one like what Cersei suffered. Between Tommen and the Tyrells, I have a feeling Margaery will be back on her throne in no time.

2. The Show Is Finally Going To Highgarden

Highgarden is meant to be a lush paradise, and I don't know about you, but when I think of paradise, Spain comes to mind. The Tyrells might whisk Margaery and Loras away from King's Landing and the Highsparrow's reach long enough to gather enough support to take the capitol as their own.

Given the fact that Margaery is beloved by the people, she might take her chances with a trial to clear her name. If she wins, then that would put her in an even better position to hold onto her claim to the throne and stick it to Cersei, who had to take a devastating public walk back to the Red Keep.

4. Jaime Rescues Margaery From Her Cell

Could Jaime and Margaery form an alliance this season? I know it sounds far-fetched, but on-set photos reveal Jaime playing a role in Margaery's story — and honestly, those two would be a blast to watch together. Imagine the barbs they would swap.

Hey, when Lady Olenna is your grandmother, you have to be crafty. If things start looking too dire, I wouldn't put it past Margaery to plan her own escape.

6. The Tyrells & The Martells Are Teaming Up

If the Tyrells and the Martells join forces to take down the Lannisters, I will completely lose my mind. The sheer number of awesome, powerful ladies onscreen at once will be mind-boggling. Since Spain is home to Dorne, I am not ruling this one out on the grounds that it would be awesome.

7. The Tyrells Are Waging A War

The Lannisters have so little power left, it is way past time for the Tyrells to rise up and take King's Landing free and clear. If their first move is taking out the Highsparrow and his little birds, then Margaery's sentence is going to end swiftly.

Nothing would infuriate Cersei more than seeing Margaery set free with no punishment whatsoever and an apology. Margaery is so beloved, this seems totally plausible. Imagine how wonderfully smug she would be when she came face to face with Cersei again, and how eager she would be for revenge.

Check out the video for yourself below and make your guess as to why Dormer spent so much time in Spain during the filming for Season 6.