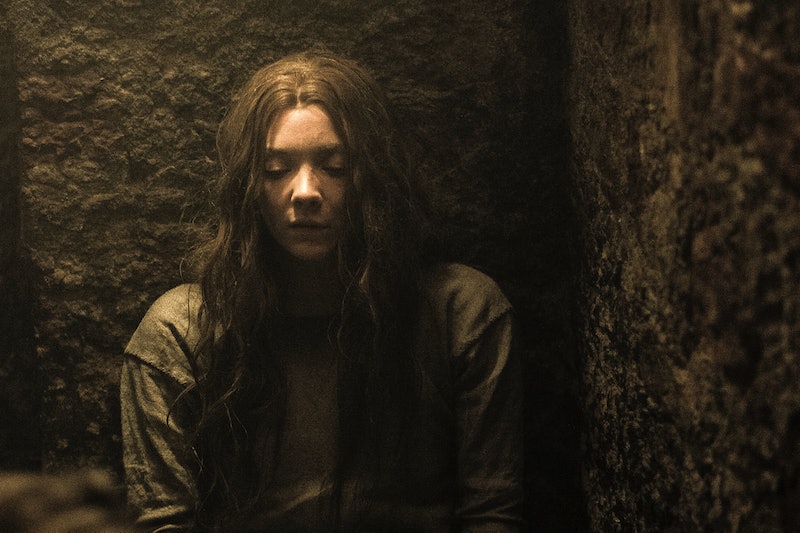 Game Of Thrones actress Natalie Dormer has taken a character that was somewhat two-dimensional on the page of George R.R. Martin's A Song Of Ice And Fire series and turned her into a complex, ambitious, fan-favorite figure who's one of the savviest players of the titular game. Natalie Dormer's Margaery Tyrell is simultaneously lovable and deplorable; sincere and manipulative; kind and conniving. Her naked thirst for power doesn't make her all that different from Cersei, but we like her more because she pursues it by being compassionate towards commoners rather than chopping off people's heads. So, Margaery's fans were unsettled when Thrones threw the young queen in a dungeon... and then proceeded to forget about her for the rest of the season. Where is she now and what will happen to Margaery in Season 6?

The last time we saw Tommen's bride was in the seventh episode of Season 5, "The Gift." Having just been taken captive by the Faith the episode before, we catch up with Margaery in a dingy cell, as Cersei taunts her... prematurely, as it turns out, since Cersei would have her own cell in that same dungeon before the episode was over. But, while we got to see how Cersei managed to worm her way out of prison — by confession to half her crimes and agreeing to go on a walk of penance — we never got another update on Margaery's condition in any of the season's final three episodes. #Rude.

I was half-expecting it to be revealed that Margaery had already secured her own release before Cersei, showing up free (and clean) on the steps of the Red Keep when Cersei finished her Walk of Shame. Alas, my dreams were shattered as Margaery presumably continues to rot in jail throughout the interminably long hiatus between seasons.

So, what can we expect to happen to our favorite young queen when Season 6 finally rolls around next spring? In the books, Margaery is eventually released by the High Sparrow on lack of any strong evidence. She will still have to stand trial against the accusations, although Margaery elects to go in front of a jury rather than go the trial-by-combat route that Cersei chooses. The outcome of said trial won't be revealed until whenever Martin deigns to publish The Winds Of Winter, but it's easy to imagine her getting off scot-free, since the charges of adultery brought against her are 100 percent bogus.

Unfortunately, it's harder to predict how the show's version of Margaery could possibly walk away from this conflict unscathed. Thrones completely changed the reason Margaery was imprisoned in the first place — for lying under oath rather than adultery — and that complicates things a bit. After all, she did lie: She knew her brother was gay and sleeping with Olyvar, even though she said she didn't.

If Margaery hopes to be found innocent, she and Lady Olenna will have to come up with some way to prove that Loras didn't sleep with Olyvar (even though he did, of course). This seems possible, since the only evidence the High Sparrow has is the word of a sex worker and an oddly-shaped birthmark. Did everyone forget that Olyvar was also Loras's squire? Is it so unlikely that he might have seen the birthmark while helping his lord get dressed?

But, even if Margaery is found guilty (god forbid), it might not be the end of the world. Unlike Cersei, she hasn't been accused of incest or regicide; the punishment for lying is hopefully much less severe than the punishment Cersei received. Like, maybe a few Hail Marys and a clothed walk of penance sans bell-clanging nun.

Whether she's found innocent or guilty, Margaery simply has to get out of prison, if only so she can live to deliver more one-liners to Cersei another day.

Need some ice for that burn, Cersei?