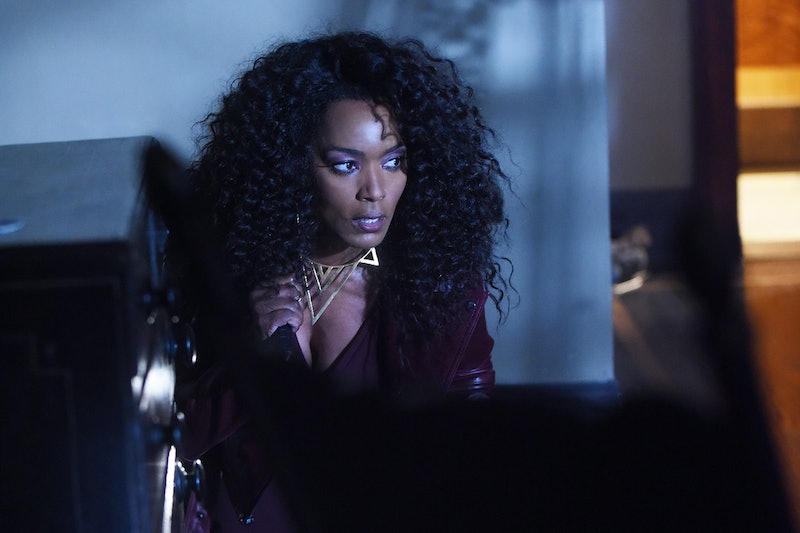 I am pretty sure that American Horror Story: Hotel is vying to claim the title for "most confusion over whether characters are actually dead or not." Wednesday's episode was full of carnage and fans even saw the death (and subsequent decapitation) of the Countess. Of course, it wasn't her true exit because she bit it on the Hotel Cortez grounds and immediately came back as a ghost to forever dine with Mr. March. (Lucky lady!) But, before the Countess met her end at the hands of John Lowe, fans saw her and Ramona finally meet again in what was promising to be a real battle royale. Unfortunately we were not given access to what actually occurred between the two of them directly before Gaga's death scene. So did The Countess kill Ramona on AHS: Hotel?

Well first, color me mistaken about the battle royale, because their meeting ended up being much more tepid and much less brutal. They basically told each other how amazing the other one looked and then made out. The Countess begged Ramona to let her leave the Hotel Cortez with her monster child and Ramona admitted to having a change of heart upon actually seeing her former love. Not exactly what I thought would happen when these two got together.

Viewers were led to believe that the two had sex, and then we were taken directly to the Countess being shot by John on her way out of the hotel. Without clear confirmation, we can't assume that she just left Ramona happy and alive in her suite. I mean, this is The Countess we are talking about. Gaga doesn't play.

At the very least, I think we can expect to see Ramona as a bonified Hotel Cortez ghost next week. She has some serious unfinished business and who knows what her recently acquired witches' blood will do for her staying power. It's anyone's guess at this point.