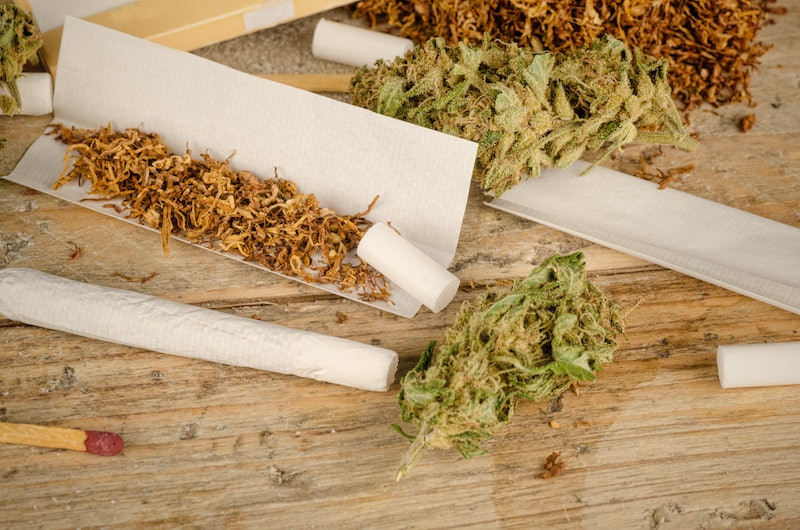 For years, I had a nightly routine of smoking a joint before I hit the sack. It quelled my anxiety and helped me sleep like the dead, so I enjoyed every second of it. After a while, though, I started to notice that my breathing wasn't the same anymore. During tough physical exercises, I got winded faster than the average person. Sometimes, I would even cough up yucky phlegm. Clearly, I didn't know yet that there were better options than smoking for consuming weed that are just as good, if not better.

With all the recent legalization in different states across the country, things have changed, and alternative ways of consuming medical marijuana have become more mainstream. As a result, I've learned a lot this past year about the effects of smoking weed, and I've been lighting up those joints less and less. I didn't like being confronted with the latest research about how bad smoking marijuana is for the body. (I don't want ugly lungs!)

Luckily, there are more than enough methods for you to still enjoy your weed, from cookies to new-age vaporizers to cannabis lip balm. It's enough to keep you entertained for many years to come — many years that won't do damage to your body. Besides, you deserve a little excitement in your weed-smoking life.

Here are seven reasons you shouldn't smoke marijuana, and should consider other methods instead.

Smoking's just not great for you, even if it's friendly Mary Jane. In fact, one puff of a joint has five times more carbon monoxide and three times more tar than one inhalation of a tobacco cigarette. In 2011, a study proved that long-term joint-smoking leads to respiratory problems, like coughing and wheezing, and airway inflammation. While there is no evidence at the moment directly pointing to the connection between lung cancer and marijuana smoking, it's proven that you put higher rates of carcinogens in your body with a joint than you do with a cigarette per puff, and those toxins are the very things that eventually lead to lung cancer.

Not to mention, when you light up a joint, it can burn as high as 2,012 degrees fahrenheit. The point at which weed starts to combust is 392 degrees, so you're well over the limit with a blunt in your hand. That means you've got combusted smoke going into your system, which contains over 100 nasty chemicals, such as polynuclear aromatic hydrocarbons and carcinogenic toxins.

What To Do Instead: Invest in a vaporizer. Vapes burn weed at a lovely 338 degrees, meaning you're preventing all those nasty chemicals from landing in your pretty, pink lungs. A recent study showed that vaporized gases contain 95 percent of cannabinoids (the stuff you actually want) and only five percent of unwanted components. Furthermore, vaporizing is said to protect the lungs from irritation by producing anti-inflammatory terpenoids — just a fancy way of saying it's better for your respiratory system.

2. Smoking Is Not The Most Efficient Way To Consume Marijuana

Spilled pot really is something worth crying over. If you're an avid joint smoker, you might be wasting your precious weed without even realizing it. Studies show that lighting up a joint only converts 25 percent of the THC; compare that with a vaporizer, which converts 46 percent of THC. That's a pretty big difference, which isn't surprising if you remember the different temperatures at which these both burn. If you're only converting a quarter of THC, consider how much product you'll end up wasting in the long run. It's blasphemy.

Plus, think about all the rolling papers and filters you have to constantly buy just to keep your smoking station well-stocked. Your wallet will suffer from all that spending over time.

What To Do Instead: Either vape it or bake it. There's plenty of science out there to convince even the most stubborn person that the former will save you time, money, and marijuana. All it takes is a one-time investment (which isn't all that much if you get a mid-size model). Then there are the edibles: you can even make a batch of perfectly good magical brownies simply by using the remains of your stash.

3. You Might Be More Likely To Get Paranoid & Anxious

When you smoke, your heart could potentially beat two times faster for the next few hours. This is because your blood has been triggered to flow more to your brain, leaving your heart a bit lonely. Cue the anxious thoughts, the clutching of your chest, and the freak-out moments. (That stuffy lung feeling doesn't help, either.)

That said, there are different findings on this topic. Some research teams have found that smoking medical marijuana can reduce stress, while others claim that it actually induces anxiety in people who already struggle with it. One study even said lighting up a joint often enough can have a similar effect on the brain as schizophrenia. It's different for everyone, and there's no one right answer. You'll know which category you fall into; if it's the one that causes you to panic more often than not, maybe consider going down an alternative marijuana route.

What To Do Instead: If you tend to get paranoid, allow the magic of medical marijuana topicals and tonics to wash over you. These are non-psychoactive products — perfect for those who don't want the cerebral side effects of pot smoking. You may not get stoned like you would off a blunt, but at least you won't be running around paranoid and bug-eyed. Try out cannabis teas as well; they're known to curb mental anxiety and calm you down.

4. You Miss Out On A Lot Of The Healing Properties

Sure, you get super blazed when you smoke a few joints, and that's great and all. But these days there are so many more recognized reasons to get high that you would be a fool to limit yourself to just smoking. If you're the kind of gal who only utilizes medical marijuana via joints or bongs, you might be missing out more direct health advantages, including less inflammation and chronic physical pain.

What To Do Instead: You've got lots of options here. Applying topicals can relieve pain while their antibacterial qualities take care of minor knicks and bruises. Medical tinctures and tonics can reduce muscle spasms and cramping, and they are also known to be very useful for cancer patients going through chemotherapy. Some cannabis-infused lotions even help with physical soreness. Experiment with a few different products and see which one elicits the best results.

Marijuana burns pretty quickly — sometimes not very evenly — when you smoke it as a joint, not leaving you without much room to control how much is going into your system.

What To Do Instead: Pretty much every other option will help you manage the intake more effectively. You can take smaller, shorter hits of a vaporizer without it burning through too much product. With the medical topicals and tonics, you're probably given instructions on how much to use and how often, ensuring you get the most of your marijuana experience.

6. It's The Least Discreet Way Of Enjoying Medical Marijuana

You can't smoke a joint anywhere you want quite yet — well, you could, but you might not be happy with the consequences. Say you're the kind of person who really benefits from medical marijuana and your prescription allows you to purchase it legally. Lighting up a joint or taking a hit from a bong still might not be best idea because of the potent scent. You and your pot have got to get a bit more creative.

What To Do Instead: Back to the vaporizer! There are so many compact yet chic models out there that can fit into the smallest of handbags, allowing you to vape virtually everywhere with virtually no scent. The tonics, topicals, teas, sodas, and infused snacks are good options too. No smoke or suspicious scents to blow your cover.

If your favorite ice cream parlor recently upgraded to include a whole section of new flavors, you wouldn't still exclusively order vanilla, would you? By only sticking on one path to medical marijuana, you're risking boredom. Explore a little bit more and not only will you find something fresh that tickles your fancy, you'll ensure you never get sick of one of your favorite pastimes.

What To Do Instead: Ever tried baking? Going down the edible route can be really fun — and even more delicious. To spice things up, invite some other friends over so you can experiment together with new medical marijuana products. It doesn't mean you have to give up smoking forever; there's just no reason to limit yourself when the world of weed is full of possibilities.

More like this
Young People Are Still Experiencing Period Poverty In UK Schools
By Sophie McEvoy
The Best Sunscreens For Pale Skin
By Adeline Duff
Is It Actually Bad To Cut Your Cuticles?
By Stephanie Chon and Paris Giles
How Skin Care Experts Are Stepping Up To Support Transgender Patients
By Audrey Noble
Get Even More From Bustle — Sign Up For The Newsletter