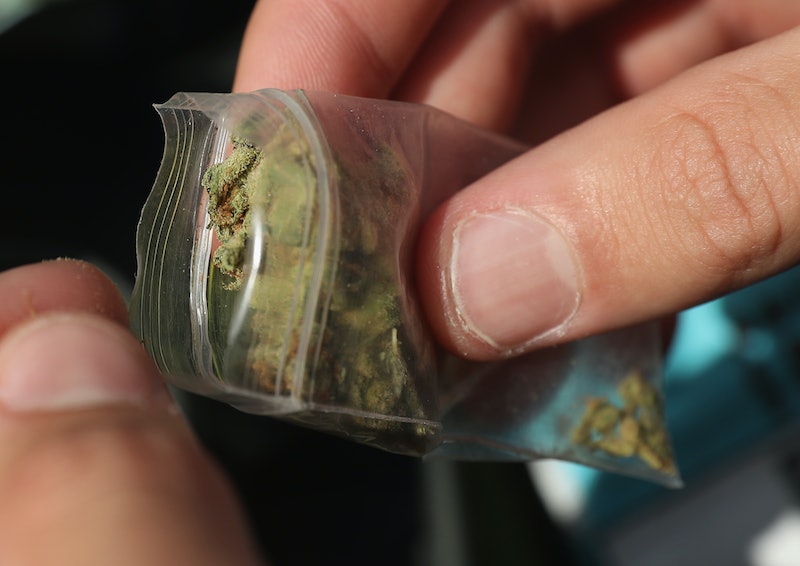 So you’re at a party, and someone says something ignorant. And while you know that they’re in the wrong, and that you could totally engage them and win if you were a bit more prepared, your words escape you. To make sure that doesn’t happen, we’ve compiled a series of handy reference guides with the most common arguments — and your counter-arguments — for all of the hot-button issues of the day. This week’s topic: How to argue that marijuana should be legal.

Your Response: In that case, you must also support banning alcohol, right? Because alcohol impairs judgment and causes people to act recklessly. Drunk driving alone kills around 10,000 people every year.

Your Response: Actually, it’s not. You must be thinking of alcohol and tobacco. Here’s what the Institute of Medicine of the National Academy of Sciences has to say about marijuana as a “gateway drug:”

The whole “gateway drug” argument is based on a common, well-documented logical fallacy.

Your response: Only for roughly nine percent of people who smoke it. The other 89 percent are just fine. By comparison, around one third of tobacco smokers become addicted, as do 15 percent of booze drinkers. If we’re going to ban drugs based on how addictive they are, marijuana should be rather low on the list.

Common Argument #4: Marijuana is bad for you.

Your response: So are donuts, cheeseburgers, and candy. Should every ingestible substance with the potential for harm be made illegal?

And marijuana is nowhere near as bad for you as cigarettes and alcohol, both of which are legal. Overdosing on alcohol can kill you, as can the drug’s withdrawal symptoms (it’s a damned-if-you-do, damned-if-you-don’t sort of thing). The Center for Disease Control attributes around 37,000 deaths every year to alcohol (not including accidental deaths), while prescription drugs kill one person in the United States every 19 minutes.

You know how many people have died from a marijuana overdose? None. Ever. The CDC doesn’t even have a category for marijuana-related deaths. The largest-ever study of marijuana’s affect on the lungs concluded that there is "no association at all" between marijuana use and lung cancer, and that smoking weed may even offer some protection against cancer.

While there are studies suggesting that teenage marijuana use results in lower IQ, that’s a reason to set the legal age to smoke at 21, not a reason to make the drug illegal for everybody.

That being said, marijuana’s legal status makes it very difficult to study its health effects, seeing as most such studies are illegal under federal law.

Common Argument #5: There is a reason why Marijuana was made illegal in the first place.

Your response: Where to begin with this one? Let’s start by looking at the document that caused marijuana to be placed in Schedule I, the federal category reserved for drugs with the highest potential for abuse. That document was a letter, written in 1971 by Assistant Secretary of Health Dr. Roger Egeberg and sent to Congress. It read, in part:

Since there is still a considerable void in our knowledge of the plant and effects of the active drug contained in it, our recommendation is that marijuana be retained within schedule 1 at least until the completion of certain studies now underway to resolve the issue.

Got that? Marijuana was classified under schedule I due to a lack of evidence that it was harmful, not an abundance. The original plan was for it to remain under Schedule I only until the National Commission on Marijuana and Drug Abuse released its recommendations as to how to proceed. When that commission subsequently concluded that there wasn’t any medical basis for banning marijuana and suggested that it be decriminalized, then-President Richard Nixon ignored the recommendation, and the drug remained illegal.

Not to mention, federal drug scheduling in the United States makes precisely zero sense anyway. For example, heroin is Schedule I, while fentanyl, a drug 20 times more powerful than heroin, is Schedule II. Salvia divinorum, which is exponentially more psychoactive and disorienting than marijuana, isn’t even scheduled, while cocaine and methamphetamine are both Schedule II, meaning the government has deemed them to have a lower abuse potential than marijuana.

If you’re looking for logic in federal drug laws, don’t. You won’t find any.

Your response: Yeah, it does. There are many studies backing this up, but we’ll just look at one. In 2010, the University of California Center For Medicinal Cannabis Research conducted the first clinical trials on the effect of smoked marijuana in over two decades, looking particularly close at marijuana’s affect on neuropathic pain. The study concluded that there is "reasonable evidence that cannabis is a promising treatment in selected pain syndromes caused by injury or diseases of the nervous system, and possibly for painful muscle spasticity due to multiple sclerosis."

Here is a detailed list of the international, national, state, and local health organizations that have come out in support of medical marijuana legalization. They include the British Medical Association, the French Ministry of Health, Kaiser Permanente, the American Public Health Association, the American Nurse’s Association and the Multiple Sclerosis Society.

Common Argument #7: Synthetic substitutes are just as beneficial for medical marijuana patients as the real thing.

Your Response: They’re not. The only FDA-approved substitute for marijuana is Marinol, a gelatin capsule containing a synthetic version of tetrahyrdocannabinol (THC). The problem is that marijuana’s therapeutic applications arise from several of the drug’s components, and THC is only one of them. For example, cannabidol (CBD) has been shown to have analgesic, antipsychotic, anticonvulsant, and antinausea properties, yet it’s nowhere to be found in Marinol.

Your points, to review: