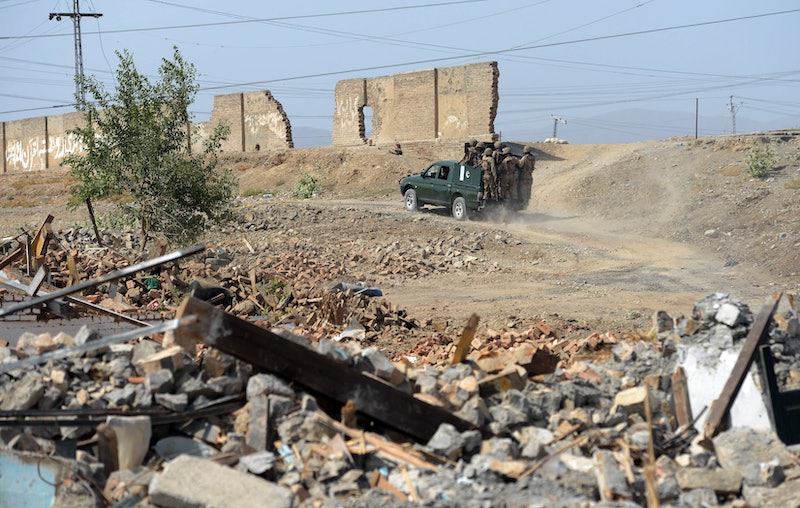 While exploring Bowe Bergdahl's time in captivity — and particularly his captors — the fourth episode of Serial, released Thursday, got into the Taliban-Pakistan relationship, some complicated territory in international relations. The two sides have at times conflicting priorities, but Pakistan will often ignore Taliban activity for their own best interest. As Sarah Koenig explores, the sect of the Taliban that held Bergdahl, the Haqqani Network, operates largely within Pakistan.

The Taliban is a large group and the Haqqanis technically are part of the bigger umbrella, which is led by Mullah Akhtar Mansour. According to the Institute for the Study of War, though, the Haqqanis "maintain distinct command and control, and lines of operations." The report says the group is considered the most "experienced and sophisticated insurgent organizations" in Afghanistan. But their home base is in North Waziristan, Pakistan, where Bergdahl was mostly held.

The New York Times article on the Haqqanis calls them "the Sopranos of the Afghanistan war." They are one family working in the varied businesses of kidnapping, extortion, smuggling, and — believe it or not — trucking. In the Pakistani town of Miranshah, they have set up their own mini-country with courts, tax offices, and radical madrasa schools that train more fighters.

David Rohde, whom Koenig interviewed on Thursday's episode, said that spending time with them opened up his eyes to their larger goal, much more extreme than he had previously realized. In an article published by the Times after his own time in captivity, Rohde wrote:

Living side by side with the Haqqanis' followers, I learned that the goal of the hard-line Taliban was far more ambitious. Contact with foreign militants in the tribal areas appeared to have deeply affected many young Taliban fighters. They wanted to create a fundamentalist Islamic emirate with Al Qaeda that spanned the Muslim world.

You'd think this might give Pakistan some pause, seeing as they want their own government, not the current Western-allied Pakistani government. But The Times' Haqqani exposé goes on to explain how Pakistan has supported them and used them.

American officials accuse the Haqqanis as being a for-hire army that is contracted by the Pakistani intelligence agency to carry out attacks in Kabul and Afghanistan that are in Pakistan's best interest. Many American officials say there is little hope of Pakistan changing course, the Times reported. "Some have become convinced that after 10 years, it's a bridge too far to try to change Pakistan's strategic calculus," Col. Bob Cassidy told The Times. He served in Kabul as a top aide to a senior American military commander there.

Some experts say that their relationship is a result of Pakistan wanting more control in Afghanistan. Carlotta Gall, a Times journalist, said on PBS NewsHour that Pakistan pushes the Taliban to do what it wants inside its neighbor. The group, she said, is "pushed in to get leverage over Afghanistan, to have control and have a proxy army there for Pakistan"s benefit."

The relationship between Afghanistan and Pakistan is also complicated. The two share many commonalities — historical, religious, and ethnolinguistic — among the Pashtun people that live in both countries, for example. They are also both U.S. allies. On paper, this sort of thing shouldn't be happening, but Pakistan has worried about its neighbor since the Soviets invaded. They also worry Afghanistan could grow to friendly with India, its biggest rival.

The second season of Serial focuses on Bergdahl, the accused Army deserter who spent five years as a Taliban captive before the White House negotiated his release in May 2014. In December Bergdahl was court-martialed and charged with desertion and endangering troops; the maximum sentence would be life in prison. He deferred entering a plea, meaning he neither pled "guilty" nor "not guilty." Bergdahl’s next hearing is Tuesday, Jan. 12.